My men were all out for the evening.

I figured I could make them proud of me.

Amazon had delivered the replacement for the failed little black fan that day and the YouTube video explained how that failed part was making everything in the ‘cool’ part of the refrigerator warm.

Convincing my men that the slightly purple tinge to the sour cream was a natural source of probiotics and that blinky milk was a ‘thing’ had lost its appeal.

Not known for my patience, I planned to follow the instructions, which seemed simple, take my time, and fix this dad blasted thing.

According to “Bearded Appliance Repair Guy“, the main thing you had to be wary of was removing the accumulated ice. It all needs to be removed. I mean every last bit of it. A blow dryer is too hot, but a steam cleaner is just right. The comments section verified that this worked but could take 40 minutes.

Let me set the stage.

In my galley kitchen, every counter space was filled with whatever had been in my warm refrigerator. All of the refrigerator bins, dividers, and glass shelves took up space on the floor and sink. The French door was splayed open, the plastic panel on the back exposed and ready to be removed, so that once the faulty fan was out, it could be replaced. The stupid “you-left-your-refrigerator-door-open reminder had played its obnoxious notice for 20 minutes.

I filled the steamer full of water and waited patiently.

It seemed to take longer than I remembered to start making steam.

I checked the valve on top and a bit of steam escaped as I unscrewed it a bit.

I tightened it down.

Finally, the hose sputtered a stream of water and moist, hot steam filled the appliance as I shot at the ice.

Trying not to rush, multiple times I laid the hose down and gently tried to move the plastic panel. After a good twenty minutes, I aimed the hose, pulled the trigger, and nothing.

“It’s probably out of water,” I said outloud to no one.

You remember hearing stories of housewives using their 1950’s pressure cooker, the pressure escape valve malfunctioning, and it exploding?

Yeah. That. Bending over the little McCulloch steam machine, I stood in the gap of steam spraying to the ceiling and falling over everything everywhere. My nose got the brunt, but that’s not counting that at least 40 % of my face was burned.

I knew I was in trouble when the skin from my forehead came off with the first swipe of ice in the plastic bag.

By the time my John got home, I was flying around the kitchen, holding said ziplock bag of ice on my face and alternating between panic for how much damage I had done to how was I going to finish this job.

It wasn’t a mess that anyone wanted to handle. But my John did.

“Go sit down and try to calm down,” he said, as he deftly steamed and removed the ice, replaced the broken fan, and reassembled the refrigerator plastic panels, finding the screws for all the parts amid the chaos I had created.

“Keep the ice on your face. I’ll be back,” and he left out the back door to get Marco.

What I wouldn’t know until later, was that Marco figured what John told him had to be an exaggeration.

What Marco saw shocked him.

He gently sprayed aloe vera on my face, his kind, brown eyes formulating a conversation that we would have with me when things settled down.

John restocked the refrigerator with the items that had not spoiled and they both cleaned the weird white, dried fine spots of steam that had settled on everything.

“Janet, you try to do too much,” Marco said, hesitating to see how I was taking what he was saying. He continued with a logical, kindly administered, loving admonition to consider more carefully how I go about and choosing hard tasks.

For two days, my eyelids were swollen and layers of skin peeled, multiple times it seems.  I googled what the difference between a second and third degree burn. A friend from work researched her stores of oils and salves and made a little soothing roller that I used for the next six days. It was miraculous as far as I could tell.

I thought about the times my sons reminded me to be more patient in the goals I set for myself.

“I wish I’d been there to help, ” said Josh, once the report got to him.

It pays to take good advice. There was more than one error I made and I am blessed to have a family who cares enough to help me with constructive criticism. 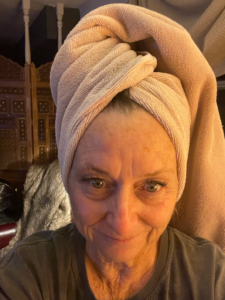 I think they love me. A lot.

Addendum: Like one of my favorite people said, “Janet, you and I don’t have the prettiest skin, but we sure do have the skin that heals nicely.”