“I’m going to come down the last weekend of August, if that’s okay?”

That was my brother’s son,  a young man busy understanding life. I’ve been in and out of his months and days since he was born. Having lived close enough for spontaneous visits only about 6 months of his two decades, I haven’t seen as much of him as family should.

He walked up the drive, tall and lithe, bespectacled, and clean shaven, his back straight and a light dusting of very faint freckles across his nose. Genetics. He looked like my side, a son and brother of mine, and then parts of him reminded me of his Mom’s side. His hands for instance.

He hugged me. Hard. I thought of the little, hefty 2 year old that a very long time ago had waddled up that very same drive but in strides much smaller and less steady.

He traveled light, only a small backpack, one that looked like it might have come off of the shoulders of my oldest son 15 years ago. Not too many others would have chosen this particular pack. Maybe only those two.

“This is peaceful,” he said, as we clustered, him, me and his Grandmother, on the tiny back porch in cushiony chairs, rain dripping from the eves and trees. We were waiting for the rest of the family and dinnertime.

“Tell me what you’ve been doing,” I asked him.

My nephew told me about his staging (pronounced “stazhje”) in various restaurants the last several months. He was spending time with various chefs, among other observations, noting their personalities. He attended to their their creative expression, both in the concoctions they created and the staff and customers that were parts of the whole of each restaurant. As he talked and I listened, I realized that cooking, the art and chemistry of it, had captured him. It had molded a few of his dreams and hopes, and whether or not those would end up prescribing some part of his future, neither of us knew. But, for this moment, we were in the same place. Two cooks enjoying the aesthetic pleasures of culinary exploration.

“I have to make you the no-knead bread we make at the restaurant.”

“I’ve got bread flour and yeast,” I told him.

He bought me a dough scraper.

I should have already had that.

He bought me a dough whisk, leaving me to wonder how I had never even known of the existence of that thing after living this many decades and filling my kitchen air with all manner of yeast and flour.

He measured out 400 grams of bread flour, 300 grams of water, 10 grams of salt, and 2 grams of yeast, mixing it all together, put it on my counter, topped with plastic wrap.

Now if you don’t know, letting all that yeast ferment and leave byproducts in your bread is what makes bread taste absolutely wonderful.

“See how the membrane is starting to form?” he said, having fun.

“This is a very popular recipe that was printed in the New York Times by the owner of Sullivan Street Bakery.”

“The secret is that it steams in the cast iron.”

My well seasoned cast iron, deep-sided skillet with its heavy lid had been heating up in my 450 degree over. Dylan plopped the proofed load gently on its top into the hot skilled, covered it, and we quickly moved it back in the oven.

“Thirty minutes,” he said, setting the timer on his iPhone. “And then 1o more with the lid off.”

Look delicious to you? 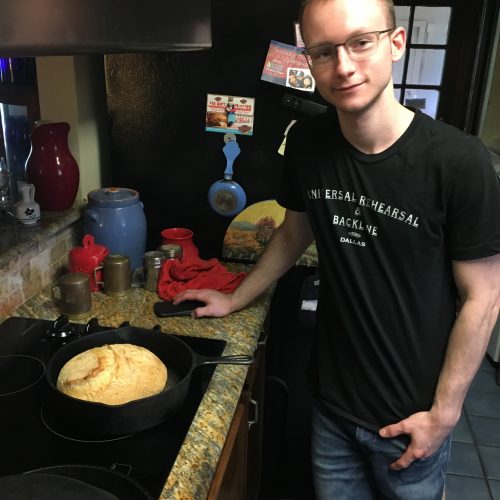 You should try this. With someone you love. And share it with others you love too.

Here is the original recipe from NYT. We did Dylan’s version of this. It’s all good.