What’s In A Name

“When I was a young woman, the girls that put out got to ride in the convertibles.”

Mother said this while she was having her morning coffee on her balcony.

I had not been listening too much.

” Did you hear what I said?” she asked, punching my foot with her foot, her balcony that small and our chairs that close together.

“I never got to ride in a convertible, if that tells you anything,” shes says.

I guess that was the answer to a question I had always wondered. Not.

“It was always the popular girls who were the ones who put out. Is that the way it was when you were a teenager.”

Mercy. She didn’t wait for an answer.

“I wonder what girls get today when they put out.”

I don’t say that. And I only briefly wonder where oral sex falls on the 40’s spectrum of ‘putting out’.

This seems to be a real question.

“Well, it was between Maybian and Janet, because those were the two most popular girls I knew in high school.

Maybian? Is that a real name.

Popular in the 40s and 50s, currently on three instances of the name, all in Arkansas.

“Maybian was the most popular. She was truly beautiful. She was very rich. Every girl wanted to be like her. She knew it too. Janet on the other hand wasn’t so pretty, but she was kind. She had a medium amount of money. Your dad said no way were you going to be named Maybian. You were his Janet. I am glad that was the name you ended up with.”

There was a time when I was about 6 that I wanted to change my name. To Annette. She was the pretty mouseketeer. By the time I was 8 she would have very large breasts and become the most popular mousekateer.

“Wonder what ever happened to Maybian. Her name was Maybian Cooke. See what you can find out, Janet. That’s probably why I have always liked convertibles.”

If you google Maybian Cooke, the Courier News of Blytheville, Arkansas, in the society column, is full of Miss Maybian’s entrance to society, some odd 70 years ago. She would be voted The International Sweetheart of the Kappa Sigma Fraternity. One might read into the details that she was out for a particular young man, them having been reported in the Courier to be hosting parties and spending time at each other’s home. In the end either the guess would be wrong or seomthing interfered for the up and coming young man would marry another, live to be an old man with children and grandchildren and lots of money.

“Did you find her?”  Mother asked.

“Not really,” I answered.

I could find no trace of her, other than that one spectacular year.

“Ahh well. Who knows how she turned out.”

“Have you seen those commercials on TV for feminine products, Janet?’ she said.

“What are those all about? There’s wipes, and creams, and I don’t know what all. It’s a wonder I lived so well till I was 84. I guess it’s been God. I think there have been a lot of times He said, Doris, you shouldn’t do that, but I will take care of you.”

“I wasn’t really through talking,” she said. “I never heard anyone say that other Janet was stubborn. That’s one thing that you added to that name. But that’s okay. You’re my Janet.”

Yep. I am. A Maybian I was never meant to be. 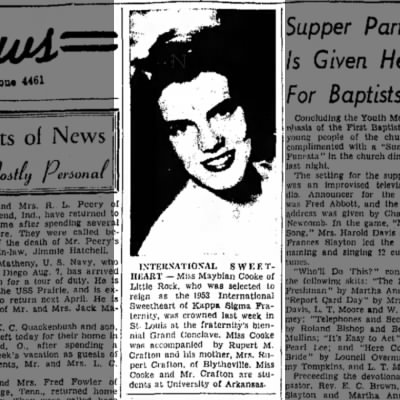