Bloomers Is What They Used to Call Them

“Do you know what we did before there were panties?”

The two men in the back of the truck almost swallowed their tongues. The air was filled with that unique male apprehension caused by the uncertainty of what forbidden topics females might introduce into polite conversation. This despite the coarseness of most male chatter when they are in charge of the conversation.

“Mother,” I said, my hands on the steering wheel but glancing over at her, admitting to myself this was a bit of an unusual subject to bring up on our way to the farm with her son-in law and grandson now firmly inattentive to their smart phones, immersed in hoping that somehow that comment was going to evaporate and end. “Remember Bob and John are with us. Is this going to be appropriate in mixed company?” I had  no time to write this on her white board. I pretty much yelled it at her.

“No really,’ she continued, clearly having heard at least the jist of what I’d said and reassuring me, started to explain.

I did not have time to get it out of my mouth: why in the world did this topic pop into her head.

“We called them bloomers. And you didn’t go buy them, you made them. Out of flour sacks.”

Whether this was turning out not to be one of those things you cannot possibly ever want to hear your grandmother or mother in law ever say and you were so relieved you were compelled to listen  or it was the way she said it, she had the attention of the back seat.

“Yeah,” she said, her face lighting up a bit. “The flour came in 10 pound bags and once you had used it up, the material was used for a lot of things. But bloomers were certainly high on the list. There weren’t any other options.”

“How much material is in a 10 pound bag?” one of them asked from the back.

“Enough to make bloomers,” she answered. “We would sew elastic into the legs. For modesty.”

There was a slight hiccup in the air, as that visual rested in our collective minds.

“They could have made money,” said Silent Bob, “if they’d thought to make flour sacks with designs.”

“They did!” Mother said, clearly remembering them in her mind. “I guess if you had a big butt, you had to use 2 flour sacks that wouldn’t match.”

I heard a faint ‘uhoh’ from the back, as she continued.

“Well at least, you could tell the front from the back.”

We all pictured that.

The conversation didn’t end. We covered itching probabilities. And yes, we went there. Menstrual cycles were way more problematic before Maxipads. Flour sacks had multiple and varied uses in the 20s and 30s and Mother’s story was a testament to the careful use of resources that were certainly part of that era and always a part of my mother and her generation’s sensibilities. This was the era way before plastic came on the scene.

“Mother, why in the world did you think of bloomers,” I asked her as the back seat occupants were back to whatever their smart phones were offering. Although they and me were just a little bit changed by her reminisce. We all now had a bit of knowledge from a different time and a different place in our heads and hearts. We knew a little more about her and a little more about how one might think of resource management and a bit more about how life has changed. The older I get the more I realize that we are becoming a culture who doesn’t realize how context matters, whether it be about forming opinions, understanding your history, or seeking truth. The morning ride to the farm had been a good thing. A very good thing.

“It was the billboard back there.”

“What?” I asked, trying to reconcile flour sack bloomers with 21st century advertising.

“You know that garden center in Navasota, Martha’s Bloomers. They have a billboard back there. It just make me think about the old use of that word.”

You never know what’s going to prompt a little blessing. God has planned life to be pretty cool that way. 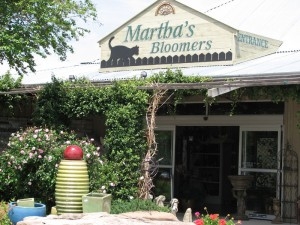