I know M because about 8 years ago and for every two weeks since, M has come to my house to help my mother and I keep it clean. She learned her craft from her mother, Isabelle, a woman who I know of only because M has told me of her. Isabelle passed onto Heaven too early. M named her daughter after her mother.

Over these years, M and I have shared our life. We have each suffered the loss of a son. She didn’t know my Jake but I knew her sweet Brian. I have told you about Brian. He was a sweet boy.

M and I have held each other, cried on the others shoulders, and adopted each other, because we are family in Christ. She prays for me. I pray for her. We live our separate lives most of every day, but there are the days that our friendship shows off in ways that neither of us expect.

Yesterday she had a long day at my house. Because of the holidays, daughter Isabelle had to be picked up from school early and that broke the day in half for M because she lives an hour away from where I do.

“I’m going to pick up Isabelle and then come back and finish,” she told me over breakfast. “Don’t worry,” when she saw my look, “I have been planning it.”

“I hate for you to have to come all the way back here.” She shook her head. One of the things I like about M is her dedication to her work. She is responsible, smart, and conscientious. But more than that, she runs her business with a great deal of professionalism. In another world she would have been an executive in a company.

There is another thing I admire about M. She knows how to live in the moment. I like this about her because I struggle with this. I live my life in a hurry. Even when we stood in the hospital, hovering over Brian and then later as she said her goodbyes to him, she took her time and let herself consider what she and he had been to each other. She had confided to me that she would love to have another child and it wouldn’t matter if the child had special needs, but her heart couldn’t stand the loss of another.

It was later afternoon as Mother and I sat on the patio,  enjoying the winter sun slanting very far west, when I heard Isabelle come up the drive.

“I brought you something,” M said, as she tagged behind her daughter.

In her hand was a heavy, bulging yellow plastic bag. I could see containers through the thin plastic, but it was the smell wafting across the slight wind that made Mother, me and the dogs take notice.

M had a huge smile on her face.

“I got you that Mexican roasted chicken you say you like. There are charro beans, rice and red and green sauce. And great corn tortillas.”

I realized then why she told me she had planned her day the way she had.

An hour later, we would set the table and my family and hers would sit and share that meal she had planned and provided. The chicken was the best I have ever had, falling off the bone, moist and tender, tasty and nourishing. We shared Spanish words for the perfectly roasted onions, their slender layers sliding off and peeling back, each of us greedy in grabbing at the stack of tortillas. We’d blessed the meal before we started. And blessed was what we felt as we laughed and ate and shared an evening meal and the love that can only come in ways that aren’t understood by science or facts of birth or blood. Because its love that fostered the atmosphere. It’s love that prospered the gift. It came from the heart of M and then spread around the table, overflowing, each of us basking in a gift that has little to do with price and everything to do with a heart that hopes to spread joy. It came from the love M harbors inside her as we move through this life, awaiting the next.

Dinner was over and plates were being washed and Mother had struck up a conversation with Isabelle. As Mother asked questions, Isabelle wrote her answers on Mother’s white board. It was a good kind of practice, a good kind of gift, for a sweet second grader who is finding her way around missing her baby brother Brian, exemplified in her lack of confidence in school. But Isabelle is good with numbers. “Let’s draw a Christmas scene,” Mother said to her, as the black marker streaked across the white board. “Can you draw Santa and his reindeer,” Mother asked Isabelle.

Her dark head down, the slim brown fingers with her nails decorated red and green, Isabelle took to the task. As Santa’s familiar beard and smile emerged and then two four legged reindeer pulling the sleigh, above them as if instead of a moon, she began to draw two small characters. They rested on air.  Isabelle spent a lot of time with the details.

“Who are these two?” Mother asked her.

“One is my grandmother and the other is my brother Brian. They are in Heaven.” She said it with such longing. She shared the facts in the way only a child can. She said it with the hope and trust of a child who will one day grapple with the knowledge in a different way. Isabelle and I had talked about the tree she and her mother had put up for Christmas and the reason we celebrate Christmas. She had talked to me about God, her understanding of who He is.

It will be a journey for Isabelle. She has a lot to learn about this world and the importance of understanding it beyond what science (and her math) will tell her. I pray that she sees the beauty of science and continues to love numbers but will never lose sight of that part of her that longs to see past this concrete world to the place above and beyond the time and space of this one. Because that is where joy resides. It’s where M’s son and mine wait for us. It is where Christ waits for us. She’s on the best road possible right now, she has a mother who longs to show her what it means to give. She already knows that love never ends. 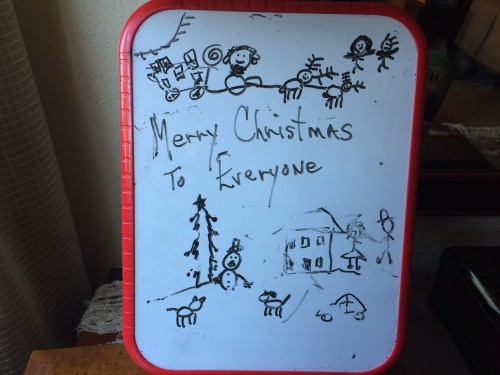 I wish for you the greatest gift, that of the love of Christ. And in turn, I pray that we each have the chance to share in the joy of giving this season.

The Birth of Jesus

Luke: 2 In those days Caesar Augustus issued a decree that a census should be taken of the entire Roman world.  (This was the first census that took place while Quirinius was governor of Syria.) 3 And everyone went to their own town to register.

4 So Joseph also went up from the town of Nazareth in Galilee to Judea, to Bethlehem the town of David, because he belonged to the house and line of David. 5 He went there to register with Mary, who was pledged to be married to him and was expecting a child. 6 While they were there, the time came for the baby to be born, 7 and she gave birth to her firstborn, a son. She wrapped him in cloths and placed him in a manger, because there was no guest room available for them.

8 And there were shepherds living out in the fields nearby, keeping watch over their flocks at night. 9 An angel of the Lord appeared to them, and the glory of the Lord shone around them, and they were terrified. 10 But the angel said to them, “Do not be afraid. I bring you good news that will cause great joy for all the people. 11 Today in the town of David a Savior has been born to you; he is the Messiah, the Lord. 12 This will be a sign to you: You will find a baby wrapped in cloths and lying in a manger.”

13 Suddenly a great company of the heavenly host appeared with the angel, praising God and saying,

14 “Glory to God in the highest heaven,
and on earth peace to those on whom his favor rests.”