We Stabbed The Engine – Multiple Times

Both of my army sons (veterans now) bought items off of the internet while they were deployed.

A soldier away from home, dreams about coming home and what he might do once he or she gets there.  (Or at least this is what my small sample of soldiers did. I don’t suspect I am far off though even with my limited sample.)

While my Josh was deployed, he bought a 1951 Willys Truck.

The seller said it ran, and to give him credit he did try, but despite the engine turning over, it never caught which never really mattered, because without brakes, it wasn’t road worthy. It would be Silent Bob and I (with the aid of Uncle Neil) who loaded it and trailer-ed it down to Josh’s house and then slid it dangerously off of the trailer into the garage of Josh’s home in Harker Heights. There it sat until Josh’s redeployment.

Josh remained excited about it even after seeing it upon his return.

It might help you to know a little bit about the vehicle to know why his excitement wasn’t predicated on the condition of the car that looked to his mother almost like a salvage yard contribution. And I am way more liberal on what one can fix or restore.

Picture it this way, its 1951,  the reality of world wars is in the review mirror  of the American conscious. Lot’s of veterans are home and the knowledge that the economy can tank has still left a taste in every person’s mouth who has made it through the Great Depression.

And the first SUV becomes available.

Designed and developed as the lightweight, four wheel drive of the US Army and it’s allies, Doug Stewart, writing for the  Smithsonian on just how important the invention of the vehicle might have been, said the following:

So what Josh had bought was the further evolution of that jeep which was already a powerful, rugged all terrain, lightweight truck, this particular one designed and built before his own mother was born. Because of it’s combat history, the vehicle was designed specifically to run for hundreds of hours without breaking down.

If you have ever owned or driven a Jeep, you understand. When the boys were young, we bought a 1994 red Jeep Cherokee second hand. I loved that car. I still love that car. It was the most fun car to drive I have ever owned. Not understanding a single reason how, something about the mechanics of the whole thing made it seem like you could feel the road through the steering wheel. It was a bit thrilling. I don’t know, sort of powerful in the way I was attracted to Sigourney Weaver when she demolished the alien mother monster from the Caterpillar P-5000 work loader.

Okay, not exactly. But close. And if a Jeep’s legacy insures that it’s as hardy as an engineer could make it, our Cherokee proved the point with three teenage boys.

Josh began taking the Willys apart the first year back from Iraq. He had the Willys F4-134 Hurricane engine rebuilt. He took off the brakes lines and ordered a driver side window.

Somehow over the next two years, he convinced me to move the Willys to the farm and then three weeks ago into the new barn.

Which is where the stabbing process went on this past weekend.

“Tell Josh I will come down this weekend if wants to stab that engine into the Willys,” my brother said.

Stab the engine, I thought.

I wondered if that was slang that Neil had come up with.

“Josh, Neil will help you stab the engine this weekend if you want to come up to the farm,” I relayed thirty minutes later.

During Josh’s agreement and excitement, I’m sitting their thinking the whole time that Josh didn’t question my words and that stabbing the engine fell out of my mouth as easy as if I had said I think I will go and make a pizza.

I realize that I am feeling all, well quite frankly, empowered in a new and unusual way.

I can explain it this way. When I was first starting to roller skate my grandmother made me a skating skirt. I loved it. I wanted to wear it. But I wondered if wearing a skating skirt wasn’t a bit like telling all the word you knew how to skate. More than that, you could dance skate, skate jump and backwards skate endlessly.

And from that lesson to this one…

there is a point where you embrace what you know as well as what you don’t  know and realize its wholly unnecessary and very freeing to ignore the difference between them when dealing with the world.  (This is one of the payoffs of spending time with  men.)

Basically, to stab an engine you must lower the engine in place, positioning it just so that the transmission, stabs into the housing of the motor in just such a way that the motion produced in the engine is translated to the transmission which in turn, turns the wheels.

You are mating the engine to the transmission

The ‘female’ engine to the ‘male’ transmission.

With a hoist that holds a ton of weight, literally, you position the motor. 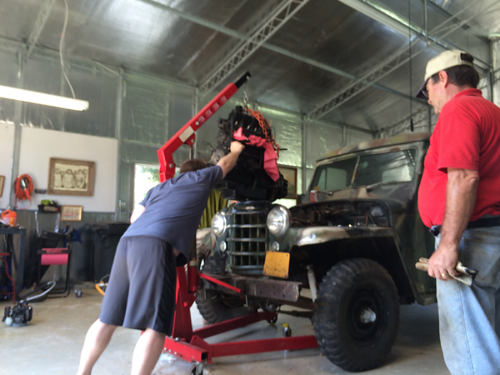 Then you lower it into the vehicle, everything has to be straight in three dimensions. 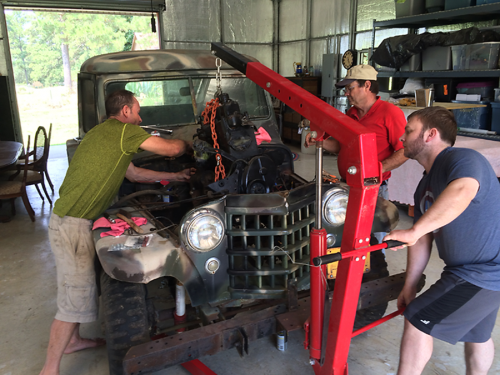 And then everyone tries to get the engine lined up with the transmission at the bottom. 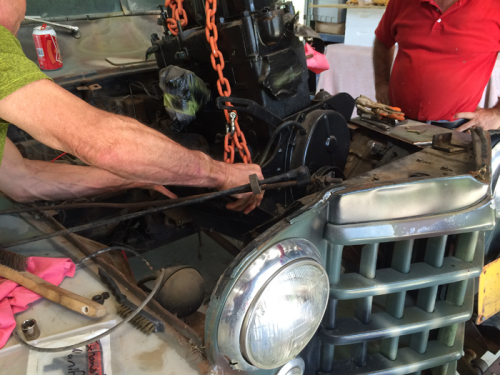 I was going to take a movie, but in retrospect, you wouldn’t have stayed with the movie as long as the process went on. It would have needed editing for interest in time.

Empowered and emboldened, I helped. 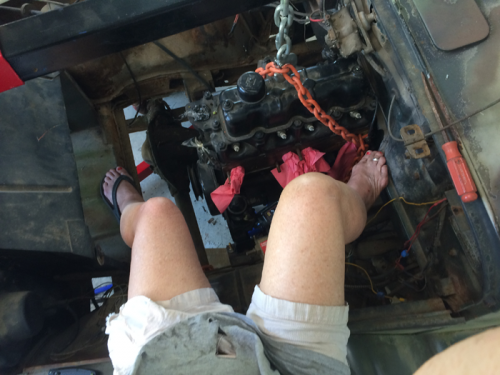 The issue was to get enough muscle to rock the motor as everyone tried to get everything in line to  mate the Hurricane with her transmission.

We tried it three times.

This is not trivial.

It was a clutch problem.

Josh has ordered one and there will be another go in a few weeks.

While we sat above and on the Willys carcass, devoid of the most important part, the engine, I offered advice on how best we might proceed the next time we tried.

“Let’s leave the good idea fairy outside,” Josh said sweetly, as he walked over and rubbed the already sore spot between my shoulder blades.

(In case you aren’t aware, this particular son is gifted with the most magical kind of tact and diplomacy of anyone I know. It’s in the way he says things.)

But the truth is empowerment only goes so far when you pretend it doesn’t matter what you know and don’t know.

Good advice for all genders, applicable in most but not all situations.

But just so you know. I did learn a lot that day. But mostly, its the sweetest memory etched on the walls of my heart.  It’s a long way that 51 Willys Truck has traveled, in miles and memories and in people.

PS If you never driven a Jeep, let me know. When the Willys is up and running you can give her a go.