The Bees in August

What are the honey bees doing at the farm, you might ask.

Well, I am very glad you did.

Because I have wondered myself.

It’s been a process to find out what beekeepers know and correlate that with what we’ve observed at the farm.

After spending a considerable amount of time trying to find information on nectar flow in the Gulf Coast region, I may finally have my mind wrapped around exactly what a ‘nectar flow’ is.

Officially its when one or more major nectar sources are blooming and the weather is cooperating, allowing bees to collect the nectar. Of course, that matters a whole lot where you are on this continent!

Basically when one of the elite scout bees, I would be curious how these are picked, finds a bloom, she goes back to the hive, does her waggle dance in the dark of the hive to tell the others where it is. The rest of the workers follow her directions. They go into massive collecting mode.

But right now, it’s hot summer, very  hot on the Texas Gulf coast, too hot for anything of much value to produce a bloom for the bees to collect on. So what is the hive humming along doing?

It turns out that for a variety of reasons, the bees will collect water. August is the month for water collection, especially in Houston when we’ve had triple digit temperatures.

I bet you guessed why.

In August the worker bees change jobs and set about air conditioning their hive.

First, the scout bees find a source of water. Then they tell the colony and bees head to the water source and start filling their crops (the same place they would put the nectar during a flow).

Once their crops are full of water, they head back and the in-hive workers accept the water through the process of trophallaxis—the direct transfer from one bee to another. If the in-hive bees accept the water quickly, the flying water tanks go back for more. If the in-hive bees are slow fewer go back to get more because the need has lessened. Bees might store nectar and they might hoard pollen, but they never store water. Once in the hive the in-hive bees spread it out as a thin film over the sealed brood  or on the rims of cells containing larvae and eggs. Then other in-hive workers fan vigorously, setting a current up in the hive that evaporates the water and cools the place down. Just like the process in human-designed air conditioners.

How cool is that?

So all month we have watched as the foraging bees have targeted the shallow dog watering bowl at the back door of the farmhouse. 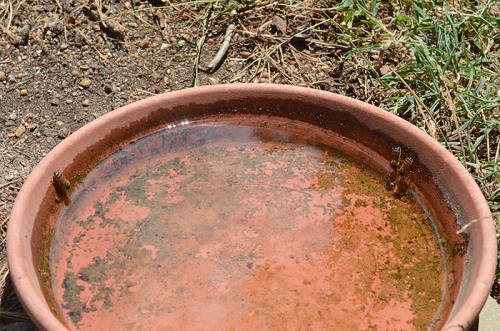 Of the three watering bowls that are back there, they only go to this particular one and they have been going at it hard. According to honeybeesuite.com, bees seem to prefer water that has some growth in it rather than perfectly clean water and they go onto report that some scientists speculate that the reason is simply that the bees can smell it and recognize it as a water source. 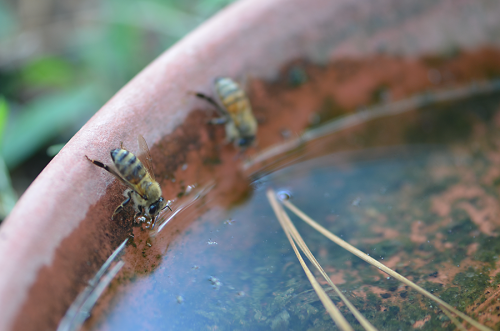 I don’t know. I am not a bee scientist, but I will tell you this. I am a microbiologist and when I looked at these pics I noticed something. Do you?

You should. You count on it. It’s what makes our planet the unique blue dot in space that it is.

I love bees and I love photosynthesis, and I even love a hot August day that shows in all it’s ways the majesty of nature.