Currently, because I do very little in the way of artistic expression in any other media, cooking serves my soul and aesthetic sensibilities.

One of the things I cook really well is biscuits.

They are light and fluffy, so moist you’d think they might fall apart, but don’t because they are held together with crispy bottoms and lightly browned tops.

One of the best things you can put on a biscuit is homemade pear preserves. It’s the combination. There’s nothing quite like it. When its made right, it drips off the sides of the biscuit like fresh honey but with grainy, peary bits that float on that pear honey film and add texture to your bite. (Yes, I know some of you hate that grainy part and you call it sandy and you’d never eat the stuff. Put something else on your biscuits or don’t read any further.)

There is a real art to pear preserves. First you have to have the right pears. ‘Cooking pears’ are something you’d never have the option to buy in a grocery store, you’ve got to have someone bring them from some old, gnarly tree off in some pasture or on an old homestead. (I’m going to tell you a bit more about this in a minute). The next thing is that their is a fine line between pear preserves and pear rock candy. If you don’t slice the pears thin enough and stop cooking them the minute they are almost translucent but not completely, you will have a mixture of sugar and pear that you won’t be able to chip out of the jar.  My Mother is the one who can make the preserves. I have watched her, peeling and coring and chopping the knobbiest, hardest pears, that Dad would bring from some tree he’d found in a field somewhere.

And I have been trying to recreate her art ever since.

About six years ago my brother found a pear tree up near Fort Worth loaded with pears and brought me bushels. I mean bushels. And he and I made the second best pear preserves I have ever eaten, largely with his intuition and help.

When we bought the old farm, two old pear trees stood as sentinels at the walkway to it’s washroom. Over the last 7 years we have watched them struggle through four years of drought, lose limbs in the wind and every spring, float white blossoms down to the ground. Every year there has been a crop of some sort. And we have never gotten a single pear from either tree. Each year, when the pears are about the size of a mandarin orange, something comes in a harvests every single one in less than a weeks time.

This year has been different. I am not sure if the larger predators who feed on whatever was taking the pears has done the pear scavengers in or what, but every week I have gone back and found the pears a bit bigger than the week before and only a few partially eaten and left on the ground as evidence that at least something has tried to take advantage of the pear largess.

This week we harvested. Well, my John did. 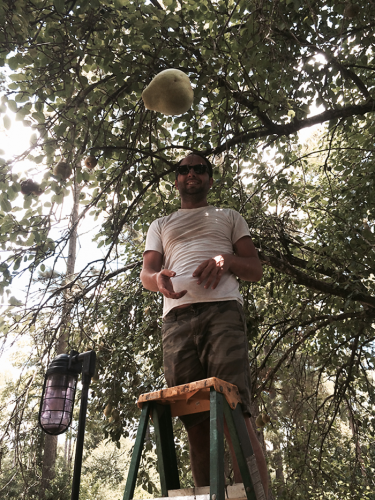 They are quite pretty and big and round for cooking pears.

I have a lot of them and I was wondering exactly what should I do with them (besides making some wonderful preserves, if I can.)

The problem has always been how dang hard the things are. They are a bit like biting into bumpy rocks.

So I finally did some research and now understand just how lovely, versatile and hardy are ‘Kieffer Pears’ and why their hard, bumpy flesh is to our advantage.

Kieffer pears they are, a natural cross from the 1870’s  between an Asian sand pear and a European Bartlett on the property of Peter Kieffer’s fruit nursery outside of Philadelphia. This cross made a unique pear, one that had a crisp texture like an apple and could be used in canning.

The thing about them is they will never ripen on the tree.

Which I had observed.

You harvest them when they are 2/3 to 3/4 full size. (That’s one of those things that a bit hard to measure, isn’t it?) And then  you put them in a root cellar.

That is why you are bound to find one of those gnarly, ugly pear trees (which they are not attractive trees) on fallow farmland or an old homestead. They were trees whose fruit would ripen nicely in a 60 degree cellar and last for sweet eating until well after Christmas.

So I am going to let my pears ripen in the frig in the new barn at the farm. 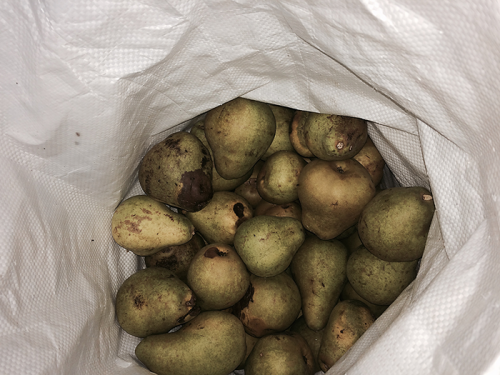 And then I am going to do all manner of things with them.

There is pear bread, pear pie, pear jelly, pear preservers… well, you get the idea.

Come out to the farm this fall and unless you are one of those “pears-taste-sandy” folks, I’ll make you some biscuits.

Heck, if you are one of those sandy pear folks, you can have my grape jelly on your biscuits.