I love being the mother of three boys. That’s not to say that if God had seen fit to give me girls that I wouldn’t have enjoyed them just as much, but given my fate, I just gotta say, I love my sons.

I love being with them.

As adults, they pretend they don’t like being with me, but I know they do.  The reason I know this is they take a lot of liberties with trying to convince me they don’t, mostly through unmerciful teasing. This is a clear sign. Having been surrounded by testosterone for a number of decades, I know what they are doing.

Teasing is the purest form of affection from men.

We women can ask God when we get to Heaven why He made them that way, but until then you have to take that teasing for what it is.

(It still remains that this can be  confusing to us women. I remember one time during a hot summer 20 plus years ago, my eldest son Jake wanted to impress a rather persnickety 12 year old girl with whom he swam on the swim team. Somehow he thought burying her towel in the playground sand box would accomplish his purpose. I don’t know who was more dumbfounded, me at his thought process or him at the outcome.)

Now as adults, I their mother, return affection to them in ways that are wholly different from when they were little when love was measured in McDonald’s happy meals. (A subset of my sons never remember I did this. Geez. I spent hours at what turns out to be the nastiest-of-all-playareas ball pit for no reason.)

As adults with their own lives, friends, and schedules, it’s a matter of taking time when it’s available. So it was  I found myself at my Josh’s house this past week because at least once every two weeks and sometimes three times a month, I go visit him, a hour away if traffic is good.

Sometimes Mother goes with me and sometimes not.

This time she did and Mother said what I was thinking, once we walked into the cool, quiet, and darkened house.

“I don’t think we can help him with cleaning. His house is pretty well picked up,” she said, scanning the rooms with a practiced eye.

This idea of project collaboration with adult children is long standing in my family. Every time Silent Bob and I would return to my childhood home for a visit, Dad had some project lined up. It smacked of free labor. Until, upon the few times he came to our new home in far East Texas, he did the same. And then of course it goes without saying, if you’ve read anything I’ve ever written about my momma (don’t tell her I didn’t call her Mother), she’s been doing projects around here for as long as she’s been in Houston.

If you calculate, it’s these times and projects and moments that come with more opportunity, if we let them,  as childhood lasts only a short time and we are adults potentially for much longer.

I called Josh at work.

“Sounds, great Jan. If you iron, use the distilled water in the frig for the steam.”

“He wants me to iron.” I told Mother.

“Oh no,” she said, the words and her face sagging with concern.

In the world of tasks and machinery, each of us have our talents and our ideas for which tools suit. In the world of ironing talent, apparently I suck. And Mother, the gifted laundress, favors cheap irons. When it comes to machinery, Josh gets the best for the job, which I am hoping will moderate the potential outcome of my sucky ironing.

“Maybe I can do better with a high quality iron,” I told her, wondering once again why I was so bad at ironing.

“It’s not the equipment, Jan,” and then she mumbled something that sort of sounded like “Josh may  have to wash them to undo what you are going to do to his shirts.”

That made me mad.

It reminded me of the time, when dating Silent Bob I told him I could give him a haircut and save him money and I found out later that he had walked off of the airplane straight into the airport barber shop, my lingering kiss of goodbye still on his lips.

It only took that once. I am proud to say that I have been cutting my  men’s hair for most of their lives, literally, often with better results than when they paid good money. Yes, I am that determined. So it does confound me a bit why I have so much trouble with ironing.

Josh walked in the door and after dinner, I said,

The smile on Josh’s face led one to believe that he was ignorant of my lack of prowess.

“Josh, have you ever seen your mother’s ironing?” Mother whispered to Josh, which in deaf person’s terms, is slightly louder than normal conversational tones.

A small shadow of concern flicked across Josh’s face. And then it was like he decided, “Nah, surely Jan can iron.”

The iron all steamy and gleaming with dials and buttons, I started.

A long, long time ago Mother gave me the detailed instructions.

Do the yoke, then the collar, smooth each shoulder over the narrow part of the ironing board. Then do the body of the shirt. Sleeves are last.

Josh had edged closer and I was only half way through the first shoulder.

“Aren’t you going to iron the crease in the collar?” His look said he was worried about more than that.

“What do you mean?!?” I said, in the most defensive tone I could muster, while trying to get between him and his shirt that now had a magnificent number of ironed in pleats where they shouldn’t be.

“If you don’t iron that collar down, it’s going to be just kind of flopping around everywhere.”

I was fast trying to calculate if Mother had ever including instructions for how to iron a shirt collar in half while considering how Josh had used his hands, a very particular manner that reminded me very much of his brother in heaven.

“You don’t have to iron collars in half!” I said, with emphasis to prove that I had at least the protocol right if not the execution. Reassurance was written all over my face that Mother had never given no such instructions.

Josh has forever been my diplomat.

“But it has no home,” he said, his hands making those movements again. “It’s a lost collar. It’s just going to wander aimlessly about my neck if you don’t iron it and give it the proper place to lay.

I wondered where in the world did he learn to iron. I mentioned this.

“Jan,  you do remember I was in the Army, right? And ROTC in college.”

Flashes of my youngest and a bit of my oldest readying their uniforms with the myriadm inscrutable details required for certain uniforms and BDU’s involving which ones should and which ones didn’t have to conform, all written up in literally books of instructions, flitted across my memory.

Josh stood near me as I hung the finished the shirt, warm and moist and uncrisp from my ministrations. 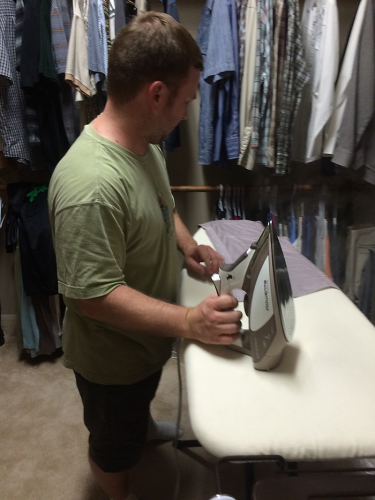 As I watched, Josh didn’t seem to follow the Doris rules of ironing etiquette. He glided the iron effortlessly across the cloth of the shirt, picking it up in random sections. His actions were delicate but definite as the cloth became crisp and finely pressed.

“It’s all about the seams,” he said, looking up at me, as if he’d heard what I was thinking.

“See you need to go all the way to the bottom, so that when  you tuck it in, its all smooth and controllable,” he said, as he finished up the shirt.

He had the decency not to compare the two shirts as they hung side by side.

I thought about it all the way home.

“What in the world are you thinking about?” John said, when I walked in the door. “You are frowning.”

I dragged the ironing board out and filled up the iron, one John had bought. Like his brother, fine equipment is sensible strategy to his  way of thinking.

Mother came around the corner and dragged a chair to the side of the ironing board.

“She’s doing the sleeves first. They are going to get wrinkled,” John whispered conspiratorially to Grandmother. She smiled knowingly. (Actually he wrote this on the pad as he said it which is the way we keep her in the conversation given her deafness.) 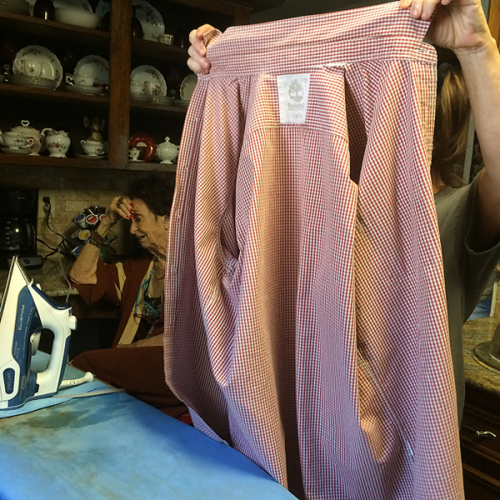 John didn’t say anything more, but laughing as hard as his grandmother, he took the iron from my hands. 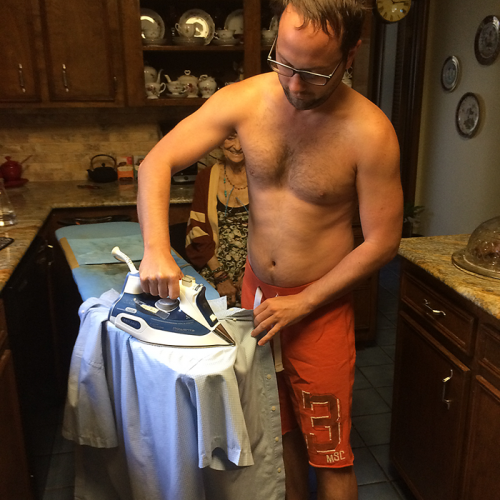 “From Grandmother of course,” as John’s hand glided the iron across the shirt and wrinkles disappeared.

“I think you tackle the shirt like you are out in the field pulling up weeds,” John observed. “And you iron too fast. Let the iron do the work for you.”

“Maybe you need to use those cast irons they put in the fire to heat up. Wow, you suck at this,” as I took the shirt from him. I quickly introduced wrinkles where there had been none. The portion of shirt I had tackled looked like someone had left it in the dryer way long after it was dry.

“How can you be so bad at this?” John asked, as he sent the video of me sucking at ironing to Josh.

And do I know that I am going to hear about this endlessly. Because they love me meanly because they are men. Yes, why yes they will.

A mother never gets tired of taking the memories whenever and wherever they come. And while I can’t iron, I do know how to cherish.