Water Walkers and their Shadows Explained

Last week I asked you to look at this picture and observe the very interesting science phenomenon!

That means a LOT of  you love science as much as I do.

So here’s what you looked at. 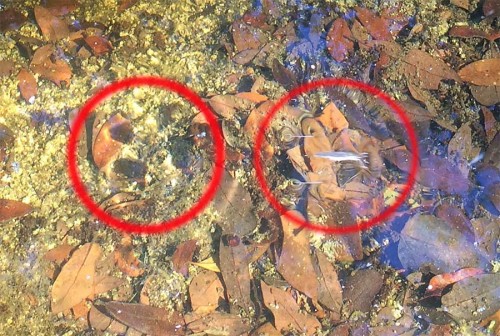 In the circle on the right is a true bug, a member of the family Gerridae. They are affectionately known as magic bugs, pond skaters, water striders, and Jesus bugs. As ‘true’ bugs, they have a mouth that pierces and sucks but these bugs distinguish themselves from other true bugs because they can run across water. They do this through a combination of factors that are a wonder of their long, slender hydrophobic (water hating) legs and the properties of water. First, let’s talk about their highly adapted legs that allow them to distribute their weight. Besides being long and slender, they are very flexible which allows them to flow with the movement of water. They also have hydrofuge hairs that line their body preventing it from getting wet, which could make their body weigh more and pull them down into the water.

The other part of this really cool ability is the water itself. Water is made up of molecules; two hydrogen atoms and one oxygen atom, organized by chemical bonds in such a way that one side of the molecule is positive and the  other side is negative. Like a whole bunch of little magnets, they line up on top of the water in such a way that they literally make a ‘film’. The science name is surface tension (water tension).

Water is fluid and yet you can stick your hand in it without feeling this tension, but you are big and water striders are very small and they use this film-like layer and its tension to their advantage.

They skate across it as if it was solid like ice.

The second picture shows you something really cool. As tiny as those little legs are as they touch the water, they BEND that film like layer! Like your foot on a trampoline puts a temporary dent into the fabric of the trampoline mat, the water strider ‘dents’ the fabric of the polar water he is striding across. When the sun hits the surface of the water of that dent, it scatters crazy-like and creates a circle of shadow much bigger than the tiny little leg where it touches the water!

See? (this diagram on the simple beauty of physics and accompanying optics, go here.)

So.. go look at a pond on a sunny day because water striders are almost everywhere, and look for their shadow, and think about just how amazing and charming and incredible even something as small as a true bug who can walk on water and make use of the molecular magnetic quality of water!