The Year of the Phage

Let me begin where I began.

About ten years ago, I was trying to understand something called horizontal gene transfer.

Don’t let those words scare you.

If you are a human and reading this, you have likely participated in vertical gene transfer (this is what happens when you have sex and a baby results. You have transferred your genes ‘down’ the lineage that constitutes your family.)

Horizontal gene transfer would be like you standing in the subway and as your knee touches the dog on the leash sitting quietly next to you, genes start flowing between you and the dog.  (That is a somewhat lame illustration and not completely accurate, but I think it suffices to give you the idea.)

The genes are flowing around in an environment that isn’t contingent upon producing progeny or having sex (as you know it) to distribute the genes.

You probably don’t know of any organisms that do this horizontal gene transfer thing.

Well, for your information, bacteria do. Those hundreds of thousands of critters in your throat making those nasty patches of white that the doctor calls strep. While they are excreting toxins, they are also actively switching and sharing genes from their neighbors, the other bacteria that are in your throat. (You have lots of them, mostly good ones, thank God.) This is happening in every environment on earth that has bacteria. Which is all of them by the way. Bacteria are everywhere. The newest estimates state that (at least from ocean sediment counts) there are 10 million trillion microbes for every human on the planet.

Now, after all this setup and information, you should be asking the following question: how are they switching the genes horizontally?!

Good on ya for asking because that’s where phage come in.

One of the main ways that bacteria horizontally transfer genes is through phage. The full name is bacteriaphage. Basically they are biological entities that infect bacteria.

Heck, they are way more than that.

According to one of the coolest scientists I have ever had the pleasure to meet, listen to, and work with, Dr. Forest Rohwer  says it like this:

“Much of biology is about feeding the phages. By killing nonillions of Bacteria, they have major effects on global energy and nutrient cycles. Phages are the friend of the underdog. When a bacterial strain prospers and threatens to take over the local community, their phages feast and decimate that strain, thereby successfully maintaining microbial diversity in the face of a winner-take-all
threat. This behavior can be a nuisance. When we populate a million dollar lysine fermenter with our bacterial workers of choice, one phage invader can multiply and crash the worker population in a couple of hours. But the phages
must be forgiven for such pranks as so many of the major breakthroughs in biology over the past century emerged from the study of phage. Trace most any aspect of molecular biology back to its roots, and there you’ll find a phage. Phages were there early on to provide experimental proof that nucleic acid, not protein, was the genetic material and to assist in the recognition of the triplet genetic code. Later they were used to uncover mechanisms of gene regulation, protein binding to DNA, protein folding, assembly of macromolecular structures, and genetic recombination. They have demonstrated evolution by flagrant horizontal gene transfer and provided proof that mutations arise independent of—not as a response to—the pressure of natural selection.” 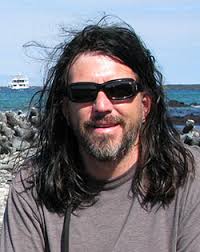 (this is a picture of Forest)

If you didn’t get all of that, that’s okay. Basically, phages infect bacteria , hijack their DNA one way or another, and then make billions of copies of themselves. And then do it again. In the process, among a lot of other important tasks, they carry around the bits of DNA that their host harbored. Voila! Horizontal gene transfer!

But here’s the thing. If the number of bacteria around is 10 million trillion to one human, the number of phage is … are you ready?

There is a incredible, constant, revolutionizing phage war going on around you, in you, and about you 24/7. It’s incredible, this invisible world.

Forest, the really cool scientist I mentioned, has designated 2015 the Year of the Phage. In fact, The New Yorker thought Forest’ ideas were so interesting they did a piece on it. Forest’s hoping that all you young people out there who want to be scientists will consider becoming phage explorers. For you teachers, grandmothers, and old people who like to think and know, Forest and his collaborators have made a field guide.

The field guide is like going on a treasure hunt and finding the jewel box.

For the field guide and a host of other amazing things to spend your time on, go here