Goodbye to All That

Not too long after my Jake went to Heaven, someone asked me if I had found out anything about him that surprised me.

Confidently I said this and I can’t say I spent much time at all in wondering what this person might be thinking about (they happen to love Jake very much) and even as suspicious as I tend to be, I didn’t consider that they might know something I didn’t.

I do recall thinking very vaguely that it was a somewhat strange question. The first reason I thought this was that I don’t believe people change very much. Oh, yeah, you moderate some  and we can alter our behavior, and I am not saying we can’t change, but to change your personality or the natural responses you might indulge in given your individual psyche is a really difficult thing to do.

My observations tell me it doesn’t happen very often.

So Jake leaving this Earth at the age of 27 like he did, surely meant there had been enough time away from us as family that he could have become someone different than the Jake that had grown up in our household. But I doubted that.

The second reason was based on the first: we had always been an openly conversant family and when you combine that with sons who did not have rebellious natures, knowledge problems tended to run the other direction, into the too much information category.  Additionally, I was never a person who felt compelled to know the ins and outs of my children’s adult minds, figuring that they likely felt the same way I did and weren’t really all that interested in knowing the crooks and crannies of mine. My answer to Jake’s friend’s question rested with the knowledge that each of us in the family had pretty much the jist of the morays and ideals that our individually evolved characters held and expected that general compliance to them would be the rule.

So how surprised was I when my middle and youngest son, almost 10 years now since Jake went to Heaven, told me this Christmas that Jake smoked.

This Jake, the son who upon finding out that his littlest brother had kyped cigarette butts from underneath the window of our young, blonde rebellious neighbor at the tender age of 5, sat on his chest till his brother cried. (Jake’s best on-the-fly object lesson on smoking and lung capacity.)

This Jake, the one who from the earliest age, loved physical challenges and bought all manor of crap to build muscle mass and whatever else.

“Jake smoked cigarettes,” I sputtered, while I watched middle and youngest son look to their dad Silent Bob as if I was the one who had lost their mind or maybe confirmation that they indeed had just betrayed some code of manly conduct.

“How could you have not known?” one of them said.

“Yeah, he’d quit every time he’d get a mouth sore thinking he’d gotten mouth cancer,” said the other. That sounded like Jake, I thought, while I scrambled for a place to fit this new knowledge onto the image and memory of my oldest son.

“Jacob smoked cigarettes?” I said again, rolling the words around in my mouth, their shape and meaning tasting foreign still. I pictured Jake in Iraq and in the Corp dorms at A&M. I thought of him in the house around the corner from ours and at elk camp and in the big truck he bought right before he died. I tried to recall  if I had ever noted the lingering smell of tobacco or found ashes or butts somewhere they shouldn’t have been and chose to ignore it.

Through all the times I washed his clothes, visited him, rode with him, or packed his stuff when he left, temporarily and then for good, not a hint could I recall.

Not sure why this all comes to mind today. For the first time in a couple of weeks, I gave over to thinking about my Jake for more than a few moments.

Perhaps it’s this cloudy and raining Tuesday making me a bit melancholy and like my Mother says more often with each passing day, “I sure do miss Jake.” I pictured my Jake, not so much holding a cig but more imagining the panic he’d probably felt with a canker sore. The man had an overactive guilty conscious and was more than a little OCD.

Watching the news this evening, the channel touted an interview with a ‘sign spinner’ who occupies the same corner in the middle of Houston proper. The video footage showed the man, likely in his mid 20s expertly tossing, spinning, and juggling a heavy cardboard sign about 3 foot by 5 foot. In between shots of his expertise he talked about his job. An odd job, yes, but his reasons and dedication were as solid as any creative, gifted, driven executive.  One couldn’t but help appreciate the subtle psychology the young man enjoyed as he athletically moved about his corner of Houston. His interview answers were honest, he liked the smiles his efforts elicited and he apparently spent considerable effort honing his talent.

My John, watching with me, chuckled.

“Jake would have applied for that job, wouldn’t he?” John said, his brother clearly in his thoughts this night as well.

We laughed as we considered his job application and appropriate experience. Jake was creative and generous when applying relevant experience from his past for jobs he wanted.

But both of us knew our Jake so well, we knew that their would have been a kindred spirit in him for the sign spinner in Houston.

A small prayer, that communication of the faithful that moves beyond space and time to the place where Christ and Jake wait, settles into my heart. There was comfort in knowing what I know about my first born and sharing it with his brother. I am grateful for the comfort of a world that is at once real and here and yet boundless because spirit and sentience share the space and inhabit the hereafter.

That, and I am almost 100 per cent certain Heaven doesn’t grow tobacco. 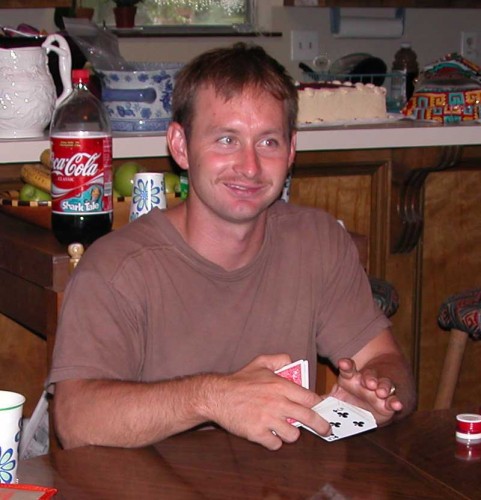 *The Title of this post refers to a book my father gave me titled “Goodbye To All That” a comical, historical look at the use of tobacco. I doubt the book is even in print any longer.