By the way, how did my brain look? 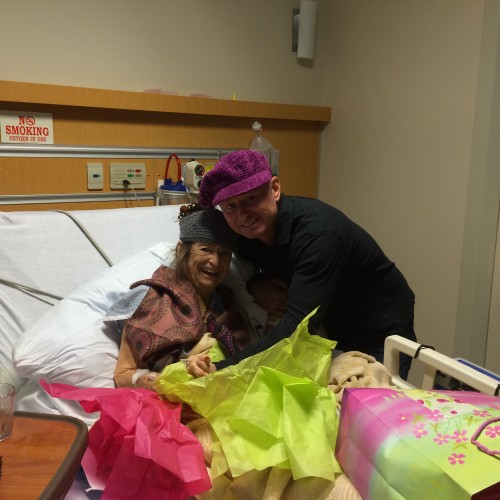 The whole time I was in England, I wondered about my mother.

You know my mother.

That woman who at 82 years out works me at the farm, asks probing faith questions, and takes care of each of those she holds in her heart with constant prayer.

When I was away this time, which she hates very much and is not bashful to tell me, she was not her communicative self. I only received an occasional one line email. Not like her at all. The status quo is for her to send me a full report on everyone and everything they are doing, or not doing.

So when I got home on Monday, I expected her to be waiting for me, like she always is.

I found her in her apartment trying to get into her bed, her hair disheveled, still in her gown although it was late afternoon. Neither her right arm or her right leg were doing what her brain was striving to make them do.

By seven o’clock in the evening, she had been seen in the emergency room, the cat scan revealing a subdural brain bleed, flown by helicopter to where the best neurosurgeon in these parts works, and was in the operating room having two dime sized holes drilled into her skull.

Forty five minutes later the pressure relieved, the doctor told us it was ‘old blood’ and that this solved 95% of the cases. We would talk about rebah down the road.

It was Monday night, laying in bed that I began to piece things together.

As we age, our brain shrinks and in doing so, the fine vessels between skull and brain have less structure to support them and hence more prone to damage. A small leak can occur from just sneezing. But I knew what has caused this. About 6 weeks ago, Mother busy going about her daily chores had tripped over something on the floor and fell, chest down. It had certainly scared her, but that seemed to be about all, she hadn’t hit her head or sustained any visible injury. But my guess is when she fell, her head had a whip like motion, and as that brain of hers rocked a little more than it should have, a tiny leak began.

For the next five weeks blood accumulated above the left hemisphere of her brain until it began to move her brain from its position. It pushed it sideways and down. For about three weeks she had complained of not feeling well, sleeping more, but I put them down to being 82. She still worked more than most people I know with thirty years less on them.

But there came a point when the pressure was enough that the delicate signaling between left brain and right limbs no longer conveyed the signals properly.

Tuesday morning Mother moved her right leg and waved at me with her right hand.

We go home today, her head half shorn. I imagine we will begin looking for wigs tomorrow. however, she may have found a new look given that a dear friend provided here with a quite blingy headband she hasn’t removed since she got it.I doubt that rehab will have much to do.

When Mother met Peter (what doctor introduces himself by his first name) in the middle of all this, we had explained to her what happened. She remembered remarkably the helicopter ride. She’d told that she knew something was wrong and  that she waited till I got home to help her. I have no idea how she managed. I can speculate having known her as I do, it was through sheer will. The will that makes her who she is. The soul that makes her who she is. Which all resides in that gray matter in her sweet head that is so often bowed in prayer to her maker. It’s the spirit of the woman that goes beyond the chemicals in her brain.

Peter asked her if she had any questions. We wrote this on paper so she could know what he asked, her ears mostly deaf in the last few years.

“Actually, quite good,” he answered.

What a Thanksgiving we had. My prayer is that yours was blessed as well.