A Couple of Biology Lessons Out At The Farm

Three months ago, I had 9 chooks. (I like that name for chickens. Sally Sweetapple taught it to me.)

A week ago I had only one.

Every time I would go to the farm and head out to the chook coup, one or more dead, breasted out chickens lay somewhere within their pen.

Granted they were old girls, and only a few of them were laying. Still.

I miss my chooks. I have had chickens at the farm, their blue and brown eggs always tasty and available, for the last seven years.

The carnage all started, mostly likely with a revisit from some of our neighbors to the east. Rusty is a horse whisperer. Not sure what you think the demeanor of that kind of professional might be, but I am pretty sure if you sat in the barn swing and just listened to him as he directs his young son and teenage daughter, it wouldn’t take long for him to dispel whatever notions you might have. Rusty’s a mean, bible toting, angry, ginger haired middle aged man that makes you feel sorry he has a family to torment. His daughter has taken her frustration (or maybe her hope to curry a mean father’s favor, Rusty had complained vehemently that our chooks were making his horse think out of the wrong side of their brain) by stealing eggs which meant she would cut through the chicken wire on the pen and sneak in.She visited this minor criminal mischief on our chicken coup in months past, forcing us to put up security cameras and for me to have a talk with her.

She’d been behaving for several months now. With the first chicken gone, a giant hole in the part of then pen similar to what she had cut before, right near the shared fence with downed boards and a path into their yard, I figured she was up to it again.

Unfortunately, when she might have been trying to find a way to please an unpleasable father, she provided ready egress to some animal that was developing a very keen appetite for chook and had found the opportunity.

We patched. To be honest, where I was mad at the girl with her previous indiscretions and I hated for any chicken demise, I felt sorry for her this time. It was right before school started, she had yet to be “home schooled” by her stay at home father (her poor, younger brother’s fate), I wondered at what she was suffering and feeling and worrying about. How confusing for someone to be preached the beautiful message of Christ out of a tainted, constantly angry, horse whispering mouth.

Silent Bob put up a game camera right in the corner where it looked like the animal or animals were getting in and set a have-a-heart trap.

By the time I was down to two chooks, I wasn’t too much into the heart part as much as I was to trap whatever was killing them.

They literally were breasted out, the stink each time I went to check and give food and water to the chooks that were left, wafting all through the beautiful trumpet vine that grows wild and shades the coup.

We made guesses as to what was getting in. The hole they squeezed through wasn’t 5 inches across. And they were clever at dismantling our zip ties and added wire.

When there was one chook left, I grabbed her, she sqwawking like an old woman, and put her in the have-a-heart trap. I’d  made arrangements for her to spend the rest of her natural life in a friend’s coup.

The game camera had showed what was happening.

I never knew that racoons ate chicken. A google search details how effective they are in destroying a coup in no time and that they could be butchers for their ability to breast them out.

The coup door wide open with no clucking coming from it, Mother and I were sitting at the picnic table, watching the wind blow through the giant pines. The lone chook rested in the the have-a-heart trap in the back of my truck, all of us getting ready to go back into the city. I like to think the one remaining chook knew she wasn’t destined for raccoon consumption and that she would not roost alone that night. Both of us were absorbed in our thoughts. The love bugs were covering everything, their butts attached by twos in crazy union all around us. Mother broke the silence. 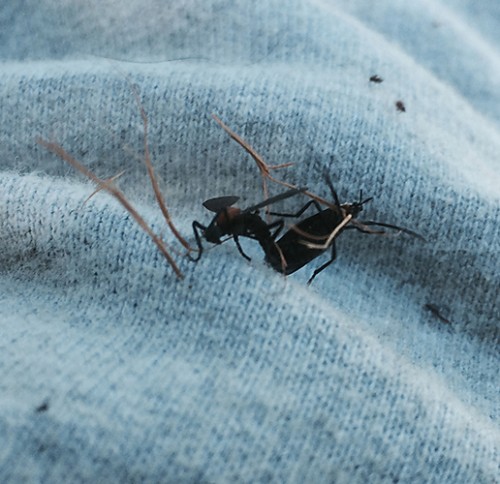 “I have a question, Jan,” Mother said as she moved one of the co-joined love bugs decorating her slim leg.

“Are these bugs actually mating or are they just companions?”

That’s the beauty of the human spirit and imagination. It’s limitless in the possibilities it can consider. Perhaps that is so with young girl neighbors to the east who are troubled. I pray so.

“Mother,” I said laughing, “of course they are mating. I doubt they have a level of sentience that allows for an appreciation of companionship.”

“You could be wrong, you know.” she answered.

I love my mother.