When I was four my sister died. Her little body, thin, her lungs structured with malformed sodium channels, she succumbed and went to heaven at three. (She had inherited cystic fibrosis.)

I remember very distinctly her last days, seeing her in her coffin, and in much more vague terms, I recall a bit of the aftermath of her death.

Part of that aftermath was the deposition of her earthly goods. You know, the things she had accumulated in the short three years she resided on this planet. I do not know how much stuff she had or what my Mother chose to keep of hers, but years later, when a teenager and rummaging around in the attic, I came across the box that had what was left of her possessions.

I don’t recall much of the actual contents. The image in my head is that most of the items had grown dusty and like all things of this earth, decay had set in. I think there might have been a little toy lamb, dingy, its curly coat stiff with age. There was the package of M&M’s I had gotten for her a couple of nights before she died. (The neighborhood grocery store was just past the gate of our back yard and I was familiar with lone trips there, even small as I was. I guess I knew then that she liked M&Ms. It might have been that I liked them.)

The point to all this has to do with something I saw on Pinterest today. 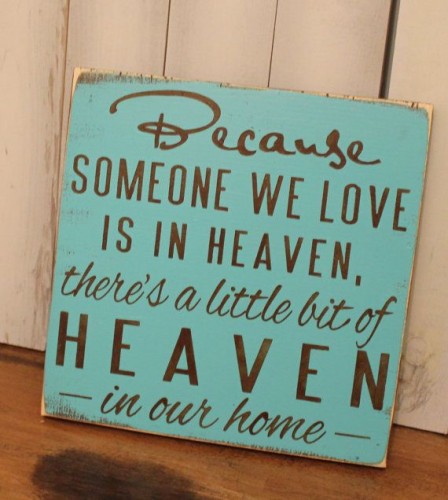 I liked the statement. Like everyone else, I long to find a way to soften the reality of this life. But being of the personality that trends to depression (which obviously means I can obsess on the strangest things) I couldn’t help asking myself, do I really believe that?

Well, as it turns out, yeah.

No matter how short or long a life is here on earth, our actions, our being, influences others around us.

The whole of our life, short or long, is built by the individual actions we take, often in response to others who in turn are acting and influencing and it’s in the collective that we become who we are.

Connecting all of that to heaven is the interesting part.

Whether intentional or unintentional, that slogan is rooted in Christian theology.

If you’ve ever recited the Lord’s prayer there is a curious phrase in it. “Thy kingdom come, thy will be done, on earth as  it is in Heaven”.

Coming from a very, and I mean very strict conservative Christian, evangelistic bend, all I’d ever worried about was not living in hell for eternity. I remember the day about 25 years ago, I sat in a Lutheran pastor’s study, meeting with a very small number of searching young mothers and he explained that God’s kingdom is here and now, not just in the future.

Perhaps C.S. Lewis says it plainly. (He’s speaking hear about being ‘virtuous’ but you will see how it all applies.)

“(1) We might think that, provided you did the right thing, it did not matter how or why you did it-whether you did it willingly or unwillingly, sulkily or cheerfully, through fear of public opinion or for its own sake. But the truth is that right actions done for the wrong reason do not help to build the internal quality or character called a “virtue,” and it is this quality or character that really matters. (If the bad tennis player hits very hard, not because he sees that a very hard stroke is required, but because he has lost his temper, his stroke might possibly, by luck, help him to win that particular game; but it will not be helping him to become a reliable player.)

(2) We might think that God wanted simply obedience to a set of rules: whereas He really wants people of a particular sort.

(3) We might think that the “virtues” were necessary only for this present life-that in the other world we could stop being just because there is nothing to quarrel about and stop being brave because there is no danger. Now it is quite true that there will probably be no occasion for just or courageous acts in the next world, but there will be every occasion for being the sort of people that we can become only as the result of doing such acts here. The point is not that God will refuse you admission to His eternal world if you have not got certain qualities of character: the point is that if people have not got at least the beginnings of those qualities inside them, then no possible external conditions could make a “Heaven” for them-that is, could make them happy with the deep, strong, unshakable kind of happiness God intends for us.”

I LOVE THIS, especially that last part, and not just because Lewis used one my absolutely favorite hobbies (TENNIS) as his mode of demonstration.

It says something that not only do I believe, I know to be true.

The kind of person you are in this life affects the quality of life we have here, God’s will/kingdom/desire for this world, if you will. Not the act, but the intent of your heart, over the long term.

To know that someone whom you have loved, made a bit of that kingdom here better, and is now in Heaven.. heck, I am not going to try to say it better than Lewis and whoever wrote this slogan originally did.

For reasons that have nothing to do with the meditations here, my Mother and I happened to have need to look through the possessions of my father, gone to Heaven now over 35 years. 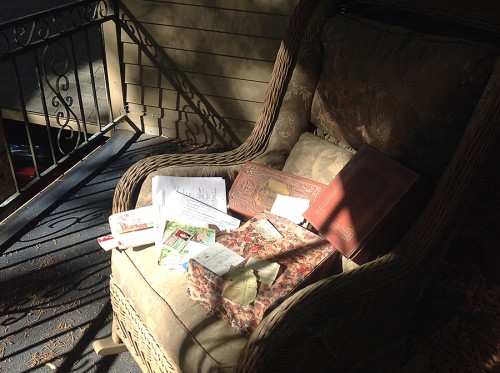 Not much really left of who he was, if you judged solely by what’s in that chair.

Ahh, but the man he was, who judged by the eyes of those who only saw the sin of a man who in his young life drank too much, was the man who taught me a great deal bout God’s kingdom here on earth and the one he now enjoys in heaven.

And so it is with several who I love who wait there now.

The whole plan is a bit exhilarating. Just imagine, of all the things you cannot count on about this life, you can count on building a heart within you that spreads joy to those you touch and lasts forever.