Every year at this time, every denomination that holds to Christmas tradition, has a play of some sort, a concert at least, centered around the reenactment of an event that happened 2000 years ago.

To illustrate the occasion (which in essence details the sacrifice of an innocent man who claimed to be God’s son), stories are usually told of loss and greed and disappointment ending happily with reconciliation, hearts full of gratitude, and love abounding.

The idea is to connect you to the reality of Christ.

The underpinning is grace. (In case that word confuses, it means ‘being favored for no reason’. In other words this is not about fairness, this is just about forever love without reason).

I don’t know how much difference the stories make in the long run. Perhaps they prove hope, even in the light of reality. Life, untidy and unpredictable, is just beyond the exit door of the song filled, Christmas lighted auditorium or church. Hope springs eternal though, you know. Given that the Hallmark channel is still producing such stories, increasingly sappy ones, we are a people who wish for goodness, in all its forms, to reign over the bad things.

That was clearly what God had in mind with Jesus.

Reflections of Jesus’ sacrifice, or His love, or the hope for Heaven is what makes us tune into stories that give us the proof of the power of love, even if we don’t want to admit where the whole idea comes from.

On December 15th, in the Lifestyle section of the Houston Chronicle, Claudia Feldman ran an article about an elephant who has been the star of Christmas pageants in local Houston churches for 30 years. Paige as she is called, has strutted her stuff, along with some camels with less personality, across many a Christmas decorated stages bearing Kings with incense and myrrh to the newest infant of the particular church she was visiting. Her entrance, kneeling, and deposition of her rider always elicits a wave of clapping from adoring attendees. Her owner, Bill, was interviewed in the article and while it was interesting, it was the last few paragraphs that are the part that you need to know about this Christmas season.

Bill talked about Howard. He even went so far as to dedicate his words to Howard.

Who is Howard, you might ask and why should I care.

Well, Howard was remarkable as a friend and a family man but he certainly wasn’t famous. He was a veterinarian by trade, a wonderful one and an Aggie, but neither of those things put him in history books that I know of. And most extraordinarily, he hasn’t resided on this planet for almost five years to the day the newspaper article came out. But Howard was one of the kindest men I have ever known. And there wasn’t a soul who knew him or benefited from his kindness that didn’t also know he was that way because he believed Jesus died for his sins.

I’ve told you stories about he and his family, but outside of that, as far as I know, the evidence of Howard resides only in the memories of those he loved and those who loved him back.

Until the article, almost exactly five years since Howard went to Heaven.

In the article Bill explained that he had attended years of Catholic parochial school and had spent almost an equal amount of years at the church Howard attended, tending to Page and the other animals that paraded across the stage, every December. Howard as the local vet in the church choir, had helped Bill with the animals year after year. Remembering one year in particular, Swain recounted that one of his camels had an upset stomach and he and Howard were the cleanup crew.

“Anybody else would have said, ‘Take your camel and your elephant and get the hell out of here,’ but Howard helped me scrub the walls. We bonded over that,” Bill told the reporter.

You might call it a miracle, your might call it coincidence, or you might call it nothing, but this is the truest love story, one about true kindness and goodness. Despite the lack of a happy ending in terms of how we account if you think that Howard died an untimely death and a difficult one, the story, the true story is rife with hope. It’s about a man, who from a very simple action, one born of the grace he knew first hand from his Savior, gave to another. He gave something that mattered. Five years later.

I hope and pray, should I ever be put in a position, especially as gross as a camel that has diarrhea, that I too will show God’s abounding love and grace, by aiding one I owe no debt to do so. Touching another’s heart because Christ touched yours, well, there is nothing more valuable. 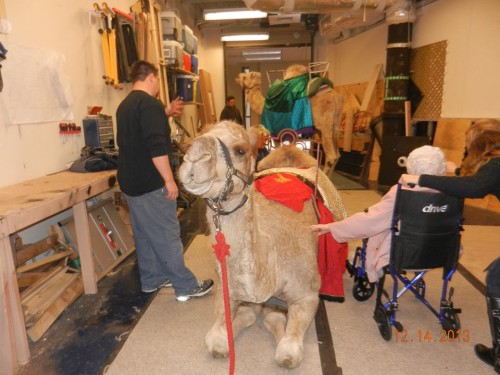