Bless the Photogs and Those That Curate Their Efforts

On the wall next to the fireplace on either side, are two deep cabinets. Because our house is old and these cabinets face the outside wall where the siding is disintegrating in the Houston heat and humidity, there is a dampness to them.

I happened to be rummaging about the other day, and for no good reason, opened the right hand cabinet. The air wafting out was musty, a small taint of old concentrated in it’s closed up space.

Kneeling down, I peered in and thought to myself, “How appropriate”. Housed in that cabinet are the images that record the beginnings of my married life and motherhood, which seems in some ways, a dusty thousand years ago. I haven’t looked in there for years.

There are a thousand pictures, some massed in boxes, some in albums whose pages no longer sit neatly along their spines. They tell the story, depending upon the photographers view, of what my life was like.

In my case, most of them tell the story of who came into my life and who made it rich, and the evolution of a family with three baby boys and of marriages and friends. They record changes, divorces, and those gone to Heaven and some I hope did.

I sat, crossed my legs in front of me and pulled and tugged and opened plastic bins until all around me were scattered photos.  I poured over them. And each of them, every single one, took me back to the moment it was taken.

There is a beauty and expectation in the innocence of a new mother. I had forgotten about that. I almost would go back, if God said I could. And yet, that would mean losing the wisdom that motherhood has taught me.

That was that time and this is this time and there is a time and place for everything and while we might not think so, change is good.

But so are photos. They are good. They are very good

In two days it will be thirty years ago that I looked like this:

That was my worried but I am happy face. It was a Sunday morning and in less than 6 hours, I would be holding my third born son.

My first born would worry that he would have a heart big enough to love another brother as much as he did the one he already had.

As it turns out, he would.

And the second one would teach him things,  barely two years older. 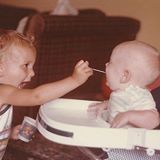 This picture is when I almost killed Josh.

Well not really, I guess. But it  took way longer than it should have, to figure out that he had a food allergy to the tiny little peanut butter and strawberry jelly sandwiches I was feeding him every day at lunch.

I treated him with powder. I thought it was heat rash until his hair started falling out. He looks like he had a cross between terrifically awful cradle cap and mange.

Despite my best intentions and as we watched, Josh got older and with every morning he was a new person.

But no matter who he thought he was each day, we knew who we were as a family.

They all have nails in their mouths.

And Johnathan is sitting on a level.

Okay, we mostly knew who we were.

While I was rummaging around in that cabinet, I came across another, newer album.

It had this picture.

Thank you Betty, my mother in law, the mother of my husband. For saving and giving me and mine this. I know how you feel when you look at your children, your family, when you think of your time as a new mother. I have some idea of what you think of as your time now, as you are still their mother, and God bless you and use you in lives of your grandchildren and great grandchildren.

Like I said, God bless the photographers and those that curate their efforts.

And to my Josh, Happy 30th Birthday. A mother couldn’t love you more or be more proud of you.