Love and The Pine Bluff Arsenal

There had to be several times we passed the entrance to the Pine Bluff Arsenal. I figure my brother was with my dad and I but I don’t remember him so much as I do my dad. We had to be going hunting or maybe fishing in some bar pond off the Arkansas River.

“You remember what that is?”

The marker said “Pine Bluff Arsenal” but other than that, the road stretched both directions with a forest wall of tall, thick pine trees paralleling one side. The most telling attribute of how vast an area the arsenal occupied, despite any obvious structure that looked military, was the absence of rundown shanties and yards full of junk that dotted every other road in Arkansas. Their absence extended for miles.

“They are making bombs that can carry chemicals.” he’d say to remind me.

“What kind of chemicals?,” I asked again, trying to conjure chemicals rather than bullets driving warfare. Children don’t generally entertain imaginations that run in these directions. Well maybe today’s video game children do.

“In case Russia attacks us.”

I looked into the ominous woods.

“The arsenal borders the river. An accident could affect the river,” he finished.

That was what he said the last time I remembered him talking about the arsenal and then he’d fallen silent. That day as the old truck heater warmed the cab,  I hoped that he didn’t know what he was talking about.  But deep down I knew he did.

He’d also told me about the missile silos that dotted the Arkansas landscape.

“Why do we have a biological warfare arsenal in Pine Bluff?” I asked him. Why would Russia care anything about the sloughs and flooded fields of rice or the thousands of acres of cotton we grew? I might not have been able to articulate the confusion in as concrete of terms back then, but the status of our rural state even to my small mind seemed incredulous for such needs as arsenals and nuclear silos that had bearing on a world possibly at war.

I never knew quite what to do with the information. It worried me because I knew it worried him. Dads keep bad things from happening. They are strong and sacrificial, I counted my Dad especially so, but even strong dads don’t have control over accidents or Russians.  He was purposefully poking a hole into the fabric of childhood innocence, one he thought necessary.

I hadn’t thought much about the arsenal until last week.

Last Friday night, Harold and his wife Mary came to the farm. I already knew Mary, an accomplished writer who has written over 60 books. She has a keen interest in telling history for children’s sake. She also plays the organ. So does Harold. It turns out that’s how they met. That and the fact they were both in the same place at the same time, which would be Pine Bluff in the early 50s.

Perhaps about the year or two before I was born, Harold, a rank private but very intelligent and with an education of some sort that the Army valued, was stationed in Pine Bluff at the arsenal.

“It was a very unusual place to serve because there was no mess hall or barracks.” Harold said. As he and I sat around the farm camp fire I could tell that the memory of meeting Mary was one he turned over in his mind many times before. “The soldiers had a motel room we lived in and ate in town or with families. One night for entertainment we went to church.”

“Yeah?” I said, encouraging him. His mind rolling back across the decades he and Mary had been together, to the little town in Arkansas, he described her.

“I saw the most beautiful girl, that one that is sitting over there,” he said pointing to Mary, “she was sitting at the organ playing. She was beautiful but you know what won me over?”

When Walter smiles, the energy of it is reflected in his eyes and his body shifts a bit, his excitement animating everything about him. It spills over to whoever sees it.

“I thought the register she chose was perfect. It would have been my choice,” he said triumphantly. In the world of organs, registration is the technique of choosing and combining the stops of a pipe organ in order to produce a particular sound. The likelihood that Harold, an accomplished organist himself and a private stationed in Pine Bluff would meet another organist whose choice of register was simpatico can’t be very high.

Basically, he found her mind as beautiful as he did her tall, statuesque figure. The appreciation clearly contributed to the longevity of their marriage as well as the pleasure of anyone who sits around them and shares the oneness of their relationship.

“He and one other private were the only ones who could fit into the only two decontamination suits the Army had supplied and who could trouble shoot the equipment,” Mary said.

“There were two sections to the Arsenal, Janet,” Walter explained. “One was where magnesium and thermite incendiary munitions were made and stored. The other was where I worked.”

Sitting before me, a half century later outside of Houston, was a man who knew what my father could only guess at, who had been part of an arsenal our government and my state initiated should the cold war ever warm.  I asked him if he could tell me what they made in his section of the arsenal.

He didn’t even shake his head no.

“We were ready. We had the delivery systems and we had enough stockpile to implement whatever we were told to do.”

We talked a bit more. Walter never told me what they made.

“You know Seratia macerans?” he said, once he realized I had some microbiology training and we were walking towards the barn to get something cold to drink.

“We used that to understand how the biological agents would distribute. It had similar properties to what we were working with. We spread it for miles, experimenting.”

He knew what to say and what he shouldn’t say. Nothing he said divulged any more than I could glean from Wikipedia about the arsenal in Pine Bluff.

After they left, I settled around the last embers of the old oak tree that had probably been a seedling when he and Mary met. The drought from two years ago had felled the old water oak. I thought about how different life is now then it was when I was riding with a father who wanted to teach his daughter what he could about the world.

Getting old provides the privilege of perspective.

Some things change, but some don’t. It’s good to perceive what matters in the long term and here’s what I know.

It’s honorable to comply with your promises, no matter how much time passes. A promise is a promise.

Integrity is valuable, to those that have it and those that surround them.

Love is powerful and the need to protect those we love as a nation or parent  or a mate may transcend our own good sometime but it is one of the most potent and constant drives of humanity.

You can never learn too much from past mistakes.

Come back to the farm anytime, Harold and Mary. You inspire me.

Serratia is a bacteria found in dirt, infections of the urinary tract, dirty teeth, and your shower, where it likes to eat the phosphorus residue of your soap and shampoo. It is abundant naturally in the environment and once it finds a place it loves to grow, it is tenacious. Common household bleach totally kills it and is a way better weapon of choice than the hopeful monster experiment you’ll perform if you attempt antibacterials.  You can ‘see’ Seratia because in the moist place in which it thrives, the millions of lightly pink cells that makeup it’s colony produce a pinkish red hue. It was discovered in a bowl of polenta in 1819, implicated in medievil miracles in the 1200’s, and the army used it as a simulant as field test substitute for weaponized tularemia bacterium in the 50’s and 60’s. On September 26 and 27, 1950, the U.S. Navy conducted a secret experiment named Operation Sea-Spray in which Serratia was released by bursting balloons over urban areas of San Francisco. One person died from an unusual urinary infection attributed to the release.

The Pine Bluff Arsenal‘s biological operations were conducted from 1953 to 1969, when President Nixon banned biological weapons due to the public outcry over Agent Orange. At least seven different biological agents were produced at the facility. All biological agents were destroyed between 1971 and 1973. The chemical weapons stockpile consisted of declared quantities of rockets, land mines and ton containers. They were safely eliminated in November 2010. In 2003, the Pine Bluff Ton Container Decontamination Facility  decontaminated and recycled more than 4,300 empty ton containers stored at the arsenal, resulting in the recycling of more than 6,500,000 pounds of steel. Pine Bluff Explosive Destruction System began operations in June 2006 to destroy more than 1,200 recovered chemical warfare munitions – the largest inventory of recovered chemical warfare material in the nation. The inventory included 4.2-inch mortars as well as German Traktor rockets, which were captured during World War II. 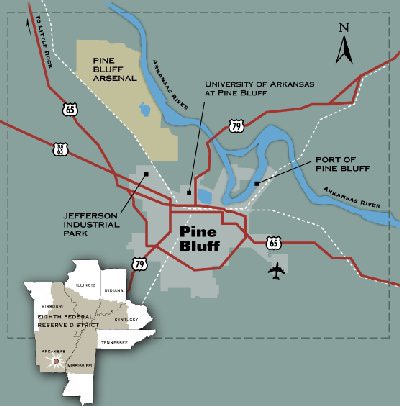