An Early and Mostly Unexpected But True Thanksgiving

I love the winter holidays.

Even the hot Gulf Coast winters can’t deter my expectations for the season and all the celebrations it contains.

I like the pretending of childhood Halloween nights and the comfort of remembrance aided by marigolds and sugar skulls on the Day of the Dead.

I anticipate Thanksgiving and Christmas based on my childhood rearing, partly informed by the books I read and the movies I have watched. I only slightly alter my ideal of thankful families around tables laden with food and houses trimmed in merry lights as snow falls gently with each new season. My hope for the true spirit of the season, centered upon heartfelt thanks and the certainty of saving grace has never wavered.

However, the reality is, the ideal doesn’t always happen.

Some holidays just don’t work out.

Despite the preparation, a fair amount of forethought, and uncommon charity to get in the spirit, you aren’t guaranteed that the climax of Thanksgiving dinner or Christmas morning will be the joyous occasion you had hoped. And it’s never as funny or repaired as harmoniously as shows and movies depict.

I am fairly certain I experienced an early, unplanned Thanksgiving. I suppose it probably depends upon what you want to define as a Thanksgiving.

Despite me trying to pack way too many activities into last Friday, the one I was really looking forward  had every possibility of turning into a disaster.

I had invited a group of people, who although I have no formal business type connection to them as they have among each other, they have adopted me into their group. They staff a private, local library that focuses on theological matters. The beautiful building houses over 80,000 volumes that range in content from information on Egyptian pharaohs to American Indian spiritual practices. Scholars of all denominations study or research in the library and many of them, some who do not have the same theological beliefs as mine,  have become friends. Valuable ones.

I had invited them to dinner at the farm, along with the current Jewish professor visitor and his artist wife. And it was 3pm and Silent Bob, Mother, and I had not even started progress north towards the farm.

And there was a brisket to cook.

And preparations that we hoped would allow them to enjoy the little piece of land we caretake. And it was a certainlty that the peace I hoped to prosper wasn’t part of my hurry and do attitude as we packed food, dogs, and people in the truck.

Once there, we all worked together and I wondered at how the potluck would go.

As the sun sat, headlights of one car after another announced they’d found our place.

We ate in the barn.

Some brought appetizers and we munched while some went to find the cows.

Others dishes stayed warm and then accompanied the brisket.

The flies that had been part of our life all summer, never showed up. 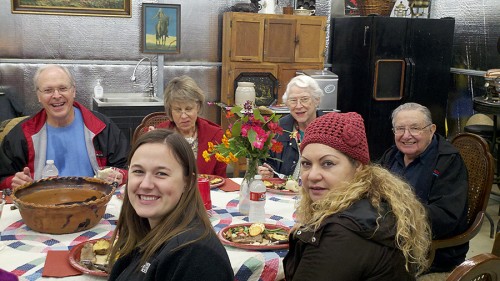 We sat around the table, lingering over conversations, laughter echoing against the metal barn, our elbows bumping, we were so close. There was no hurry, some returned to the buffet table as it’s contents dwindled. As I looked at individual faces, it hit me.

We were a family of sorts.

If one considers there are all kinds of harvests, if Thanksgiving is the giving of thanks for the blessing of the harvest and of the preceding year, well that’s pretty much what we were doing.

The bonfire warmed the cool night as we sat around and ate the desserts that seemed just right for the tastes of eighteen. I was tickeled at the joy of marshmallow roasting.

I would like to say this dinner of thanksgiving was about my hostessing abilities.

It’s possible that a part of it was the deliciousness of Silent Bob’s brisket.

But I think it was mostly because there are harvests of thinking that bring people together. They don’t all have to agree, but they all have to care that they are looking for the truth. There is in intimacy to that, a comfortableness that causes you to find joy in companionship.

It’s that way at this library.

All eighteen of us are grateful for it, this past year, and what the future holds for it and us.

I  hope you have a wonderful Thanksgiving and blessed season as you prepare and hope. I pray that you share it with as many people as you can, those you can call family, whether you share biological family ties or not.

Thanks, Jen for the photos!!