You Have Me at Maps

I love them more the older I get.

It’s possible that’s because maps give perspective and wisdom comes from perspective that I have a hankering for them. We are are supposed to get more wise as we get older.

And I am definitely getting older.

Or maybe I just like them for the story they can tell.

For instance looks at this one: What do you call the night before Halloween? 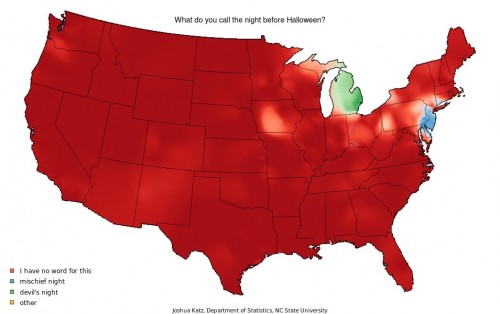 I didn’t know anyone in the US had a name for the night before Halloween but apparently something is going on New Jersey, New York and Michigan on that night. Who knew.

(A stat student at North Carolina, Joshua Katz, came up with this as well as a whole series of maps that display regional dialect variation in the United States. Among Joshua’s maps you can also find a lot of other really interesting visual depictions at VisSys that have nothing to do with whether you say coke or soda.)

How about this one? See this map (from MapMuse)? The little blue squares are cell phone towers, gateway to the internet. The red circle is where the farm is.

This is the reason we can’t get internet out at the farm. Or cell service. We are in a zone of isolation. Between distance and geography, the cell surrounding towers are not within reach for signal. Apparently none of the communication providers feel that’s its reasonable to put up cell towers when the ratio of cows to humans exceeds 30 to 1. Either that or they don’t want our neighbor to the East, who is a tool of the first order, to find out how to be more of a terrorist then he already is. (Currently he specializes in terrorizing his family and immediate neighbors.)

I LOVE this one!

Bet you thought there would be a route in the United States, didn’t you? We live in a big world.

Or this one, it’s a map of the 13,000 satellites we have orbiting our planet. 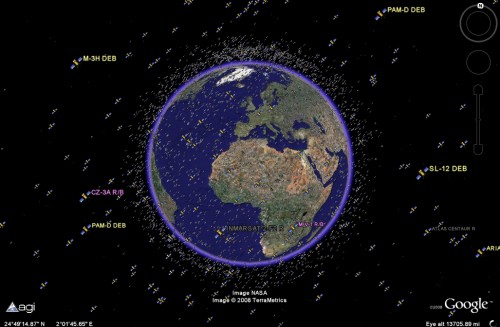 You can get that one from Google. There’s even a plugin so you can track your favorite.

Maybe these don’t make any difference in a big way.

But be honest, they aren’t your fifth grade teacher’s pull down, roller shade maps if you are looking backwards to forty or more.