We’ve got a neighbor.

Up at the farm.

It’s safe to say I can’t stand him.

As in, I pretty much hate him.

When I tell you about him, you’re going to say I have good reason.

There are a hundred stories about FlameIt (the nickname he’s earned) but I’ll just tell you this one.

I was working in my garden on Saturday, thinking about how wonderful it is this plan of God for things to grow and my part in getting to participate in the activity, when I heard FlameIt screaming at his son.

FlameIt couches everything he says in disdain, derisive, demeaning commands and comments. I’ve heard him talk to his wife, his daughter, this son, their dogs, and the horses he trains with the pent up anger he holds for himself spilling like poison all over everything he surveys. When he first moved into the leased property and we were talking, he told me he was a horse whisperer by trade. I doubt his vocabulary or his whispered conversation holds any less septic value than his screams.

The boy, not big for his age of about 8, often wears a pair of jeans and a cowboy hat. His eyes are blue, I’ve seen tears spilling from them, and while he is amazing on a horse, a lot of things scare him. There’s never any back talk from the boy. His shoulders rarely square in defiance. He’s chosen a more passive response. He just does what his father screams at him to do.

The boy has been following orders barked at him for all the hours I’ve been tilling my garden. Weekday observations have been the same because I have noted he doesn’t attend public school anymore. I am sure FlameIt has told the local elementary school he could educate his son better than they could.

I put an onion set in the ground and think about the sweet bite of the onion that will come to fruit in the winter. I think of the boy and his rearing.

It strikes me his education from his father, who is about all he has exposure to now, is destined for something that won’t be worth much when the boy comes to fruit. How could he survive the abuse, the failure to provide real knowledge, the anger of a man who is just plain mean and the use of a young, vibrant boy for your personal slave.

Stretching my back, I looked up for the moment and caught the boy running, quick like. I could tell he hoped his dad didn’t seem him stop and hide behind the big, blue well reservoir. FlameIt’s eyes might not have noted the boy’s place but his mean voice filtered through the trees and the wind. The boy turned and ran towards the trailer when he saw his dad occupied.

FlameIt, stomping with anger, progressed steadily towards the trailer, anger building in him, the look on his face almost pleasurable in a sick way. The boy tumbled out of the trailer back door, running to his dad, a glass of water spilling in one hand and the other hand, a clenched fist, small fingers wrapped around something.

“I brought you your medicine,” the boy explained.

“I didn’t ask you for that,” FlameIt replied, taking what the boy offered, commanding him to finish working.

So that’s the way it is, I thought to myself. I had heard rumors about FlameIt’s dependency for compounds to ease his back pain.

But not once had I considered that the boy realized a way to ease the burden of horrible father was to make use of that father’s dependency on the drugs that would render him half sentient and contained, semi comatose in the trailer.

As the boy went about his labor, I entertained myself with all the evil things one human could think or wish on another.

Bending to the ground, small things moving around in the mulch I was spreading, something in me reminds me, the truth, that my Father in Heaven loves FlameIt.

And, he loves the boy.

As I put a small cabbage seedling in the ground, I say a prayer, marginally for FlameIt, but one heartfelt for the boy. Perhaps the boy, against the odds, will not turn into his dad. Perhaps like the plants in my fall garden that will handle cold and frosty rain, and a cooler, swifter winter sun, the boy will be made of sterner stuff. Sterner stuff that despite the elements, or maybe because of them, he’ll go about charity and good will and a sweetness, born of Heavenly grace. Grace that is exhibited in Christ. 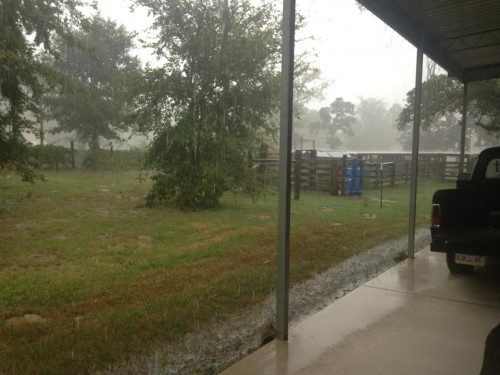 Into every life a little rain falls, sometimes a lot, the thing is to use the rain, to nourish fruit that makes a difference.