Daisy showed up, barely a kitten, at the farm, her tail shortened by someone, almost certainly not the results of her genetics.

She is for the most part loving.  She tolerates us very graciously and cares that we inhabit her territory. We say, awwwww, when she  rubs up against us, affectionately.

Okay, she probably isn’t really loving and may not even tolerate us in terms that we  humans understand.

Appparently the rubbing does not exhibit a single bit of affection in the action.

It’s that soft, silky fur, that seduces us, (filled as it is with all sorts of invisible bacteria and parasites, cat glands oozing and depositing signaling compounds as they  rub against our legs, all with a singular lack of malice).

We are sucked into affection by their mastery of indifference.

It’s rather clever how their actions make us feel superior, when what they are is killing machines. And terrorists.

That’s why I think it’s a good thing that bad people aren’t cats.

Case in point: Daisy this morning as she exhibited her latest kill trophy.

I probably shouldn’t say ‘kill’ because she made the rat suffer before its demise. On purpose. With extreme prejudice. Disguised in indifference.

Dexter shows up and only God knows why, she figures she’ll give it another go in teaching him her cat ways. (Which means she let the rat think it was escaping, only to dash it’s hope, time after time.)

This is Daisy saying, “Geez, is he dumb.”

This is Daisy saying, “he has no idea what he’s doing but he tries to do it very fast”.

Poodles don’t have this heart. It’s the cold, steely eyed stare from the heart of a killer who knows how to torture. 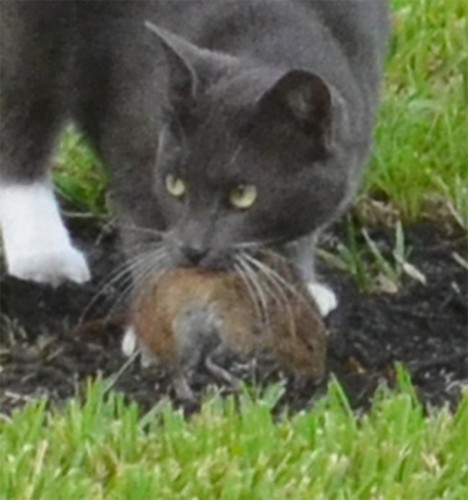 I think the mouse just gave up its will to live.

Then Daisy ate it.

If bad people were dogs, we might be better off.