As a lot of you know, yesterday was Jake’s birthday.

Jake’s my son in Heaven for those of you who don’t know. Which I can’t imagine there would be many since it figures big in the events that have shaped my life and you probably don’t read this unless you’ve helped me in some way when he died.

Whether for good or bad or whether a psychologist would say I should or shouldn’t, I celebrate Jake’s birthday in my heart as I would have if he’d never died.

And so I did yesterday because as strange as it may sound, I’m fairly certain I got a gift from Heaven on Jake’s birthday, yesterday, in 2013.

Jake left a lot of things for us to remember about him and although I think of him all the time, every day, something will inevitably come into my mind, painted on the walls of my heart, that I will  let my mother’s heart pour over on his birthday. I remember a great deal of his childhood but most often I think about the weeks he returned from Iraq until he left for Heaven.  That’s probably because those are the last days, the most recent.

Right after he got back, Jake took to watching the sunsets here in Houston, sitting in a garden swing that I had required he and his brothers make for their grandmother one mother’s day decades prior. He had told me the one beautiful thing about Iraq was the sunsets. He tended to the melancholy (wonder where that came from) and I can guess at his thoughts when he watched the desert sun set all those months away from home. A portion of those thoughts surely followed him back to Houston. Sometimes he sat in this evenings by himself, cigar smoke filtering the air above him, rocking gently in the swing. Sometimes his dad sat and smoked alongside. I joined them the day Jake came into the kitchen, having sat for a very short time and with that familiar smile on his face, requested for me to come and see the “Bat Show”.

For the next several nights, we would be captivated.

Just at dusk, they came to feed, from where I wasn’t certain. The swing faced north and a scant half city block, Cypress creek flowed and the land in between the swing and creek was prime bat feeding territory, if you like mosquitoes, which they do. They swooped in a circling flight path, very close to us, hundreds of them, dancing in the twilight, scooping the air with their webbed digits.

They came that summer and fall in the hundreds. Jake passed onto Heaven and I never saw them in numbers like that after or since.

It was mother that made me start thinking about the bats a week ago.

“Sometimes when I look out the window where Jake sat, it makes me sad,” she told me.

“I think he was sad. He looked sad. He sat there so many times my himself.”

And not for the first time, I consider how valuable memories are to us humans. They were to Jake as he sat in that swing. They are to his Grandmother, witness a week ago as she missed  him, her heart aching a bit for what might never have been. And for this mother who knows that at least part of that son’s memories were about how much he had learned to love his Father in heaven, I also knew as a soldier he had cemented the place faith had in his heart and life. Jake might have been sad, but I knew that the sadness was stitched whole by a certainty beyond this world.

For a fact I knew this. It is a memory I have of the day he told me. I remember everything about that day and him and what he said.

As certain as I was about Jake, the coming months would find me wondering if the bats had been a bad omen. Silly you say. Silly yes, but human, for in the hearts of each of us, whether we want there to be or not, is a hole that must be filled with faith in something. We can fill it with science, sometimes with superstition, but filled it must be, and as it turns out, it’s a process in which we experiment, until you find the faith that brings you peace.

So remembering the bats and running errands, the day before Jake’s birthday, I happened upon a friend of mine.
“I’ve been wanting to tell you about something,” she says, her pretty blonde hair framing a face of excitement.

“You know where Cypress creek runs under that bridge over by the golf course,” she says describing a place about 1/2  mile from our collective houses.

I’m picturing it as she talks.

“A bat colony lives there. I saw them come out the other night. They streamed out. It was so cool. Google has pages about them in downtown Houston on Waugh but nothing about these. For some reason I wanted to tell you. I thought of all my friends you might be the one who would share my enthusiasm.”

So August 11th, just about dusk, Jake’s brothers, his mother, and my friend and her daughters, nephew, and mother in law watched as the Mexican free tailed bats cycloned out from underneath the bridge, leaving their babies and dotted the sky in waves of dotted black clouds.

Standing on that bridge, I looked at my friend, a woman who believes as I do, that the hole in the human heart meant for faith is best filled with Christ. She never knew Jake, but born with an aptitude for mothering that is as inclusive to all children as I have ever known any mother to be, she hugged me close when I explained.

“See that channel in the creek there?” she motioned with her hand as we all gathered and cars honked at us,  the bat show over, all of us joyful in nature’s bounty and that she had made sure we were part of it. “They come out every night at the same time.” She paused for effect. “Same bat time, same bat channel,” she giggled. And then she smiled a mother’s radiant smile of comfort and peace at me, one now written in my memory.

Was it all coincidence? We could calculate the odds. Does superstition play a role? Bats are just bats doing what bats were created to do.

Do I think that my Father in Heaven, was thinking of me, his daughter on a day laced with memories, of the gift that was Jake and the promise to see him again,  of memories made and those to be made, to help me know Him better? And He would do so by using another daughter of His to show me?

I’m too peaceful to think otherwise. 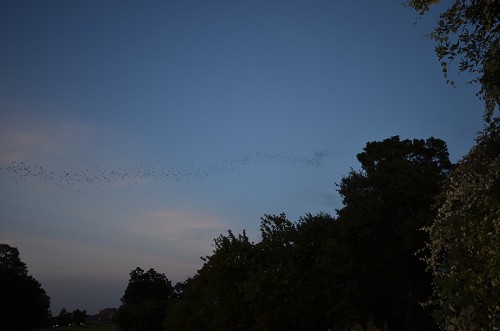