Let The Rocks Cry Out

It’s a group of us, all scientists, of different disciplines. (Some of us are biologists, some geologists, and some are either so well rounded  or confused on what they want to do they don’t fit in any category and we call them astrobiologists.)

We’ve come to the far western shores and somewhat inland country known as the Pilbara. It’s a sparsely populated place. There are sheep. There are railroaders.

Some of the most heavy duty rail tracks in the world link the mines in the Pilbara with the ports that carry iron ore from this red land to places that make steel.

It’s probably reasonable to consider that the car you drive has a little bit of the Pilbara in it, certainly if it’s Japanese.

This place is pretty rusty looking.

And it’s full of rocks. 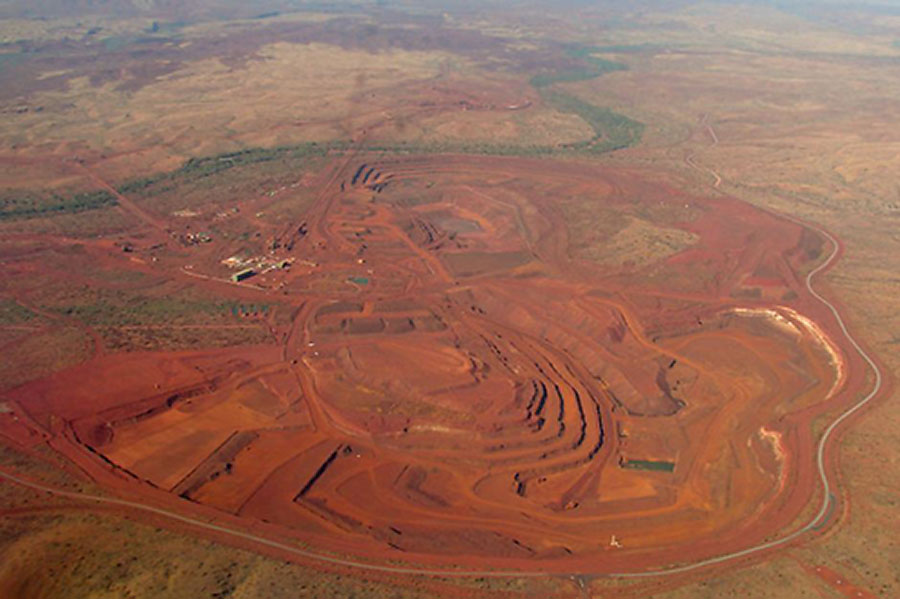 And that’s the point.

Because we are here to pick apart the layer upon layer of rock and see if it cries out with information, about what the weather was like a long time ago. Or if life cried out and lefts it mark here. Our goal is to compare it to what we know today about how life and our planet and our atomophere interact.

So why go into the red Pilbara to look, you might ask. Why not any rocks?

And that would be a good question.

You need to know a little plate tectonics. And then a little about isotopes.

Now don’t stop reading. This is as cool as anything, I mean anything you could imagine.

There are good ideas about how our blue planet managed to get hung in just the right place, not too far, not too close to the sun, so that for as long as we can tell, liquid water was available. These theories  include how the planet itself was formed, because even in that, the Earth is different than the other 8 or so that circle around our sun.

Our planet is like a newborn’s head. Sort of.

Rather than one solid shell surrounding whatever is going on in the interior (we have some very good ideas here too that help to understand why we have gravity), our planet’s crust is made up of ‘plates’. Like a huge, constantly changing jigsaw puzzle, these plates move. But they don’t just move in one direction. They dive down under or get lifted up against other plates. Their movements make the deepest trenches in the ocean and cause the highest mountains. They makes continents.

And as best as we can determine,  this has been part of our earth’s history for as long as it has been earth.

Because if you are going to push things up and push things down, interesting things happen to the  atoms and molecules that make up that crust and everything that rides on top of the plates. The things that go up start deteriorating. Rain hits them and little miniscule bits of rock come off the mountains. Rivers make canyons, and all those little miniscule bits go into the ocean. If a plate goes down, way down, far enough down, even the hardest rocks melt.

In other words, because of plate tectonics, everything that rocks can be made of, iron and gold and uranium and lead, any and all other elements, are constantly moving as the rocks they were a part of, move and change and melt.

As it turns out we live in a world of change, because its not just plate tectonics that’s on the move, but so are the elements.

Let me first confess and then explain.

Although I am getting better, I have a hard time envisioning the dynamics of plate tectonics despite the beauty that my eyes are witness to. It’s the time element that gets me. Sometimes plate tectonics cause immediate changes like volcanoes or earthquakes, but a lot of the time it’s movement that happens over what geologists call geologic time. These people don’t think in days or years. They’re talking millions of years, sometimes billions of years.

A billion years is as understandable to me as is a billion dollars.

What’s even harder for me to understand is the atoms that make up those rocks. Actually atoms (the smallest unit of an elements) make up everything, even you and me and while it’s elegant how it all seems to be working, I think it’s confusing because of two things, we can’t see an atom and we like boundaries.

I don’t have to explain about not being able to see atoms. You know that they use invisible atom rays to treat cancer. You’ve never seen a pair of oxygen atoms rust your bar b q pit, but they do as they flit about in the atmosphere, some of them delving into your lungs and catching rides on your hemoglobin to fuel your body.

While atoms move all around, the nature of them is very difficult to understand. Because as humans we like to think in discrete terms and I don’t think atoms are describable like that. If I asked you to define a cloud, lets say by drawing it, the second you started to outline its shape, it would have already changed and that shape would no longer describe it. The best you could do would be to give generalities.

Generalities is the way I think of atoms.

Maybe a bit like a hyperactive kid who has dined on poprocks for breakfast kind of generalities.

It’d be hard to predict or describe that kid’s actions in specifics. But you could generally say where he’s headed.

Atoms all have a core particle or particles that actually weighs something (protons and neutrons) that make up their ‘nucleus’. Cloud like, the other particle (electrons)  hyper-like fling themselves around the nucleus. Just like a magnet, these particles have a charge and they are in constant movement, full of energy.  The identity of an element is depednent upon how many of each of these things is in it’s atom. One less or one more, changes them into a different atom.

Some atoms have more energy than others. Some atoms, just by nature, are unstable. (Like some people). The thing about unstable atoms is that they ‘decay’ (like some people). They start flinging off bits of themselves. (This is VERY complicated. When and what bits of themselves atoms fling off is never predictable if you are talking about just one individual atom. But we can in general say something about the tendency of a large number of the same kind of atoms, and you can thank quantum theory for that.)

Now here’s the thing. These unstable atoms decay at different rates and once they fling off parts of themselves, they become a different atom.

The map for knowing which atom a decayed atom becomes is the Periodic chart of the elements.

HERE’S THE IMPORTANT BIT: All over the planet, there are atoms everywhere that are decaying into a different atom, some faster, some slower than others, giving off energy when they do so.

(This is why uranium is used to make bombs. It likes to decay and does so very energetically.)

Some of the atoms that make up rocks also decay. When a rock get spewed out of a volcano or heaved up from the ocean floor, the atoms in them and the atoms that have decayed get trapped as the rocks solidify.

Because we have a general idea of how fast or slow certain atoms decay (remember your quantum theory) we can compare how much of the original atom and how much of the decayed atom are in the solid rock and then estimate it’s age.

The slower the rate of decay for a particular atom, the better it is for ‘clocking’ the really old things.

And when the isotope geochemists got their hands on the Pilbara they found that some of the rocks were the oldest on the planet. They estimate them to be 3.4 billion years old. About the same amount of dollars that Steven Spilberg is worth.

There are other places where the rocks are really old. Canada and Africa have some. They are unique places, places where the plate tectonics have pushed the old rocks to the top and not recycled them.

It’s all quite incredible. And useful as it turns out. And clearly not so common in our immediate stellar neighborhood.

That means that our blue planet certainly is unique in our solar system and quite possibly, past that boundary.

Let’ the rocks cry out, I say.

Some of the Pharisees in the crowd said to Jesus, “Teacher, rebuke your disciples!”  “I tell you,” he replied, “if they keep quiet, the stones will cry out.” Luke 19 39-40