Google, Another Reason It’s Good To Be a Woman

We decided to paint the old farmhouse this past weekend.

It’s been about 6 years since we painted it Oak Hill brown from the more traditional white that it was. Six years is about half the life the paint can tells me the brown should’ve lasted.

I could spend some time complaining that the warranty should make last weekend’s task unnecessary, but the truth is years of cracked paint, softened ship lap, and 80 years of wear make our initial application likely not what advances in material science and latex paint warranty tests considered “normal”.

So Silent Bob, Mother and I decided to tackle the brown, SB scraping, Mother taking care of our food needs and cutting grass in between, and me manning the Paint Crew airless spray system.

Paint Crew airless spray systems are amazing. I guess any brand would be, it’s the airless spraying system that is awesome. The only problem is that despite their 100 dollar or so cost, each time we have had to use one, the one we had purchased in the previous job no longer worked. Despite the fact that the last time I bought one and used it I MADE CERTAIN I CLEANED IT GOOD.

I poured paint into the newest of the three sprayers we had, confident it would work, turned it on while Bob propped the ladder to the start point, and… nothing.

Paint jiggled in the pan, the spray gun was ready in my hand, the red hose spread out and vibrated, and nothing. I tried reading the instructions on the top of the little motor. I tried turning the priming switch to prime. Nothing.

I looked at the other two and Silent Bob reported that they did nothing too.

Maybe these things are one-use only machines, I thought.

I debated on how far we would get if we just started brush painting.

I didn’t think that thought long.

About the time I had convinced myself that we’d just have to go buy yet another one, looking at the three Paint Crew airless paint sprayers lined up, I rebelled. Surely even if it was a good marketing plan, no one would expect these things to work ONCE.

Surely they were made to last more than one time.

Now I am a female, a not very bashful one, one who has lots of education, and readily accepts there are a multitude of things I know nothing about. That has never prevented me from investigating them at the level I am comfortable with. Which means I don’t have to know everything about something to use it. Or fix it. Or take it apart. I consider female intuition one of my premier attributes.

I am comfortable experimenting based on incomplete knowledge and total ignorance of mechanical understanding. I have done this was marginal success in everything from cooking to bicycle repair. Okay that last one didn’t work out so well.  There was also that one time I tried to lubricate the swinging door at the farm and in doing so, managed to turn the swing mechanisms just the right number of degrees so that the door was always trying to fling itself open.

It’s a good thing I have also never been afraid of asking questions.

This is where Google comes in and this is where being a female who had no qualms in admitting ignorance  are a marriage made in heaven in the most fortuitous of ways.

I Googled “Paint Crew airless paint sprayer won’t prime” and up came a YouTube video of some nice man somewhere in cyberspace or Ohio explaining in a great amount of unnecessary detail on exactly how these things worked (which I couldn’t’ hear because I couldn’t figure out how to turn up the volume on my iPad). So I watched as he silently, at least from my end, in one 30 second revealing moment, took a permanent marker and pushed the little valve at the bottom of the paint reservoir. I wasn’t exactly sure why this made a difference, but I know when something is the way its supposed to be, and my intuition told me that over time this little up down thing could have gotten stuck either up or down and just needed a little nudge to go back to going up and down.

Permanent marker in hand, I poked in the paint reservoir of the three Paint Crews lined up and freed the little up/down thing in two of them.

It took us 5 hours to spray the old farm house. Bob took over for me when despite my best self convincing arguments that I could indeed stand on top of the roof and paint the highest parts of the house and couldn’t, he did and the old farm house looks beautiful.

On the last corner, me wobbling on the ladder and a little bit of paint dripping down the spray gun on to my arm (I wondered if there was a YouTube on exactly what I should tighten to prevent this), a gentle breeze drifted to me through the magnolia tree I was working under. On that breeze wafted the redolent lemon scent of magnolia blossoms.  Right at my right elbow, hidden among the large ever green leaves of the magnolia, was a just opened blossom. Creamy white, I sucked in it’s scent. I thought of my Grandmother Hershey, long gone to Heaven and a woman smarter than me who built houses. I watched as my Mother, never tiring, mowed grass amidst the private thoughts and prayers I know that keep her mind occupied.

Women, we are a hardy, unstoppable lot. I wished I’d coined “Steel Magnolia’s”. Its good to be a woman. For a lot of reasons, during the era of Google just adds one more. 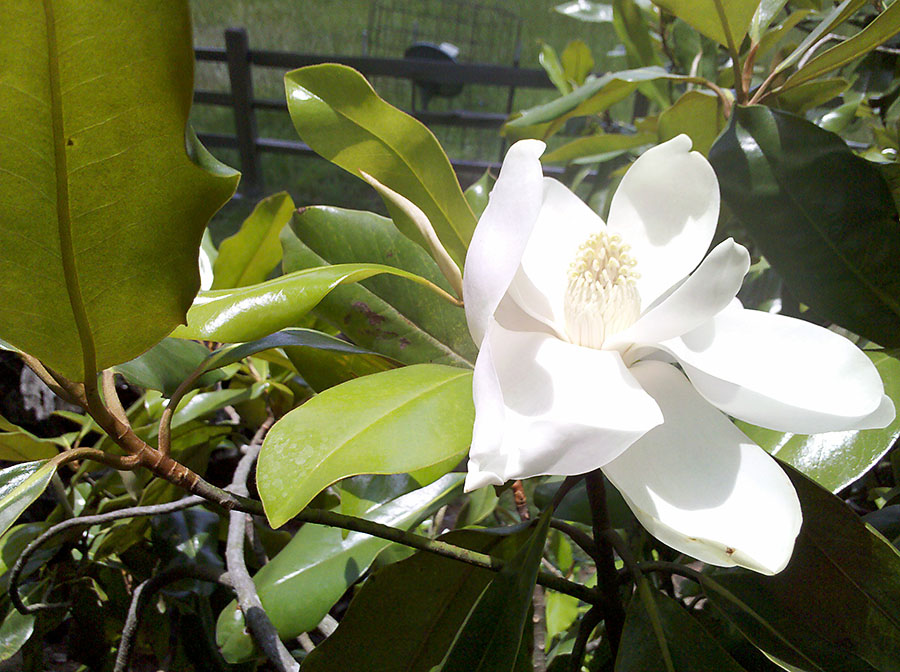