We’ve been discussing testosterone in our house.

Well, that’s not exactly right. I’ve been discussing testosterone. Everyone else has just been listening.

The lack of discussion among other house participants might be because the majority of them are male and for reasons outlined below they haven’t been particularly forthcoming about the whole subject.

Part of this slight obsession on my part is because of Poppy, our bull at the farm. I’ve watched him mature from a clumsy, undersized juvenile to a full on, bull capable of keeping his herd happy… hmm, well at least impregnated. (The early mating ritual regiment looks to be more coercive and pestering on his part. Eventually his girls must comply willingly.)

The other reason is those Low T commercials. The ones where the handsome, virile looking older men, none balding with bellies hanging over their belts, wander and shuffle giant white letters that spell out the latest amount of T filled gel you can buy. The instructions are spewed forth in rather innocuous sounding tones directing you to carefully roll the chemicals into your armpits diligently avoiding contact with any other person so as not to induce unwanted hair or breast enlargements on the wrong gender.

The subtle half-promise though, is one that every male mind gets:  you are probably going to be the man you once were, certainly the one you thought you were, at your sexual prime, about 17, as long as your armpits never played a part in any of those early scenarios.

The truth is, testosterone really is almost that amazing.

Testosterone is a molecule that your body puts together from 19 carbon atoms, 28 hydrogens, and two oxygens in just such a way that throughout the life of man or woman, insect or bull, that molecule travels your bloodstream infusing your mind as well as your nether regions with life altering results. One of many hormones that the human body makes, relative amounts in defined environments make the world of difference in combination with a host of other hormones, compounds, and substrates to perform an intricate molecular dance that makes you you and me me.

Before birth, from months 3 -6, androgen levels (hormones that ‘build” which testosterone certainly does) feminizes or masculanizes the fetus, providing a better prediction of whether you are likely to be called a tomboy, sissy, hunky, pretty, or foppish, over and above the simple criteria of whether you have XX or XY.

In puberty… well, we all know what it does in puberty. But just to recount a few of my favs, it makes hunky muscles on males and they begin to consider whether or not they will be courageous when called to do so. (This last point shocked me to realize. My oldest confessed when as a preteen I found him deeply in thought one late night. I worried about a lot of things in my teen, but never in the realms of valor.)

After birth and for a while, baby boys will have the same level of testosterone coursing through their little bodies that they will have at puberty.

During that time, in that strange dance of molecules I mentioned above, in the baby male bloodstream the testosterone is armoatized (think  atoms rearranged to make a different structure) eventually crossing the blood/male brain barrier as estrogen, altering their brains forever. The thought is that it’s masculizing their brain. In other words, preventing them from muliti tasking while making sure that from that point on they single mindedly follow whatever appetite they happen to be driven by at that moment, for the rest of their life. (Female fetuses make alpha-fetoproteins, molecules that swamp up all the estrogen in their  little bodies, preventing it from invading their brain. Yeah, God.)

By the time that stuff gets to the adult male body in the making, its done some kind of chemical magic on muscles at the expense of fat and convinced their regressed brains that proof of virility is something to occupy full mental resources, every 8 minutes or so.

And then, well, life changes again. If a man falls in love, his testosterone levels drop. Fatherhood has the same effect. And in a series of complicated experiments and observations, there is a suggestion that the presence of competitive activities rather than bond-maintenance activities are more relevant to changes in testosterone levels. Duh.

But, there’s an interesting caveat that probably has some basis in hormonal activity but doesn’t matter as much as just getting a handle on how women, with our fully developed brain, think about this whole thing. Even when guys pass their prime, imprinting on the brain of men lasts far longer than the T levels do and it’s that imprinting done right that we like.

It was midnight, not able to sleep, the right night for it, Suits was on USA. Suits is best watched in high def, for reasons that will be disclosed below, so sitting in the living room, amongst sons, I flipped the channel.

I couldn’t help myself.

The glitter of female appreciation must surely have shown in my features as I watched Harvey,  straight backed, confidence dripping from every inch of his manly frame, saunter across his office and smile and flirt smartly with his assistant.

“My goodness,” I sighed.

“This is embarrassing,” middle son complained.

“You get onto Dad if he looks at some pretty young female”, he states. Males always stick together. “And you’re way too old for him, Jan.”

He might have a point on that last comment. For the first part, I’ll almost bet that my thoughts about Harvey don’t run the same way as Silent Bob’s do when he sees a beautiful woman. Just saying.

That difference doesn’t need to be disturbing. Some things you just have to accept.

“You like Harvey or Macht? There’s a difference, you know.” This from youngest son. (Gabriel Macht  plays Harvey.)

What he’s asking is a valid question. Is it Gabriel’s amazing brown eyes, among other attributes or Harvey’s persona?

Gabriel is pleasing, that’s for sure, but for women, with brains that have a little bit more complex thinking capabilities , it’s as much about the confidence Harvey exudes than anything. That and well my personal preference of smart. Harvey Specter could still be a hunky character, able to attract female attention, if he was bald and had blue eyes.

Whether imprinting from varying levels of testosterone or part and parcel to the y chromosome, woman love men who they know can take care of them. No combinations of outside package guarantees that. It’s all about attitude and confidence. And the best thing: taking care doesn’t have an age limit on the man that can provide it. After those first moments of brain masculanizing, there is another singlemindedness that can occur, the one that can make men consider confidence as their birth right. That’s a good thing. T-levels won’t matter once that happens.

Because I’ve explained why my obsession with Harvey Specter is okay, he’s my handsome Cowboy for February 2013. Or maybe its Gabriel Macht.

He’s just an example of my celebration of the good things of male confidence, my homage to St. Valentine, irregardless of his personal T level, Gabriel’s that is. 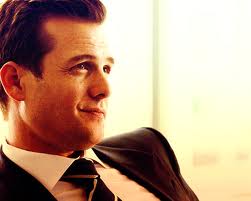 After dinner the other night, three men and me sitting in the living room with out much to say, we tuned in the TV. There are a jillion shows one can watch, most of them awful, but entertainging depending upon your bend.