Brenham is about thirty minutes from the farm. It’s the home of Blue Bell ice cream.  It’s also the place for the oldest synagogue in continuous use in Texas and in the middle 1800’s an all black woman’s college was founded there, an outcome of The Bureau of Refugees, Freedmen, and Abandoned Lands, commonly known as the Freedmen’s Bureau, established by Congress in March 1865 as a branch of the United States Army.

I mention all of this to make a point. Life was complicated even when there were no eminent fiscal cliffs or Honey Boo Boo shows to contemplate.

Today, Brenham is the county seat,  still largely rural, and produces 30 percent of the ice cream eaten in America despite the fact it can only be purchased in 20 states.

About every three months I recycle a variety of refuse items including cans, colored bottles, and scrap metal. It’s incredible how much of this accumulates on the farm. I load up my Jake’s F450, make the circle of recycle places and on the way out stop at the Brenham Citizens Collection Station where  green waste is turned into fine mulch. I buy a ton for $22.50.

It does my flowers beds at the farm some kind of good.

My men loaded up the truck this past weekend and I took off, traveling my  circuit, bouncing past old homesteads, cemeteries, and 1970’s strip centers. In the early spring, this is the place where a billion scarred Bluebonnet seeds bloom to blanket every corner and pasture in and outside the city. It’s a carpet of blue that makes you think of Heaven.

Now there are bales of hay dotting the pastures where newly born cavles frolick tracking their mother’s moo. Which also makes me think of Heaven.

Driving past the dusty parking lot of one of the local businesses, I looked for the rose I’ve noticed for as long as I’ve been recycling in Brenham. In the dead of winter, with a mist that’s not quite rain laying like a blanket across deep south Texas and the temperature hovering around 40 degrees F, I see it. That rose is still blooming. Its leaves are green, busy photosynthesizing in a winter sun. It was doing the same this past summer when it was 101 outside.

“I’m going to stop in here for a minute,” I tell my Mother, my most agreeable companion on most of these trips. I grab the box cutter that Jake  had put in his box of tools, 8 years ago.

An old guy sits at a desk, papers scattered and he looks up as I push the door open, the cold winter air rustling the leaves of paper on his desk a bit.

“I was just wondering,” I start, always a little uncomfortable with this request, “Could I take a cutting of that rose you have by the door? I’ve admired it for years.”

He doesn’t seem surprised, irritated, or curious. I can’t tell if he is the generous kind. His face, a bit wrinkled, is also a bit sad in that no smile threatens to surface, he comments on my request.

I restate my request, amending it a bit, letting him know that it’s okay if he says no.

He nods his head. “Sure, take a cutting.”

I tell him thanks, adding a smile hoping he knows I really mean it. He looks down, his face the same, pencil scratching across his papers.

The wind aids me as I open the door and taking the box cutter out of my pocket, I get the blade in place and look for a good place to take a cutting. There is almost no dirt where this rose grows. It’s a small space between the cement walk and the wall of the building. The plant is a good 6 foot tall. The branch I choose is close to the bottom and the box cutter has some trouble getting through the woody stem. Small rose hips decorate  the branch as well as a few faded but tenacious dark red, double blooms.

“You’ve always liked that rose, Jan, haven’t you,” Mother says, rubbing her long slender fingers together against the cold that as she has gotten older fills her bones in the winter time.

There are a lot of hardy, beautiful roses in Brenham. People have been taking, sharing, rustling rose cuttings for almost two centuries around this area.

In the middle 1800’s, sturdy, settler women from parts of Israel whose husbands brought the Torah to read in the tiny, Christian-church-looking synagogue in this dusty town brought Gallica roses, wrapped with care, in the back of their wagons. Gallica roses bloomed in Brenham, but before that they bloomed in an Israeli spring  two thousand years ago when a Jewish carpenter claimed he was the Son of God and the Son of man.

Right besides those Jewesses, big boned, hard working Frauleins, from the cool woods of Germany brought China rose cuttings with them as they crossed the Atlantic into the middle of Texas. Chinas, roses with extravagant color range, being remontant, bloom repeatedly in a single season.

The freed women of color, with first chances at education and their own plots of land to color for the first time,  likely found roses that they admired, among slanted gravestones and farmhouses and taking their own cuttings, grew beauty. It’s possible the very rose I admire on this winter of 2013 descends from one they propagated and thought pretty.

“Do you know how to root a rose cutting,” Mother asks, musing, her own past playing out in her mind. “My mother used to put them in an old mason jar. That was how people shared roses in her day.”

It must be a  practice not difficult, I think.

I parked the big truck in the grass at the side of the driveway of the farm and holding the branch gingerly,  its thorns brushing the callous on my hand, I walked around until I found the right place, east of the old farmhouse. It was a good place for old roses to root. The soil, slightly damp, loamy and dark, would get drops of water as they collected and fell from the eaves of the roof. Morning sun would shine on the cuttings, filtering to shade in the afternoon, while for the next nine months, in the secret mystery of soil, delicate and tender thready roots would sprout from their buried stems.

My dad used to say he’d be happy if he left this world for the next if he did so afloat in his john boat, cane pole in his hand, rounding the next bend. If I had a choice it would be with my hands in the dirt, a spade at my fingertips. As I dig, I consider that along with roses, those settlers brought Bibles and Torahs. Some knew how to cure hams and others shared unleavened bread.  Swarthy and white, black and brown, mingling with the native red, they all, each of them, dreamed and hoped, doubted and believed and each of them had to come to some conclusion about the value of this life.

“Why’d you pick that rose to rustle, Jan?” a friend of mine asked, when I’d answered the phone with dirty hands.

“It’s so beautiful. It blooms all year. It stands against mildew and bugs…” I replied, trailing off in words as I tallied the merits of my find.

“Rose rustling is sort of recycling, I guess,” he says, staying engaged despite a bit of rambling on my part, but  he’s thinking.

“These roses have stood the test of time,”I say. “They’ve suffered and survived and are tougher for it.”

“Reminds me of the words of Christ, Jan, the power of them,” he says.

He stops and gives me a chance to catch up.

“It’s we humans who undermine Christ’s words, the truth in them, the beauty in them, giving them no place to take root and grow as they are wont to do,” he finishes.

He knows me well enough to know how I will take his words.

It’s never been Christ who failed in grace and humility, compassion and understanding or unadulterated love.

We spend a few more moments in pleasantries but my mind is somewhere else. I place myself amongst the women who for generations have been rustling roses near Brenham. I cannot but guess at the strains and stresses they might have felt. I can tender the feelings they must have harbored for what was right and good and beautiful and for the love that they knew or wished they’d known.

I suspect, when its all said and done, they hoped and dreamed as I do. To know love. To give love. To wish I’d done love better, enough, and rightly.

I don’t know  how many of my little cuttings will take root, but today and until I round the bend, I hope among my thorny places, God grants me the courage to grow the words of Christ.

I know no other words that are better. 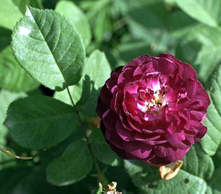