Beginner’s Greek is a romantic comedy. It is light and frothy and requires that you take leave of the humdrum, everyday world and enter a sphere where improbabilities rule. But isn’t that true of most romantic comedies? I have seen the author compared to Jane Austen, but I would say this book is more “When Harry Met Sally” than “Pride and Prejudice”. Despite all that and the fact that the book follows the predictable romantic comedy formula, it is a fun book to read. There are some unexpected twists along the way, and the writing is excellent.

The hero of the story, Peter, is an investment analyst with a flair for the romantic. He dreams of meeting his ideal woman and being swept off his feet. And believe it or not, that very thing happens to him! On a flight from New York to Los Angeles, he is seated next to a beautiful woman. He can’t help but notice that she is reading Thomas Mann’s Magic Mountain. (She’s not just good looking, she’s intelligent, too.) He is intrigued. When he finally manages to engage her in conversation, and they hit it off right away. He realizes that she is “the one”. She is attracted to him, too. She finds him very handsome, and their conversation is comfortable. She gives him her phone number as they prepare to disembark, and he promises to call her the next day. What joy! What rapture! Of course, in classic romantic comedy fashion, he loses the phone number. There is nothing he can do. He doesn’t even know her last name. She waits anxiously by the phone for a call that never comes.

Time passes. They both return home to New York. And then one evening, he sees her. Alas, she is engaged to … Well I can’t tell you everything, but you get the idea.

In spite of the familiarity of some of the scenes, I thoroughly enjoyed reading this book. The writing really is very creative. There are lots of twists and surprises in the plot. I would venture to say that most of the formulaic story line is done tongue in cheek, a gentle satire of the genre. The characters are engaging. Some are very likeable. And fortunately there are some who are downright mean and nasty. There is enough conflict and there are enough difficult situations to carry the plot along in a way you may not expect.

A lot of Collins’ prose is very funny. At Peter’s wedding (not to the love of his life, I am sorry to say), he muses about the clergyman who is officiating.

In dignity and dress, Peter believed he compared quite unfavorably to the    officiant, who stood to his right. Reverend Micklethwaite looked awfully good in his surplice and gold-embroidered stole. He was a handsome, robust man in his 60s with a full head of steel gray hair and weathered hands. From what Peter had gathered during premarital counseling, it was pretty clear that Reverend Micklethwaite had spent a good deal more time thinking about the gauge of his spinnaker sheets than about the doctrine of the Real Presence. He stood there beaming, aglow with vitality and optimism

Beginner’s Greek strikes me as the perfect summer read. Have fun! 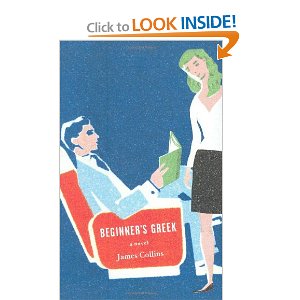