Tracy Chevalier is a writer of historical fiction. She has a fine ability of bringing to life various periods of history, joining real people and events to what she imagines are the untold elements of a story. Her most famous book is probably Girl With a Pearl Earring which tells the story of the Dutch artist Vermeer and his famous masterwork. That book was made into a film starring Scarlett Johansson and Colin Firth.

Remarkable Creatures is not nearly as romantic as that story, but it is compelling in its own right. It is the story of two women, Elizabeth Philpot and Mary Anning who were fossil hunters and at the forefront of some very exciting discoveries in the early nineteenth century.

Elizabeth and her two sisters moved from London to the town of Lyme Regis on England’s southwest coast when their financial situation took a negative turn. They lived in reduced circumstances but comfortably there. Even though their income was modest, they were considered a part of society in the small community.

Mary Anning had lived in Lyme Regis all her life. She was still a young girl when the Philpots moved there and she first met Elizabeth. Mary had been struck by lightning as a baby, and she always believed that experience had marked her for greatness.

Mary and Elizabeth were not people who ordinarily would have become friends. Elizabeth was a “lady” and Mary was the child of a poor laborer. The two were drawn together by their common passion for finding fossils. The coast at Lyme Regis was vulnerable to landslips, when great chunks of land would break away from the sides of the cliffs. As a result, fossils were regularly found there. The area became a holiday destination for the wealthy who loved to collect these fossils. Mary’s father had taught his children how to find these “curies”, as he called them, and he had a small shop where he sold them to tourists. Mary had an uncanny skill for finding more than anyone.

Because she was poor and because she was female, Mary was in a position to be taken advantage of by those who sought to profit from her finds. Elizabeth’s status in society enabled her to help Mary in her dealings with these people and prevent, at least to some extent, their exploiting her.

One day as twelve-year-old Mary combed the lonely stretch of beach for “curies”, her eye was drawn to what she realized was an intact fossil skeleton embedded in the cliffside. She called it a crocodile, but she knew that it couldn’t really be that. The name eventually given to the animal was ichthyosaurus.

Naturally a lot of controversy followed her finds. Questions arose about animals having existed at one time on earth that had become extinct. Was that possible given what they believed about creation and the age of the earth? Would God really have created animals and then let them disappear from the earth? Although most of the scientists of the day were able to reconcile these points, many of the clergy and churchmen were appalled at the very idea. They felt threatened by the new knowledge.

The story of Mary, a poor, uneducated girl who helped to launch this new branch of science is really an interesting one. She along with her widowed mother and her brother were fighting off the workhouse on the one hand, and on the other hand, she was making important discoveries and working with the leading geologists of the day.

Remarkable Creatures is a tale of friendship, its ups and downs, struggles and disappointments. It is also a story about gender inequality, scientific discovery and religious controversy. I loved Mary Anning. She was bright and courageous and tireless. The book actually inspired me to take a look at other sources for facts about her life and work as well as the region of Lyme Regis. It is fascinating. I thoroughly enjoyed reading this book. 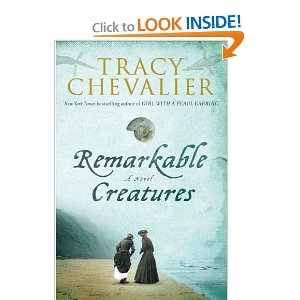