I love food. Even as I clatter away at the keyboard, I am munching on a light snack in anticipation of the sirloin burgers for later. Something about the millions of movements and interactions of ribosomes, proteins, neurons, and other small but vital molecular machines and molecules requires in me an amount of fuel that is belied by my never increasing weight. Some of my friends who are similarly afflicted blame a small fat kid hidden inside them. The intricacies of this whole process are only slightly understood by science, and even less so by myself. I do know that these small scale activities create a requirement for certain sources of energy, and that all of these things combine to give me a certain taste in food, among much else they do.

I must explain two things now. First, I grew up in a house with a microbiologist mother, a microbiologist brother, a brother who excelled in B.S. and I don’t mean the degree, and a father with pretty much a photographic memory. So the above paragraph is the product of a mixture of all these things. In other words when I say I “know” something it is heavily influenced by my oldest brother and his B.S. abilities. Second, I just finished five years in the United States Army two of which were on staff. This means that the question most often asked is “So what?”.

Now, to finish to my introduction and the looming “so what”. The answer is simply that while for some an increased need for fuel translates to quantity over quality, for me it is a delicate balance. And it is this that brings us to the real meat of our story… how to be a good cook.

From a very young age my mom and my grandmother would have me and my brothers sitting on the kitchen counter “helping”. From stealing freshly mixed cookie dough while no one was looking to carefully measuring ingredients, we spent a great deal of our respective youths learning the art and science of culinary endeavors.

I say art and science because while knowing that beating heavy cream will first yield whip cream and then butter is important, so is knowing that a recipe calling for one tablespoon of salt may, depending on taste and other ingredients, require half or double that amount. This is a key point to our end because flexibility and adaptation are key to making delicious food. Experience is also a factor. For some reason the more you cook, provided you pay attention to what is going on, the better your food over time. Yet another aspect is your ability to use your senses to create a combination of the correct seasonings, textures, and presentation to make an appealing dish.

Now mixing all of these things in the right amounts will provide you with, hopefully, good food… but is this what makes a good cook. They are certainly attributes of a good cook… but not how to form a good cook. You see the real point of the story of sitting on the kitchen counter was not the understanding of some sort of weird chemistry or biology… but the understanding of community, cooperation, and friendship. I have cooked a lot of food. Some, like tonight’s sirloin burgers, was good and some, like my first attempt at a blackened steak, not so much, but the one universal constant was that when I was in the company of people I cared about, the experience was always memorable.

So what? So to be a good cook, you need to try. You need to taste things, mix things you wouldn’t normally, write down all you do, and maybe even read a cook book or watch a cooking show; but most importantly do all these things with people around you enjoy being near.

That and don’t forget a pinch or more of salt. 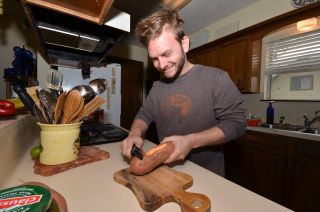