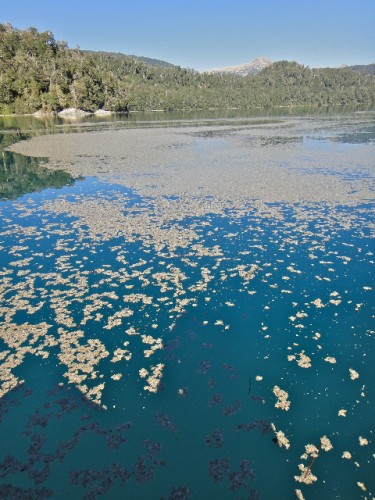 On June 4th, a volcano in Chile’s Puyehue-Cordon Caulle chain erupted. It had been dormant for 50 years. The eruption sent a towering cloud of ash into the air and flights as far away as Australia were canceled. Along with the ash, pumice rained down on everything. When the sterile pumice hit the water in the lakes it cooled off.

Most importantly, it floated.

Pumice is weird. Basically it’s solidified frothy lava. If you eject super heated, highly pressurized rock from deep in a volcano into much cooler, less pressured atmosphere, bubbles form from the trapped water and CO2 that was in the lava.

(Think jostled can of coke and subsequent opening…)

Pumice has it’s uses. If you go get a pedicure, they use it to scrape away dead skin. If you buy stone-washed genes, pumice was the stone that did the washing. For science, brand new pumice and their floaty selves can provide insight into how freshwater biology utilizes new opportunity.

In the lakes of Argentina the pumice made little rafty type life boats for anything living in the water and air around it to get on and colonize.

It was a really cool natural experiment.

It came out of the volcano sterile (what could possibly be living on melted rock) and at some time something is going to find out how to use it, beneficially.

(Think microbes here and just like in humans although not as mental about it, some microbes can be opportunists, some are really picky, and some wait for others to make life easier for them. And some, heck, we have no idea what they do…)

In the really cool way that science has of working, my friend and collaborator Jim (who knows about lakes let me tell you) had met Esteban and Beatriz, scientists who work in Patagonia, and voila! a project was born.

It’s all about timing.

Josh and I are here in Patagonia for the next 9 days to take samples. Some of us will extract the DNA, others will sequence it, we’ll analyze it and then have some idea what can make use of the little floating condominiums that are pumice.

We don’t know where our analysis will lead.

Biology is really good about keeping you guessing and then handing you something you never expected.

There are some theories out there though.

Curiously enough, four other scientists, without knowing anything about these pumice islands in Patagonia, just this past October suggested that pumice just might be where life on this planet got started. Martin, Richard, and Sean of Oxford and David of the U Western Australia suggest that holey pumice might harbor just the right properties for the earliest communities of microorganisms.

We’re a long ways away from that with out experiments here.

Or so we think…

Josh and I will be posting for the next 7 days. Do some science with us and check in each day. We’ll let you know what is going on .. in Patagonia, where the ash is still falling, the volcano is still erupting, and in Bariloche they make chocolate…