My search was unlikely to prove fruitful, 20 or so vintage windows, still intact, identical in build wasn’t likely.

Tempting fate, I optioned my Craig’s list search just a bit farther out from Houston, all the way to southwest Arkansas, and there they were; 24 vintage windows, glass mostly intact, double sashed, cast iron weights to boot, all in craftsman style. The owner told me they were from 1896 when the house she was renovating was built.

Now my idea was to build a screened porch and then I thought it needed to be glassed-in for even more use in our mild Gulf coast winters and that was when I hit upon repurposing old windows.  When the owner told me 150 dollars for them all, including two little ones, I figured it was basically manna from Heaven and I would be in arrears with God should I turn them down.

I was praying Silent Bob would think so too.

We borrowed a 16 foot trailer, stuck it on the back of the farm truck and headed for De Queen.

Turns out De Queen was a good 6 hours from Houston. SB and I watched the landscape change as we traveled roads familiar to us from decades ago, taking our sons to visit relatives who lived all points north. I was in a different place and time then and the thought of how much SB and I had traveled made me both sad and thankful.

Northwest Arkansas is beautiful, I thought to myself as we pulled into De Queen following the navigation on SB’s smart phone. The route took us through downtown and over the railroad tracks. I remembered why I knew ‘De Queen’ and the weird distant, half fomented memories that had been misting around in my mind the whole way up here cleared a bit, as I remembered bits and pieces from my MoPac RR switchman employed dad’s conversations.

“SB, De Queen was a railroad town, wasn’t it?” I said in the general quietness of the car as we made our way through old neighborhoods. SB nodded.

In the late 1800’s a man named Stillwell conceived of a venture. Part owner of the Kansas City, Pittsburgh and Gulf Railroad (think part owner in Dell or Apple… railroads in the late 1800’s were as transformative to society as Ipads and Smart Phones are today), decided a rail line serving all points between Kansas City and Port Arthur, Texas would be a prime investment.

Cotton and timber from northern growing regions main lined to the Gulf Coast; even I might have had the business acumen  to consider that investment. About the time Stillwell conceived of the plan the depression hit and funds in America dried up. He traveled to Holland to look for investors.

Apparently no body inside Holland was interested, but Stillwell had run into a Dutch guy outside of Holland, a coffee broker, on one of his trips to Europe, and contacting Mr. Jan DeGeoijen convinced him to join the project. In a few months the two raised $3 million dollars.

3 million dollars through telegrams, a fledgling postal service, and transatlantic crossings that took weeks to get where you were going on ocean going vessels.

These guys were good.

Stillwell promised DeGeoijen he would name a town after him along the line. Stilwell might have traveled the world and been down with all things Dutch, but the local southwest Arkansas residents wrestled with that many vowels strung amongst odd consonants.

As we pulled up to the low pitched roof line of the house that had accommodated 24 identical windows since the railroad carried cotton just down the street, you could see the effect that the craftsman movement had on prosperous towns along railroad lines during those years. Despite subsequent decades of neglect and abuse, poverty almost a given in towns like this in Arkansas these days, the beauty of things made my hand and sensitive to not being overly decorated shown through the 24 windows lined up on the front porch.

It was late when we finished loading them and re-tracing old familiar routes back to home in Houston. I listened to the rattle and hum of old windows and history in the trailer behind us.

I unloaded them the next week and took the time to look at the nails. It’s more likely these windows are from the early 1900’s. Stillwell was just a memory in someone’s ledger books by the time they were installed in that old craftsman home.

Come to my sleeping porch once we get it built, and look out through those windows with me.  We can share, you and I, history or philosophy or God, thinking all at once about the temporary nature of things and yet, the everlasting implications of the paths of life set before us all. 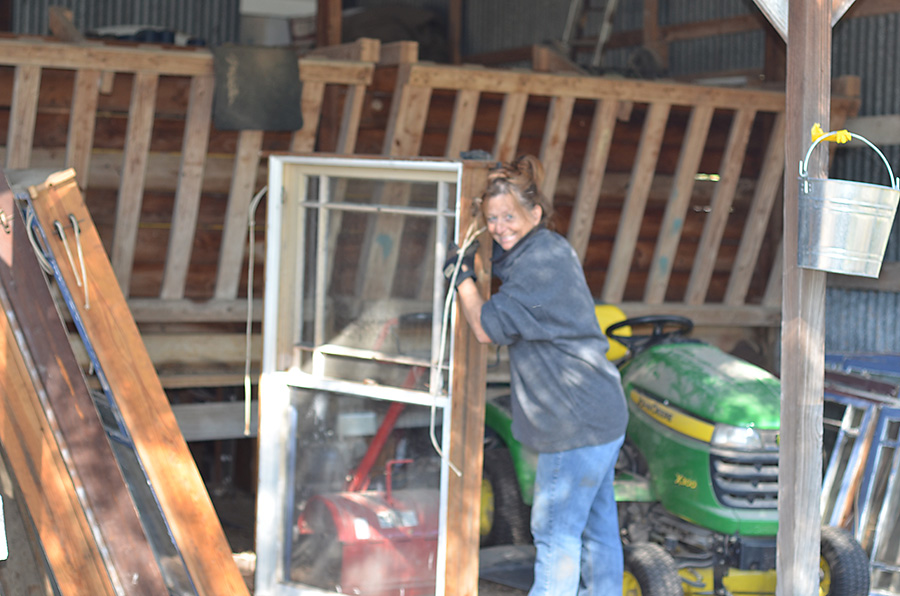