In Praise of Pizza and Handmade Olives

The island of Santorini, one of the many Greek Islands that draw tourists, is about a 2 hour ferry boat ride from Crete if you take a flying cat. It’s one of those places that give you pause as you marvel at the tenacity of humans for building a home. Dwellings cling to the promontory sides of a volcanic caldera, dressed in blazing shades of white against a blue Aegean sea. It’s this interrupted ring of sheer cliffs, shaped like a crescent that remains from a once solid island, blown into pieces by a volcano 3600 years ago. When the ashes and smoke settled the caldera, filled by the sea, couldn’t quite cover the top of the volcano that rose in the center. Down deep, beyond sea floor to the place where the puzzle block of continents bump and grind to the tune of tectonics, water simmers. It rises to the surface in springs around the volcano. You can take your rest in the hot springs there if you life.  Soothing yourself in the sulfidic waters, it’s not likely that many will wonder at nature’s subtle reminder of the destructive force and pressure that she can exert willy nilly on man should he happen to be around at an unlucky time. (It’s this eruption that took out one of the most advanced civilizations, the Minoans, and if you’re fanciful, you can consider that nature, in her devilry, took the time to drown Atlantis as well.)

Now, in that volcanic arc, dwellings are stacked and juxtaposed upon each other, following the demands of the underlying geology. They emerge as informal, messy, whitewashed beauties, as similar to each other as they are different and amid the cobblestone pathways and narrow roads that link them in the town of Fiera, are a thousand places to eat. 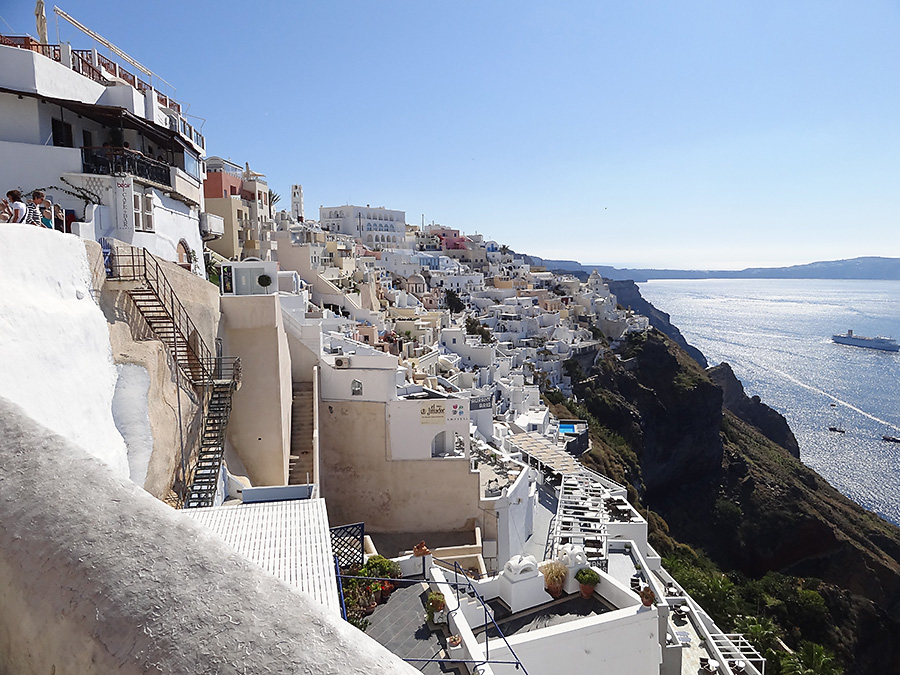 “Pizza,” I said as Josh and I meandered, and while this might seem strange and more Italian than Greek, it was our observation that a number of Greek restaurateurs had invested their culinary skills in this direction. Down a tiny lane, headed towards the sea, to the right if you were facing the volcano, a sign indicated that up the winding staircase, Louis was available to make pizza per your request. 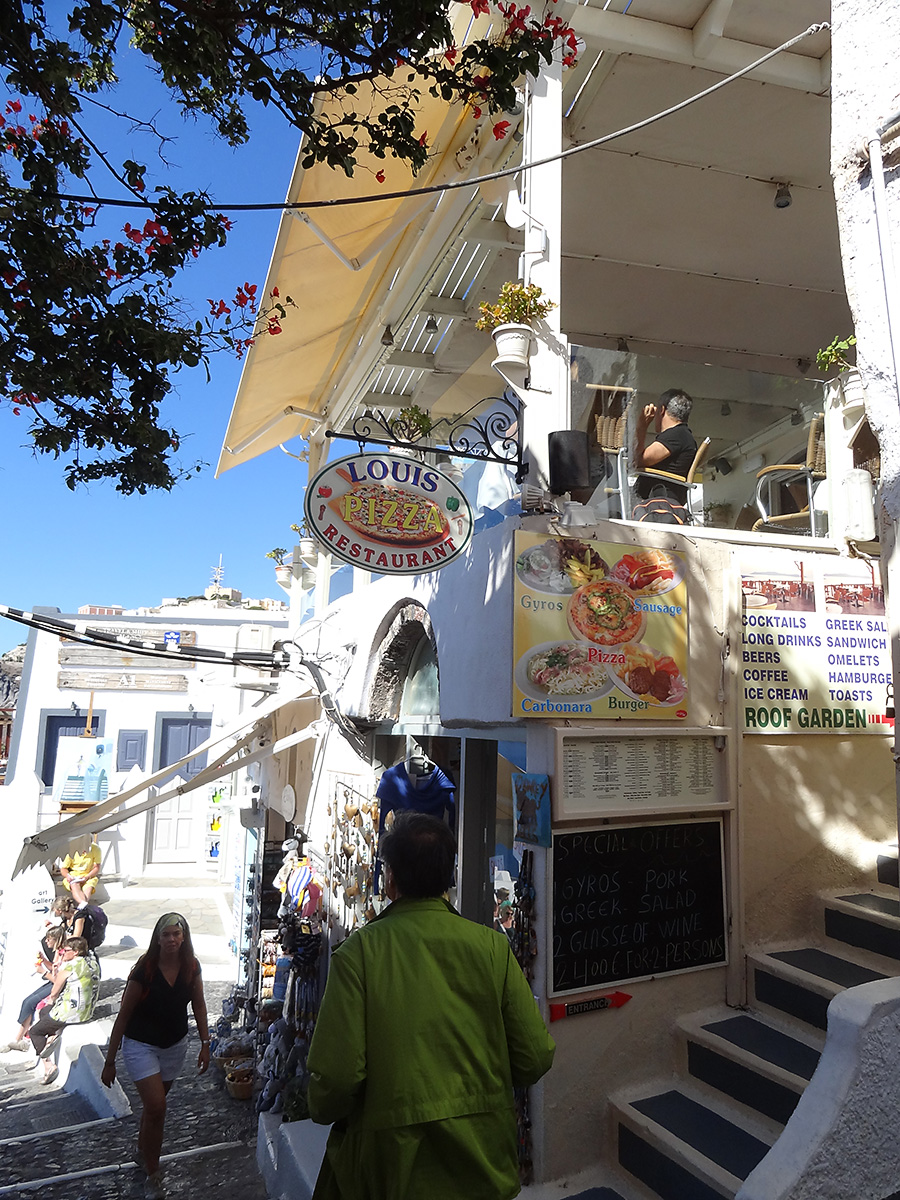 The dining area was a small patio terrace hung over the shops below with an unobstructed view of the caldera. We were the only patrons. Louis brought us the menus. His English was fine but he didn’t think so. He spoke a bit shyly and repeated our order enunciating each syllable.

“You want San-to-rini salad. You would like Greek pizza. And to drink?” he enunciated slowly.

“He looks a bit like Anthony Hopkins,” Josh said as Louis retreated to the kitchen. I recalled that they served fava beans here.

We smelled the pizza long before it arrived at our table. On the air, the delicate odor of fine olive oil combining with yeasted flour wafted across the patio and down to the sea.

Louis sat our dinner down in front of us. 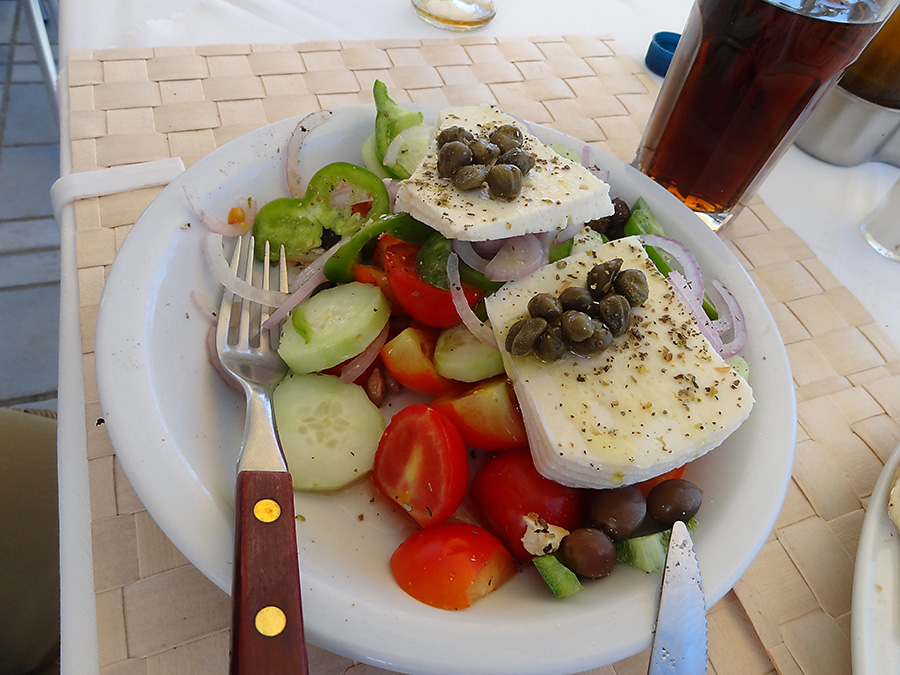 It strikes me that anyone who opens a restaurant does so with the intent to make a living. Louis did it because of his joy of cooking and his desire to share that joy. 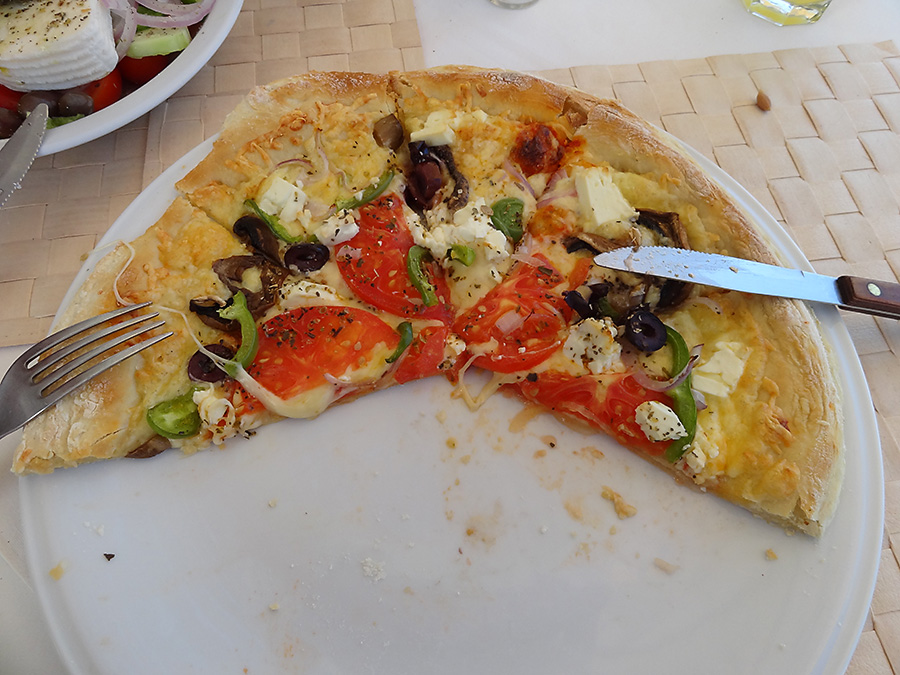 With one pizza between us and Josh not eyeing my salad as much as I was his pizza, I restrained myself to two pieces. Greek grown tomatoes and cucumbers filled my salad bowl with a big slab of feta topped with capers and ringing the outside were tiny green olives. Everything in my bowl was lightly tossed in olive oil and spices.

I popped an olive in my mouth.

Within minutes, the pits that used to those tiny olives were piled on a napkin and both Josh and I wished there were more. “Maybe they have them at the grocery store across from our hotel,” I said. Josh nodded.

We exclaimed, Louis beamed, and I asked.

“I cure them,” he said and went on to explain that in this tourist season he had served 140 kilograms of these fine little olives and he had but a small jar left of them. He told us how he used water, for 20 days to draw the bitter protein that inhabited fresh olives. And then, using his own pressed olive oil, he cured them further with vinegar, salt, and lemon.

“They do not sell my olives at the store,” he said, his Anthony eyes crinkling at the corners. Whistling away from us, a bit jaunty in his step, Louis retreated to the kitchen.

We watched as the sun set in Santorini, on it’s journey westward, now rising along the California coast. Gathering our belongings, we moved away from the table. 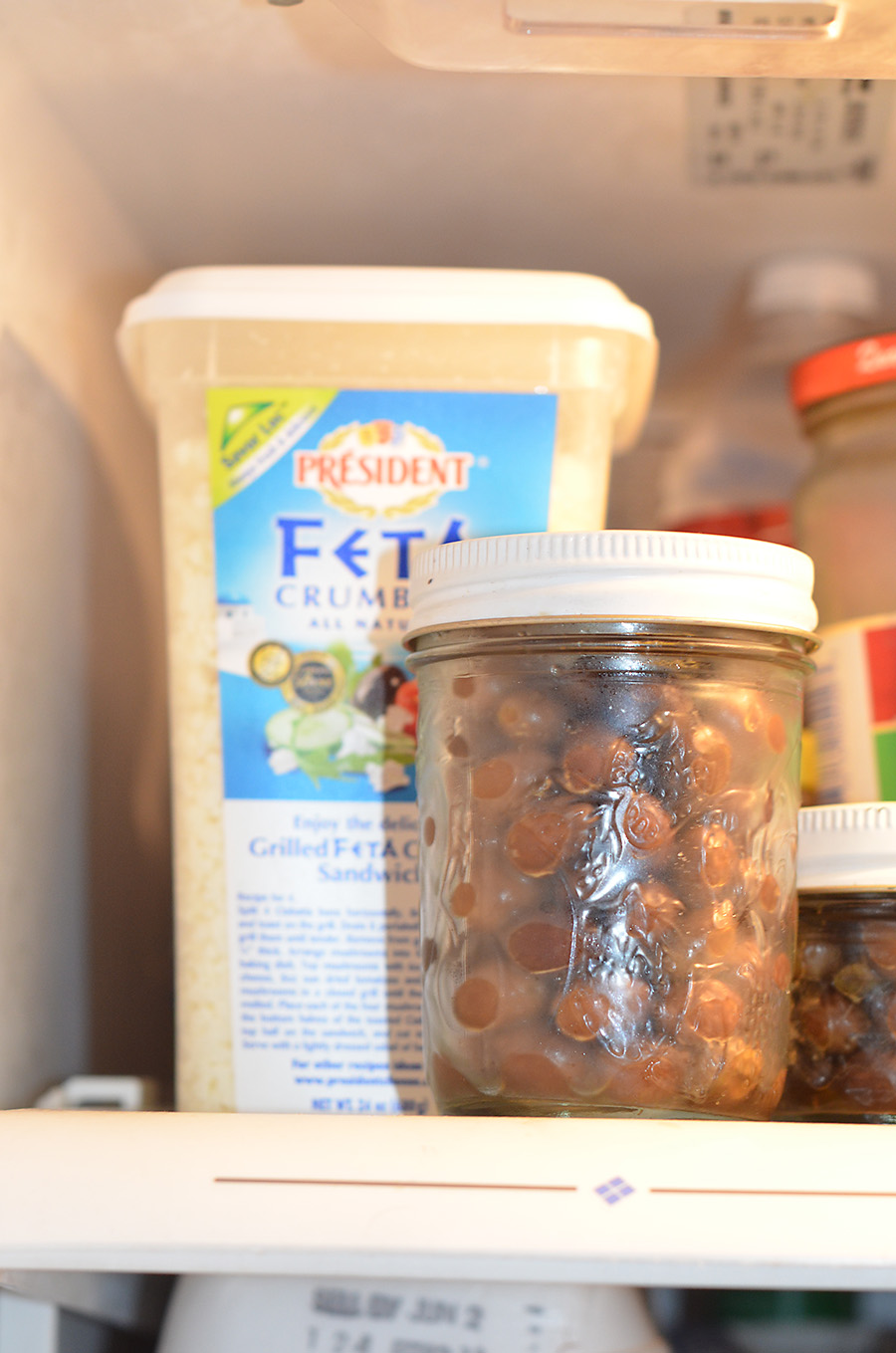 Should you go to Santorini, go to Louis’. Let him make you pizza and try his olives. As you sit on his patio think about the power that lies deep in the earth below you that can change the face of a landscape. And then for a minute, think also, that no matter where you are or where you sit, about just how powerful a simple kindness, for no other reason than graciousness, changes the landscape of the face, for those who received that kindness, but of the giver the most.