A Fraction of the Whole

About the most concise and accurate assessment I could give about this book is: It is really, really funny. I laughed and I am pretty sure I annoyed my husband, interrupting what he was doing to read passages aloud to him. I would say that it is funny the way that Kurt Vonnegut is funny. There is a lot of bizarre stream-of-consciousness narrative that definitely carries the reader to some new places. But that’s a good thing, right?

This is the story of a family. (But what a family!) We meet three generations of the Dean Family of Australia. Mr. and Mrs. Dean are the grandparents, and their part is somewhat limited but profound in its influence. There are their two sons, Martin and Terry. And there is Jasper, Martin’s son who narrates most of the story.

Even though Jasper tells the story, it really centers around his father, a philosopher and genius who walks sometimes a little too close to the edge of sanity. We hear his voice in the story as well as Jasper’s. He is paranoid and compulsive and manic and infuriating.

Martin was a man with big ideas and a lot of the story explores those ideas and what results from them. He spent several of his early years in a coma. This would become a defining factor of his life, because from it came his unusual way of looking at everything.

“Describing the thoughts, visions, and sensations I had inside that coma is near impossible. It wasn’t the nothingness, because there was quite a bit of somethingness (when you’re in a coma, even anyness is good), but I was too young to make sense of the experience. I can say, though, that I had as many dreams and visions as if I’d consumed a canyonful of peyote. No, I won’t try to describe the indescribable, only so much as to say there were sounds I heard that I could not have heard and things I saw that I could not have seen.”

Martin and Terry had the same mother, but they had different fathers. Mr. Dean tolerated Martin, but he pinned his hopes on Terry. When Martin first awoke from his coma, he became Terry’s hero. Terry wanted to be just like his big brother who had seemingly awakened from death. He was eager to copy his every move.

“He adored me. He idolized me. When I lay all day in bed, Terry lay all day in bed. When I threw up, Terry plunged his fingers down his own throat. I’d be under the sheets curled up into a ball, shivering uncontrollably with fever, and Terry would be curled and shivering, too. It was sweet. My father was scared stiff for him, for his actual son…”

Fearing for his younger son, Mr. Dean enticed Terry into Sport. It took some work, but Terry finally learned that he was not an invalid like his brother. He became an athlete, and a very gifted one. At that point the lives of the two brothers diverged into very different directions. Where they went will surprise you. I promise.

Martin always kept journals that contained his thoughts about life, death, the meaning of life or its lack of meaning. He wrote about his big ideas and what he hoped to accomplish through them. It was through the journals that Jasper began to get a glimpse of who his father really was and who he was.

Martin truly loved “Humanity”, but he didn’t like people very much. Mainly he wanted to be left alone to think about his newest big idea, how he might put it into effect to change the world. He once wrote in his journal:

“Emerson understood! ‘The moment we meet with anybody, each becomes a fraction,’ he said. That’s my problem. I’m ¼ of who I should be. Maybe even 1/8th.  Then he said, ‘The voices which we hear in solitude grow faint and inaudible as we enter the world.’ This is my problem exactly. I can’t hear myself!”

When Martin was a young man he traveled to Paris in search of a lost love. It was there that he met a beautiful and disturbed young woman who became Jasper’s mother. She never made the trip back to Australia, but Jasper went with his father and there he grew up under the supervision of this extremely fascinating and disturbing man. He was often home-schooled. His dad was brilliant, but I doubt there was much going on there that would appear in an approved home-school curriculum. There is no question, however, that he was getting an education. The interaction of father and son is fascinating. Martin drove Jasper absolutely crazy. He sometimes wanted to cry, to scream, to pull out his hair in exasperation. Sometimes he hated his dad. But through the course of his surreal life, he learned some things about family and some things about love. Looking back over his life, he was able to write this:

“’Martin Dean was my father.’ The act of writing this sentence knocked the wind out of me. All of a sudden I felt something I’d never felt before—-privileged. I suddenly felt better off than a billion other sons, privileged that I had had the good fortune to be raised by an odd, uncompromising, walking stew of ideas. So what if he was a philosopher who thought himself into a corner? He was also a natural-born empathizer who would have rather been buried alive than have his imperfections ever seriously hurt anyone. He was my father. He was a fool. He was my kind of fool.” 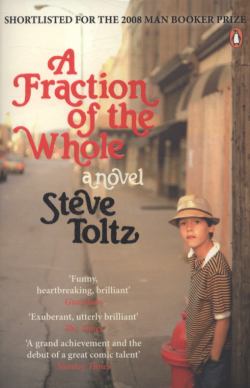