“Ten days after the war ended, my sister Laura drove a car off a bridge.” Suicide? Accident? What happened? This intriguing book leads us to an answer.

Laura and her older sister Iris were the granddaughters of a wealthy man who founded a button factory in the Canadian town of Port Ticonderoga. Apparently there was a lot of money in buttons in the early part of the twentieth century. But by the time Laura and Iris came along the business had begun to decline. They were still the privileged daughters of the town’s richest man, but their silver spoons were starting to tarnish.

Laura and Iris were kept separate from the other children of the town. Their father did not believe it was appropriate for them to mingle too closely with the children of his employees. As a result they lived an isolated childhood with only themselves for company. There was a kind housekeeper who took care of them after the early death of their mother, and there was a string of inept, or worse, predatory tutors who were in charge of their rather spotty education. There grandfather’s library was their true teacher.

When a group of Communist agitators came to town to organize unions in the factory, both of the girls fell under the spell of one of them. They both fell in love with him, and conspired to hide him when he was on the run from the law.

This book is really three stories in one. (Some say four.) The reader is advised to stay alert and pay attention to details as the stories move seamlessly back and forth.

Iris as an older woman tells in a series of flashbacks the story of her life. She begins with her childhood with Laura who was her younger sister. Laura was a vague, other-worldly kind of person who needed a lot of looking after, and Iris was expected to take on that responsibility. Iris introduces us to a work of fiction authored by Laura and reveals that, after her death, Laura had become something of a local celebrity. She had a cult following, people who loved the book and were often looking for ways to memorialize her. The book was titled The Blind Assassin. The complete novel appears within the larger story in this book. It is a story of two young people who meet secretly in various dark and out of the way places. The young man entertains his lover with science fiction stories. One of those stories is told in its entirety in Laura’s book. It is a story of an assassin who falls in love with the woman he is sent to kill. That’s all clear, right? There is a story set in a novel set in another story. It must have been a daunting undertaking, but Atwood is more than equal to the task.

Iris’ story includes her “arranged” marriage to a wealthy businessman and her relationship with him and his imperious sister who is determined to control every aspect of Iris’ life. She honestly reveals what she likes and dislikes about being a rich man’s wife. But behind it all is the feeling that she had no real choices in her life, that other people had always controlled everything she did.

There are many interesting themes and elements: the culture of a factory town in the early twentieth century, the fashions and customs of the late thirties and early forties, the prevailing attitudes toward women and their place in society, family, loneliness, and isolation. As you can imagine there are lots of twists and turns. I found the story to be full of surprises and very enjoyable to read. 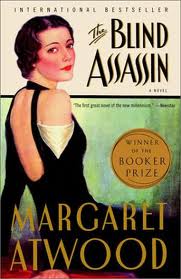