This is the story of a dog’s life.

It was the winter of 1998, a Houston Christmas Eve and the weather had been hovering around freezing most of the day. Although I can’t picture the scene distinctly, I think my oldest, Jake was in his rugged and tattered denim jacket when he came through the door and told me to close my eyes. Jake, ever the shopper and a man with a heart that lived for the giving season, I waited in wonder at what he might have bought this time. With typical Jake flourish, his blue eyes dancing, he produced a cardboard box. In it was the biggest 6 weeks old yellow puppy I have ever seen. Having just put down our family dog, Red, a Collie mix who was mostly Shepherd, (the alpha dog who viewed us as his pack, which we were), I vowed to never have another dog. I would never have told Jake. I acted with all the tenderness a mother who loves her son for a gift he obviously loved to give, but for a hundred reasons that went through my mind in that moment, I didn’t want another dog.

Jake placed the fat, big yellow pup on the carpet in the living room and I wondered how soon he could be potty trained. I wondered how much he was going to cry for his litter mates and I wondered, briefly, how much Jake must have paid for him, because it was obvious, he wasn’t a mutt.

As the story unfolded, Jake, a first semester freshman at A&M, (who unknown to us at the time would produce the lowest semester GPA I ever heard of despite the dropping of multiple classes, one of them the only one he was passing), while scouring the area around Bryan/College Station for trees for bonfire also took the time to find a find a breeder with pups. I have no idea why he chose a lab, maybe just the luck of consequence, a litter ready for gifting at Christmas, but I know why he bought the dog. He bought him to soothe my heart for the loss of Red. And he thought, no, he knew, it would be the finest Christmas present, because of the potential that the dog had of giving. I also know he chose this particular one out of the bunch, not because he was the runt, but because, in Jake logic, was clearly the best because he was biggest by far.

The yellow pup meandered about through the next couple of days and we oohed and aahed, but I worried. Having watched him I began to suspect something was definitely wrong. Agile enough though huge and really big headed, the pup bumped into everything, frequently falling into a backward, heavy puppy flop. Undeterred, he was always back at it again but most often with a repeat of the event. I determined he was blind.

I worried at mentioning this to Jake.

“That’s pretty funny,” Jake mused, laying on the carpet early in the Christmas break, the pup meandering over to him while we all adjusted to each other and Jake played his special brand of play with him. “His head is so big, he can’t even hold it up yet. His ears flop in the way and he can’t see where he is going.”

It was with that kind of insight, Moses mostly my dog, it was I who named him, but really above everyone else in the family, he was Jake’s dog. For the next 7 years, through the life of a family, Moses was part of it.  Sons came and went in the rooms of our house, to live in other places, far and near. Jobs were lost and won, wars came and sons went, and life was up and down on a number of levels and then, Jake went home to heaven.

For the next 6 years, Moses, Jake’s dog, was a repository of the love that Jake freely gave that I couldn’t reach.  He seemed a remaining earthly connection; he helped to stop the bleeding of the huge, Jake sized hole in my heart.  And aging Moses, a big dog with big dog, unneutered problems, hung in there, despite some close and desperate calls. There was a one pleasure/constant in Moses life, the dog loved to eat and remained indiscriminate in choice all his life.  To the end, I witnessed that nothing was off limits to try.

If I let my mind wander this Monday morning about Mose, it mostly goes to the 6 months between Jake coming home from Iraq, living with us, and going home to Heaven. During that time, Jake never entered the house that he didn’t go through the back gate to Moses first. It was an unfaltering ritual. If I saw this a hundred times in the daylight, it happened just as often at night. In bed and listening through our balcony door, just mere feet away, in the dark I heard the gentle squeak of the back gate registering Jake coming in and he would whisper, “Moses” to a waiting hound. What followed was nothing but pure affection, and in my mind’s eye, then and now, it’s Jake stroking Moses for minutes, never hurried, a certain serenity, a constancy and ease tinged with acceptance of life, however it may go. At those times they were in the moment, no matter what.  In the way that only animals who are true companions to their masters can do, Moses returned the favor of genuine love. Many a nights, I wished to dream of that squeaking gate.

So it’s this fall September, just shy of Moses 12 years here on earth, that I put Moses down. Howard, I don’t know what God has you doing up there but if you’re in Heaven listening, it didn’t happen the way your gentle hands helped me ease Red. Whether it was inexperience with the little young vet or the fact that it was true to Moses’ heart, it took too long and too many attempts. Moses unconsciously, seemed to snore to the end.

Maybe it was a few too many minutes for me, minutes similar to the last ones of a son with massive brain injuries whose heart has to be the last thing to give up.

Moses would never be known for his intelligence although it’s my contention he would have made an excellent dog for nursing home visits and pediatric cancer wards. He was gentle, big, trainable, and extraordinarily beautiful. It is true that he stank. It was but one of the manly things about that dog though, one that those of us not truly canine might not fully appreciate. Mose and I traveled a lot of ground in the woods around our house, reconciling the loss of old Jake and for that I am eternally grateful to him for his companionship.  I won’t miss Moses’ aging joints or his atrophied back shanks. I won’t miss the ugly, bleeding, unhealable wound on his left back leg or the senility I saw creeping into his naturally not intelligent brain. I won’t miss his having to deal with Houston summers or longing looks into the lake that he couldn’t really maneuver any more. But as I cook dinner, when there is a little bit of juice left over from the roast, I will miss not being able to give it you, Mose.

It’s that we miss… the gift of giving to those we love. That’s the real loss.

If I didn’t know there was a Heaven and giving was the eternal goal, life would be more than hopeless. It would be ever more senseless, if moments of pure steadfastness that come in the shape and form of dogs were seen as mere fleeting, ending moments and not what they actually are, the truth that there is a heaven. 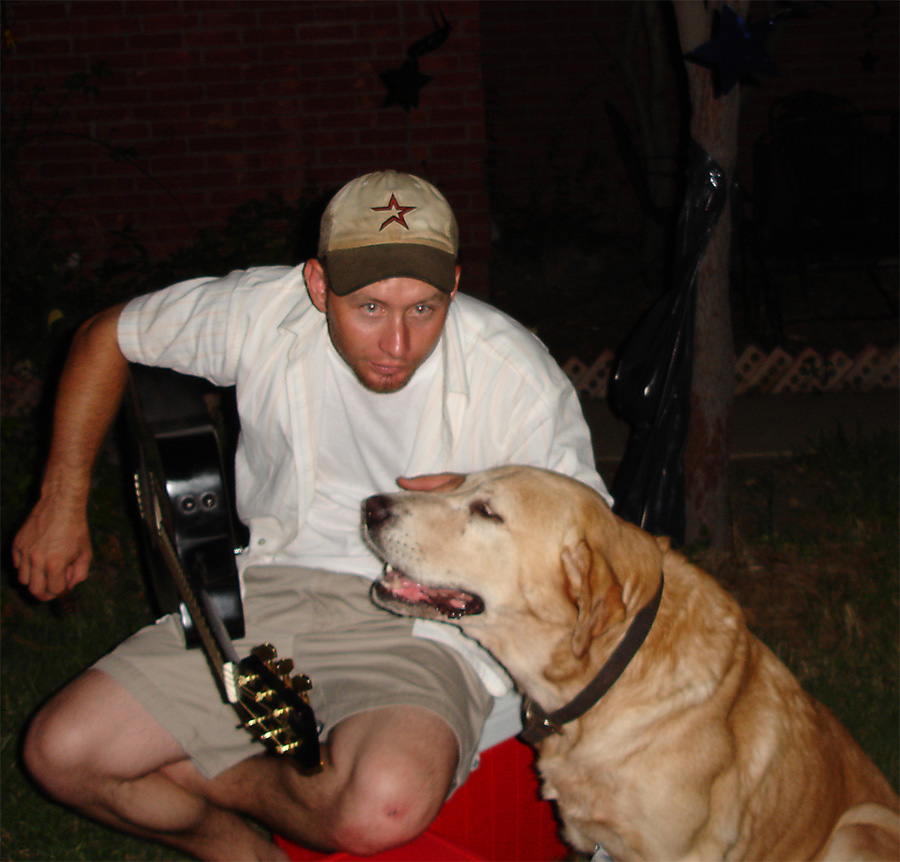