In the Garden of Beasts

The year is 1933.  Newly elected President Franklin Roosevelt must fill the vacant post of Ambassador to Germany.  No one wants the job.  Germany has a newly appointed chancellor, Adolph Hitler, and rumors of state-condoned violence are spreading.

After four men have refused his offer, Roosevelt settles on a little known, unassuming college professor from Chicago, William Dodd.  Dodd is reluctant as well.  He is a historian with a passion for the Deep South, and, after all is sixty-four years old.  After much soul-searching, he and his wife and two grown children set sail for Berlin.

Thus begins the remarkable story of an insider’s view of the rise of the Third Reich.  In the Garden of Beasts is bestselling author Erik Larson’s sixth book. He is best known for Isaac’s Storm, the story of the devastating 1900 Galveston hurricane, and Devil in the White City, set in late nineteenth century Chicago.  Larson is a master of contrasts and juxtaposed story lines.  In his Chicago book, he wrote of the magnificent planning and construction of the 1893 World’s Fair while weaving in the chilling story of local serial killer, H. H. Holmes.  In his latest work, he contrasts the pragmatic, sensible Dodd with the mania that has gripped Germany.  This time his subplot revolves around the dalliances of Dodd’s promiscuous daughter among both friends and foes.

The value of this story is the insider’s view of Hitler and his chief conspirators, particularly Hermann Goring and Joseph Goebbels.  We see the gradual rise and justification of the “Jewish Problem” as well as Nazi sympathy within the United States.  Dodd not only fights for respect within Germany but has to endure back-sniping and resentment from his own staff and leading State Department officials in Washington.  Larson paints Dodd in a sympathetic light, a man of insight whose warning of what is occurring in Germany goes unheeded. Larsen writes,

“How Dodd’s countrymen judged his career as ambassador seemed to depend in large part on which side of the Atlantic they happened to be standing.  To the isolationists, he was needlessly provocative; to his opponents in the State Department, he was a maverick who complained too much…To those who knew Dodd in Berlin and who witnessed firsthand the oppression and terror of Hitler’s government, he would always be a hero.”

In the Garden of Beasts is not a tale of adventure.  Larsen’s prose is understated and his style may be too pedantic for some readers.  But for World War II buffs who want an eyewitness account of the rise of Germany, especially Dodd’s personal encounters and impressions of Hitler, it is a fascinating read. 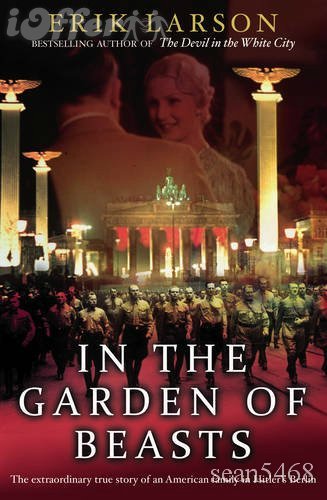