Parrot and Olivier in America

Parrot & Oliver in America is a wonderful book. The writing is incredible. It jumps off the page and wraps itself around you and pulls you right into all the action and adventure. It is funny and touching and compelling throughout. What a treat it was to read!

The title characters are as different as they can be. Oliver-Jean-Baptiste de Clarel de Barfleur de Garmont was the son of a noble French family. He was born in 1805 to parents who had experienced the terrors of the French Revolution. His mother had lost her father to the guillotine, and continually feared the same cruel fate would befall her only son. Her fears and the nightmare of her memories caused her to keep a cool distance from Olivier who loved her and craved a closeness she couldn’t give.

“I had no doubt that something cruel and catastrophic had happened before I was ever born, yet the comte and the comtesse, my parents, would not tell me what it was. As a result my organ of curiosity was made irritable and I grew into the most restless and unhealthy creature imaginable—slight, pale, always climbing, prying into every drain and attic of the Chateau de Barfleur.”

Olivier grew up in Normandy, in exile with his parents. He became just exactly what was intended for him to be, an aristocrat.

Parrot is John Larrit. He was the motherless son of a loving father, an Englishman, who was a journeyman printer by trade. He lived a very different life from that of Olivier, facing danger, deprivation, and hardship at every turn.

“In 1793 the French were chopping off each other’s heads and I was already twelve years of age and my endodermis naturalus had become scrubbed and hardened by the wind and mists of Dartmoor, from whose vastness my da and I never strayed too far. I had tramped behind my darling da down muddy lanes… My daddy loved his Parrot. He would sit me on the bar of the Kingsbridge Inn to let the punters hear what wonder came from my amazing mouth: ‘Man is born free and is everywhere in chains.’ It that ain’t worth sixpence what is?”

The two were an unlikely pair and they certainly disliked each other intensely, but they were brought together by a mysterious man who by strange coincidence was an important person in both their lives. This unusual circumstance bound them together and set them off on a life-changing odyssey. Olivier’s mother feared for his safety in Paris during the uncertain days of the Restoration. She arranged for him to be sent on a diplomatic mission from the French government, a trip to America to study the prisons in the new country. Parrot was sent to be his secretary and servant. The two of them together traveled America and studied the people, fascinated by their energy and enthusiasm and drawn—Olivier sometimes against his own will—into the free air of American enterprise and democracy.

“Here in this compartment [aboard a steamship] perfectly constructed for the contemplation of the American sublime, was placed the inevitable monument to democratic restlessness—a rocking chair…In America, everyone is in a state of agitation: some to attain power, others to grab wealth, and when they cannot move, they rock.”

Parrot and Olivier inevitably drew totally different conclusions about the merits of democracy. But neither could remain unchanged by what they had seen. Both made predictions about where the American experiment would lead. You can probably guess what their expectations were. Parrot and Olivier together narrate the story of their travels. Parrot dedicates their book to Olivier.

“I dedicate this account of our lives and travels to Olivier-Jean-Baptiste-de Clarel de Garmont in pretty much the same spirit that his mother, or more likely the Abbe de La Londe, offered him comfort during the fearful nights of his childhood. To him I say, in the fullness of my heart, sir, your fears are phantoms.”

The character of Olivier is based on the life of Alexis de Tocqueville who traveled to America and made a study of the culture and customs of the American people. The book he published about his journeys is called Democracy in America. The author of Parrot and Olivier in America, Peter Carey, is a two time winner of the Booker Prize, awarded for the books Oscar and Lucinda and True History of the Kelly Gang. 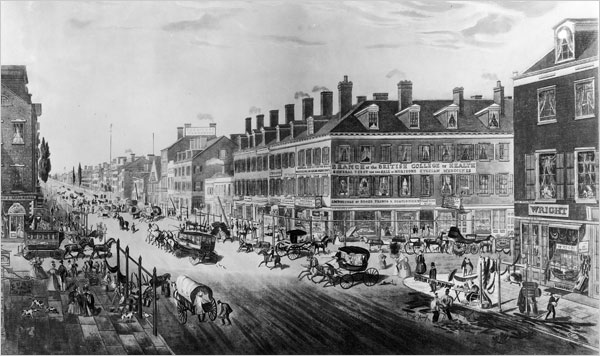