Chicken Janet and Her Chickens

It some parts of the country it’s fashionable to have a chicken coop.

I am fashionable these days, because I do indeed have a chicken coop.

Actually I inherited said chicken coop from my Mother, who once we got the farm, did nothing but talk about fresh eggs and her longing to have said fresh eggs at her whim and whimsy. Which meant she, or we rather, would have to build a chicken coop, supply the chickens, and then stand back and watch her gather.

We are good children . She got her chicken coop. She then promptly decided that after eating eggs for most every morning of her 70 some odd years, she no longer found them appealing. At all.

So me, having been indoctrinated on the dirtiness of chickens in general (by my father who excelled in indoctrination) became the chicken coop beneficiary, even if it was something I never wanted, had any intention of running, or could cross off any bucket list I have ever generated. (In fact, in might have been on the ‘I never want to do this” bucket list, should I have ever made one of those.)

Let’s speak a minute about chickens and dirty.

You realize this is legendary fact, this idea of dirtiness in chickens, evidenced by how big it figures in the annals of childhood insult hurling. I am of course referring to “Chicken squat, put in on bread, and you eat it hot”. I knew the effectiveness of this even before I understood what I was actually telling people to do. (I now realize a fair translation would be  “eat shit”.)

Against and despite all prejudice, here I was and here I am the proud owner of a chicken coop.

And don’t you know,  I like it. And I like them, those dirty chickens, squat and all.

In the strangest turn of events, I have come to have tremendous respect for these birds. I think it has something to do with a strange sisterhood (more on that later) and the sheer fact that they are some of the most resilient, self efficient, and self effacing creatures I have had the opportunity to become acquainted with.

Once a chicken reaches about 5 months old, every day of her life for the next 3 years, she’s going to give you an egg. She might take a little bit of time off on this egg laying activity, but not much. Through cold and heat, with nothing more than table scraps and bugs she picks out of your garden, she gives you an egg every day, which despite all the bad press is full of healthy, natural protein that can feed your children or be part of a cake.

Let me be explicit. Through the miracle of biology and evolution, she produces a neat, clean little package of protein, fresh for your kitchen, through the wonders of her female body, every day. Until she gets too old at which point you stick her in a pot and have her with dumplings.

I’m so glad I’m not a chicken.

But if I was, I could do worse, much worse, in the having-a-meaningful-purpose-on-this-earth category. And I can appreciate, in every way a female who has born children could, the  generosity that a chicken embodies, especially since, well let’s face it, there’s not much free will in her world and as far as I know, if maybe they are not discernibly happy, their chicken/dinosaur brains are content with their lot. Or at least they don’t know any different about their lot and until evolution changes their way of thinking, they seem to be all good.  I can tell you for sure mine are. I have found the key to their happiness. They embrace their dirtiness.

And so in turn, I embrace their dirtiness.  I start ’em out with dirt spas early. A shovelful of dirt into my coop and my chickens are all in the moment.

So here’s to chickens, those dirty, good girls who lay an egg every day, rain or shine, and look pretty dern chicky doing it.  Well, not while they are actually doing it.., but you know before and after and most definitely post dirt spa.

Should I invite you to a tour de coop, you should come. 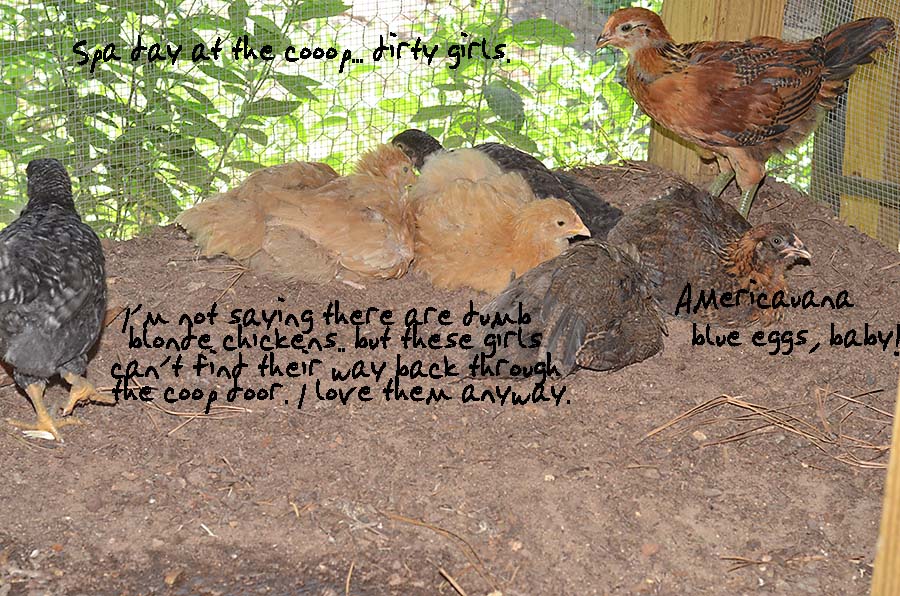