The year is 1974. It is morning on a hot August day. People are rushing to their workplaces or rushing home from the night shift. It is a great torrent of people, like every day in Manhattan. They are shoulder to shoulder, almost touching in physical space, but they are miles apart in the lives they are living. Suddenly one of them looks skyward, and exclaims at what he sees. In the crowd many just keep walking, never looking up for fear of falling for someone’s practical joke. But for those who do raise their heads to look, there is such a sight to be seen. A man has strung a wire between the twin towers of the World Trade Center. He is walking 110 stories above the street below. He doesn’t just walk, however. He runs back and forth, jumps, bounces, sits, lies down, and springs up again. He is a master of his craft and every bit the entertainer. He has prepared for this moment for a long time. The people below are mesmerized by the performance. For a moment they are lifted out of business, fear, loneliness, tedium, whatever chains them to the world, and they soar with the walker.

This event is the pivotal point for the stories in this book. The characters, though they have seemingly no relation to each other prove to be connected in unexpected ways. There is a once-idealistic judge, who is jaded by years of dealing with repeat criminals and a crushing bureaucracy; a graffiti artist; a group of women who are grieving for sons lost in the Vietnam War; prostitutes who wish for a better life for their daughters and a passionate priest who ministers to them in unusual ways; people caught up in violence not of their own making. There is group of guys in California working with what will later become the internet who hack into pay phones in New York to learn about what is going on in the city. They too have a connection to others in the story, even though they don’t know any of them. Like any mix of people you could find going to work on a summer morning, there are good and bad, greedy and generous, resentful, caring, cynical, and kind.

I really enjoyed the book. Colum McCann is a fine storyteller, and his writing is lyrical and appealing. The characters are richly drawn. The post-modern perspective had me talking back sometimes as I read. I really don’t agree with the general conclusion of the book, and I truly disliked some of the characters. Perhaps that conflict in my own head made the story even more interesting. I did find the stories of these people compelling and was particularly intrigued with the way in which they, like all people, were more connected to each other than we sometimes imagine. 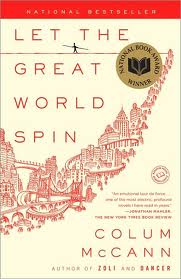