The Bookmobile is in your neighborhood: “Nudge”

Two months ago, around dinner time, Harvard University sent out emails notifying 2,158 clever teenagers that they had been admitted. Many of those teenagers will be taught economics this fall by Greg Mankiw in Harvard’s equivalent of Econ 101. Mankiw was George W. Bush’s chief economic advisor for two years, and is (so my econ-graduate-student friends tell me) very influential and distinguished. He also runs a smaller seminar for twenty lucky freshmen. Demand significantly outstrips supply, so the twenty freshmen are chosen by lottery. Mankiw posts the reading list for the seminar online:

Nudge, by Richard Thaler and Cass Sunstein, is the sixth book the lucky twenty read this year.

If you are a Democrat who doubts the recommendations of Bush’s go-to economist, I have a different hook for you. Sunstein, Nudge’s co-author, has been working for Obama for the last two years. He is in charge of instructing federal agencies on how they should make decisions. Given that Mankiw and Obama vigorously disagree on most issues, their agreement on Nudge suggests the book is worth considering.

The book itself starts by discussing recent psychological research on how humans make choices. One of Nudge’s examples is a school cafeteria. Thousands of research hours have been spent making tiny adjustments to cafeteria layouts, observing how each adjustment changes what ends up on the eater’s plate. Let’s focus on this one particular result: the earlier a food is in the lineup, the more it gets eaten. If you are a school official and you know this fact, you will realize the importance of choosing the presentation order of the food on offer. You are what Thaler and Sunstein call a “choice architect” — you construct the environment which influences the choices of those using your product. By putting, say, the french fries earlier, you can “nudge” the students to eat more of them.

What environment should you design? You might worry about your right to influence others, and so decide to determine the order at random. Or instead, you might act like a supermarket manager and put the most profitable items up front. Alternatively, you could put the healthiest choices first, knowing that this would be best for your students. You are not forcing them to eat healthily, they can still pick up their french fries later on down the line. Instead, you are leaving them free to choose, though in an environment designed to help them choose what is best for them. Nudge’s central claim is that this is what you, and public officials in general, should do.

The first part of the book describes how people make decisions, detailing the various ways people can be nudged. In the rest of the book, Thaler and Sunstein describe the bad nudges our government currently gives, from mortgages and prescription drugs to public schools and organ donations. Then, they talk about how to replace those bad nudges with better ones.

Throughout, I found the book entertaining and stimulating. If the ideas above sound interesting to you, then I think you would like the book as well. It will certainly make you more aware of what can nudge you, and how you can nudge others. 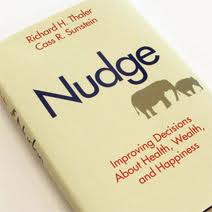