We had replaced the toilet and sink when we redid the old farm house, but the tub… oh my, the tub. A heavy cast iron thing, over the last two years we had used it, it had gotten worse. And while I recognize there is an internet movement afoot to keep the 60’s pink tile bathrooms alive and well, I just never got into it.

So I asked him, Silent Bob, “I think I will redo the bathroom. What do you think should be the color scheme?”

He didn’t hesitate a minute. “I like the Lanier Theological Library look,” he said.

“You know, kind of like Steak and Shake”, he confirmed, as if those two examples should make it clear.

The Lanier Theological Library is beautiful. Patterned after libraries at Oxford, the bathroom has a bit of old English going for it. Dark beautiful, hand hewn wood planks, gleaming fixtures, and a little black and white in the tile work.

I am fast trying to reconcile this with what I remember Steak and Shake’s look like.

I consider trying to get a little bit more info out of Silent Bob. Having been married somewhere between three and four decades and with a certain truce between us about what it means to be Silent Bob and Chatty Janet, I ask no questions and if it be a dream of Silent Bob’s to have a farm bathroom that is a cross between LTL and S&S, I’m all about that.

Here is what I tried to do with pink. 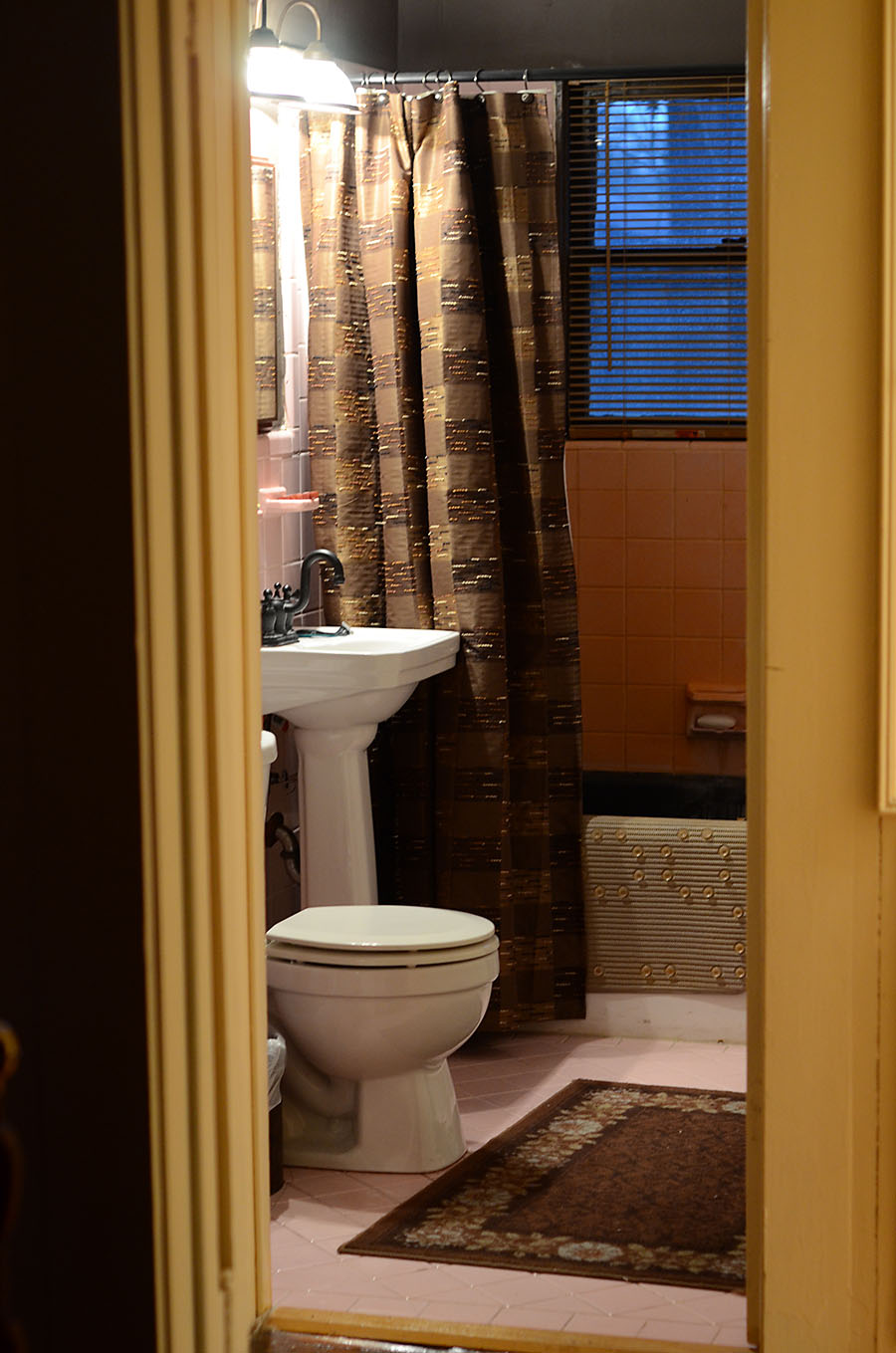 Not looking so bad, until… 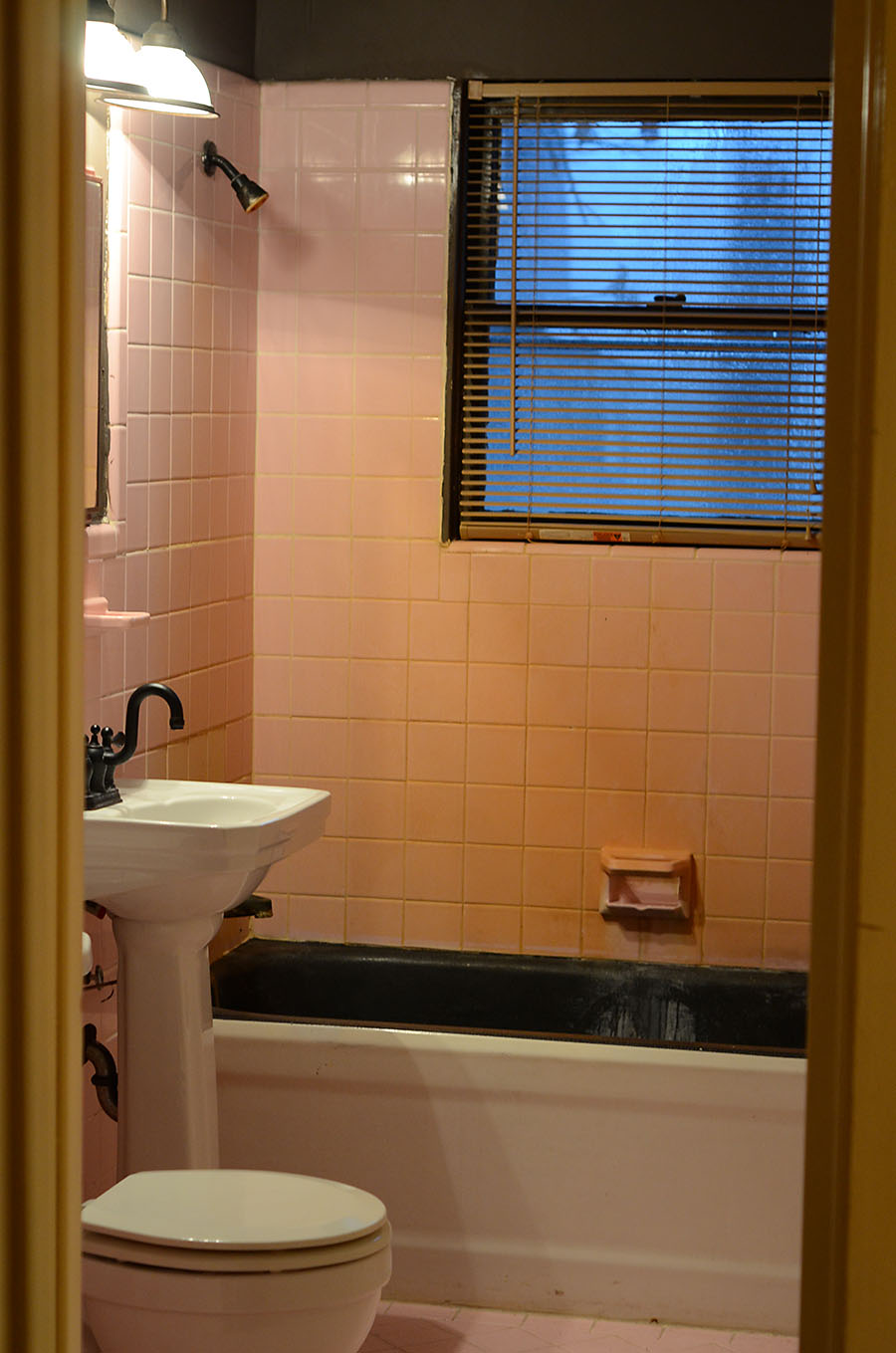 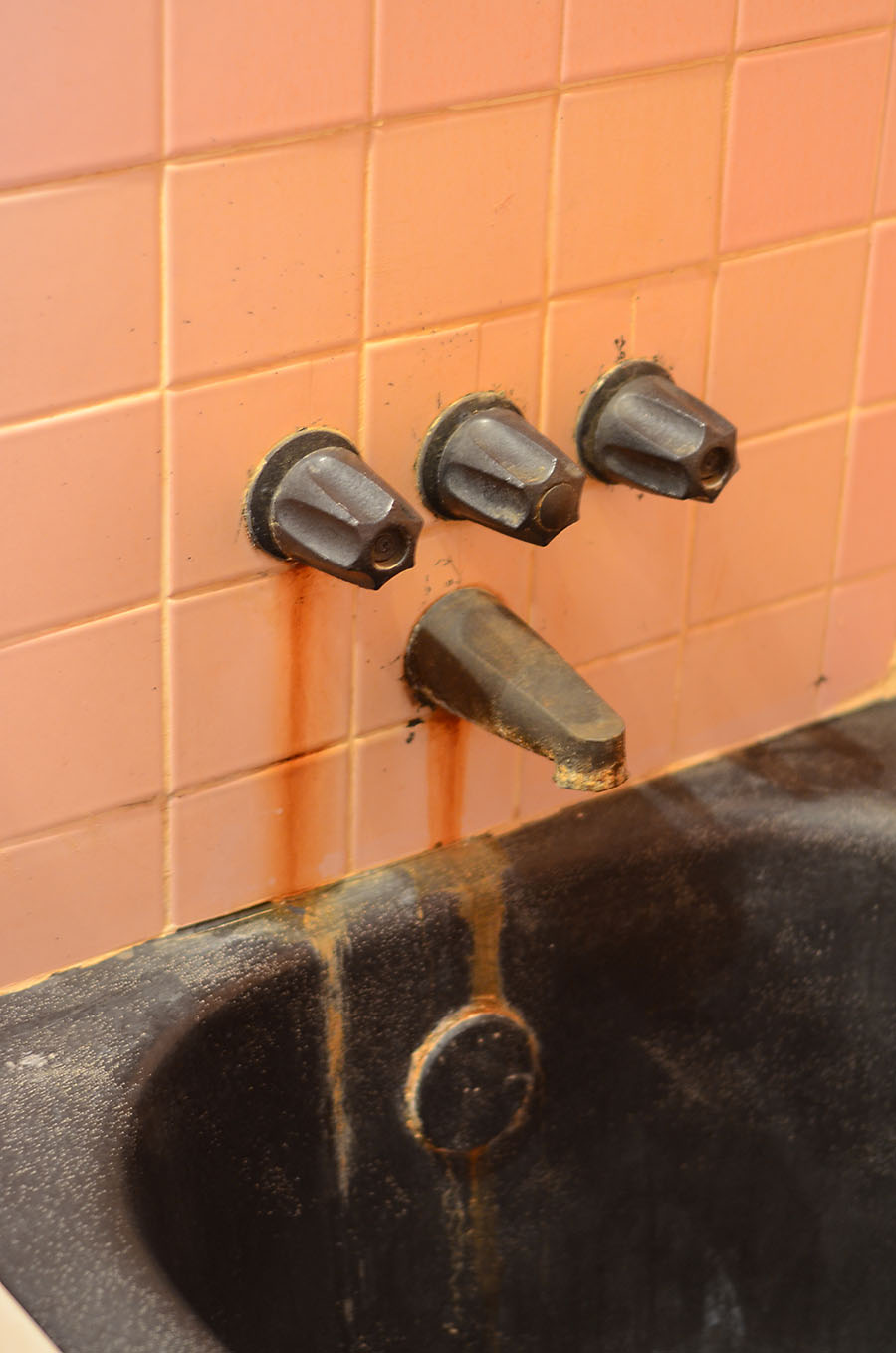 I mean, if you’re a bath person (which I am) who can really get the most out of a hard day of cowgirlin’ soaked off in this? I ask you.

So my friend Dan and his son Michael told me they would put the tub in that Dan had found for me over a year ago. 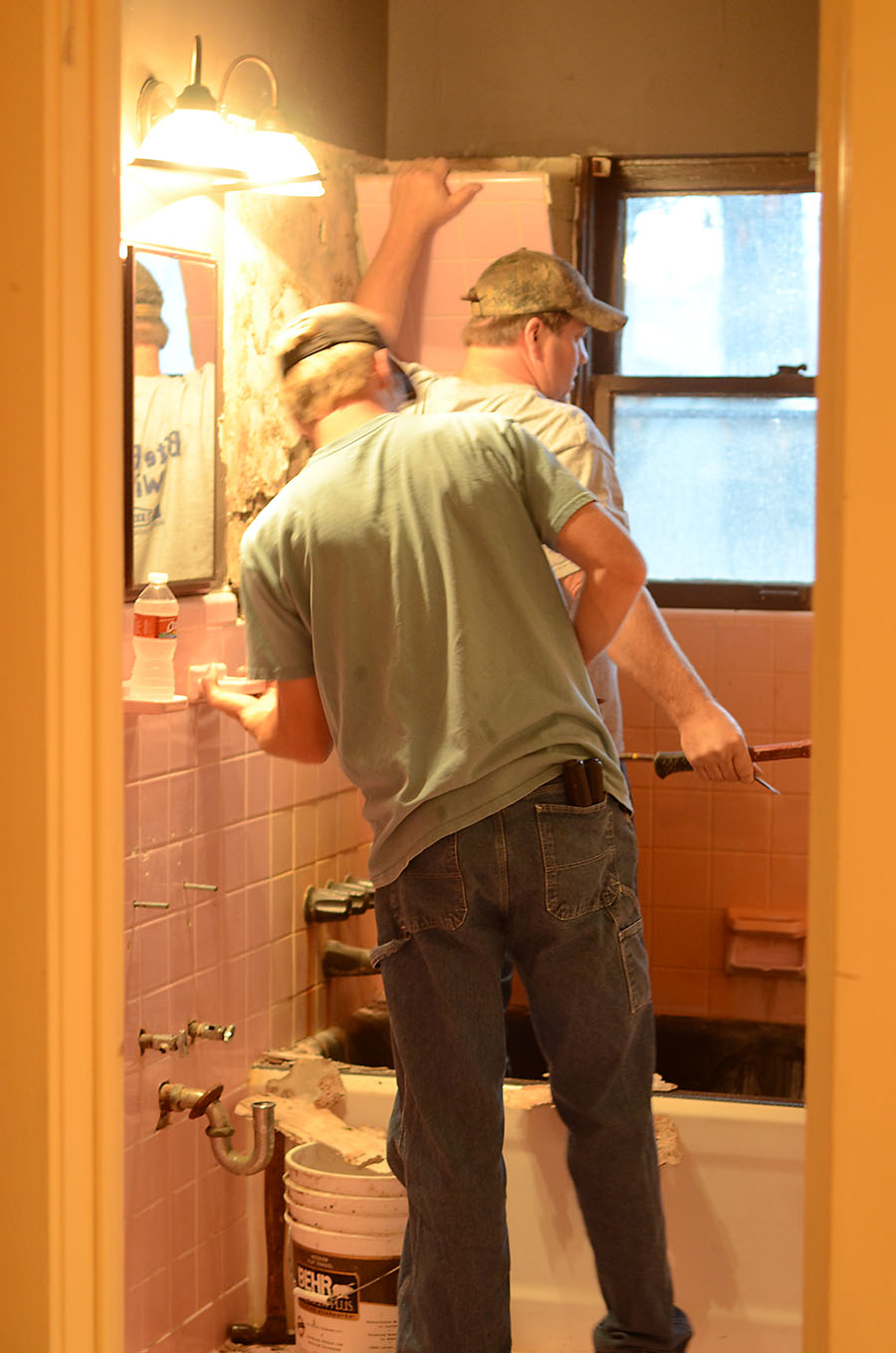 Old cast iron tubs, which are the BEST soaking kind (have I mentioned I’m a soaker?) are heavy, So Dan toook a sledhammer to the old one and I am NOT going to tell you what I have been soaking on top of the last two years… (for you city folk, that would be a rat’s nest…) 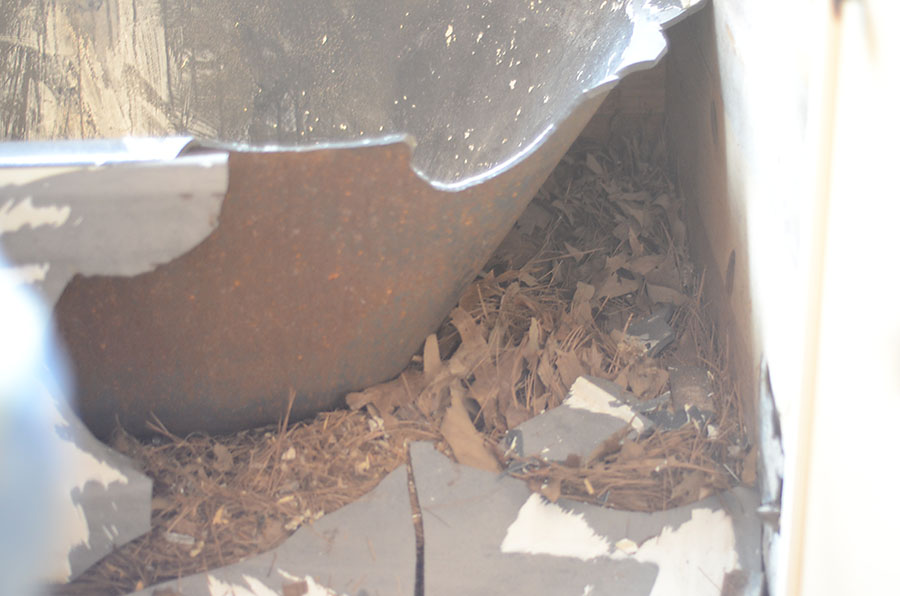 And Dan, being the carpenter artist that he is convinced me that we should go down to whatever was underneath that pink tile, start way back at 1930’s shiplap, which is exactly what was under there, and build back up. 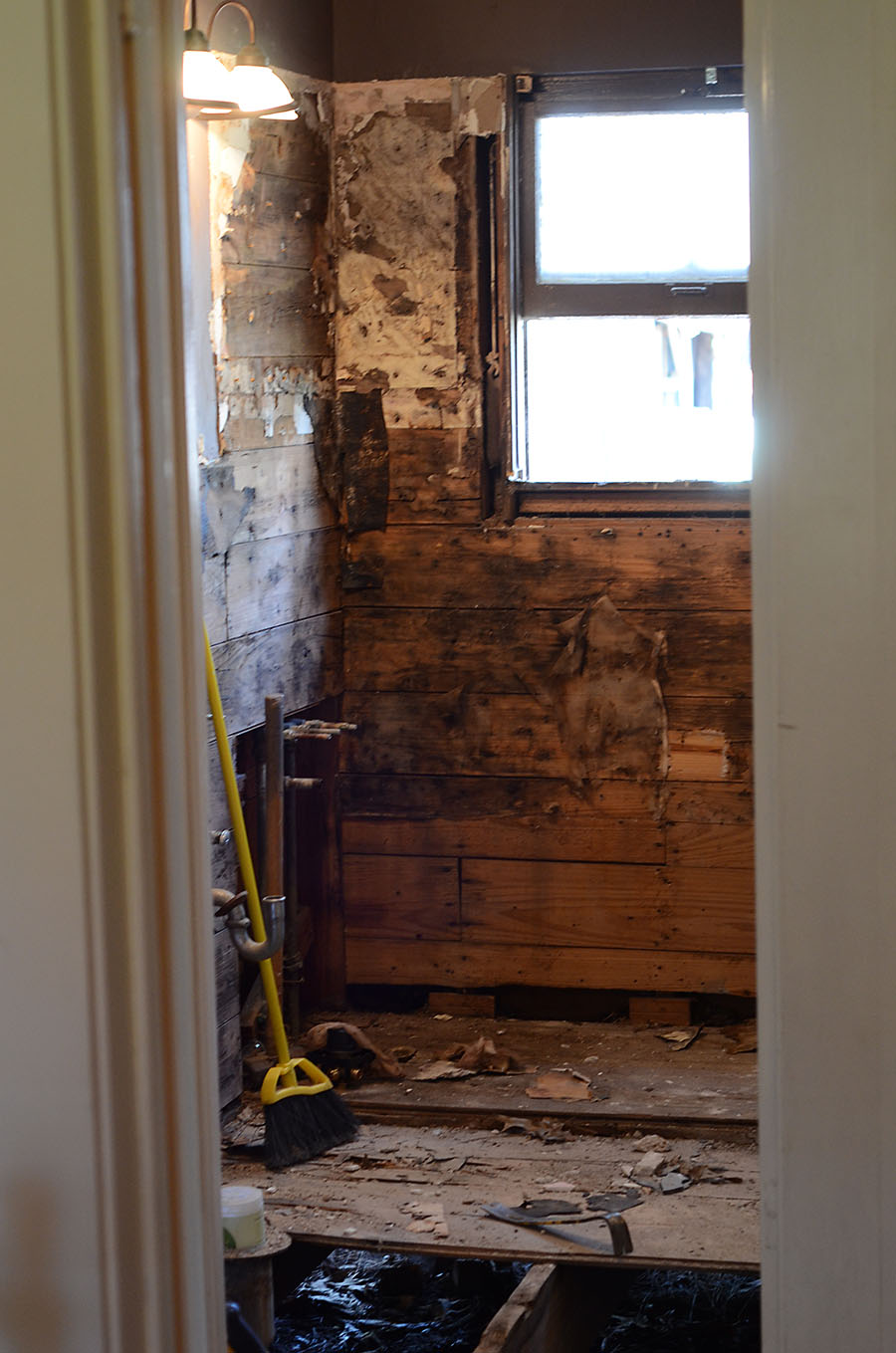 They used toe sacks and pieces of broadly woven cloth over this wood and we found bits of old, very old wallpaper over that. This was before sheet rock and certainly sometime after having taken this picture, at which said point in time, I fell through the rotten floor.

Dan and Michael were concerned for my safety. Or so they tried to convince me while they were laughing.

There was a TON of tile work to do… let me just say for the record, I am NEVER doing tile again… CAN YOU HEAR ME?!? NEVER. 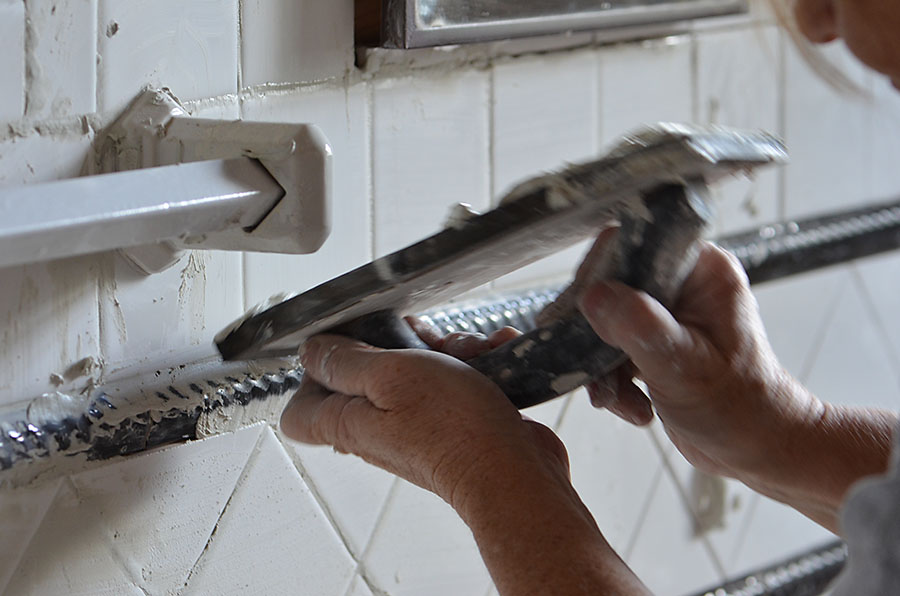 My sweet brother tiled the floor.. He is soooo gooood… 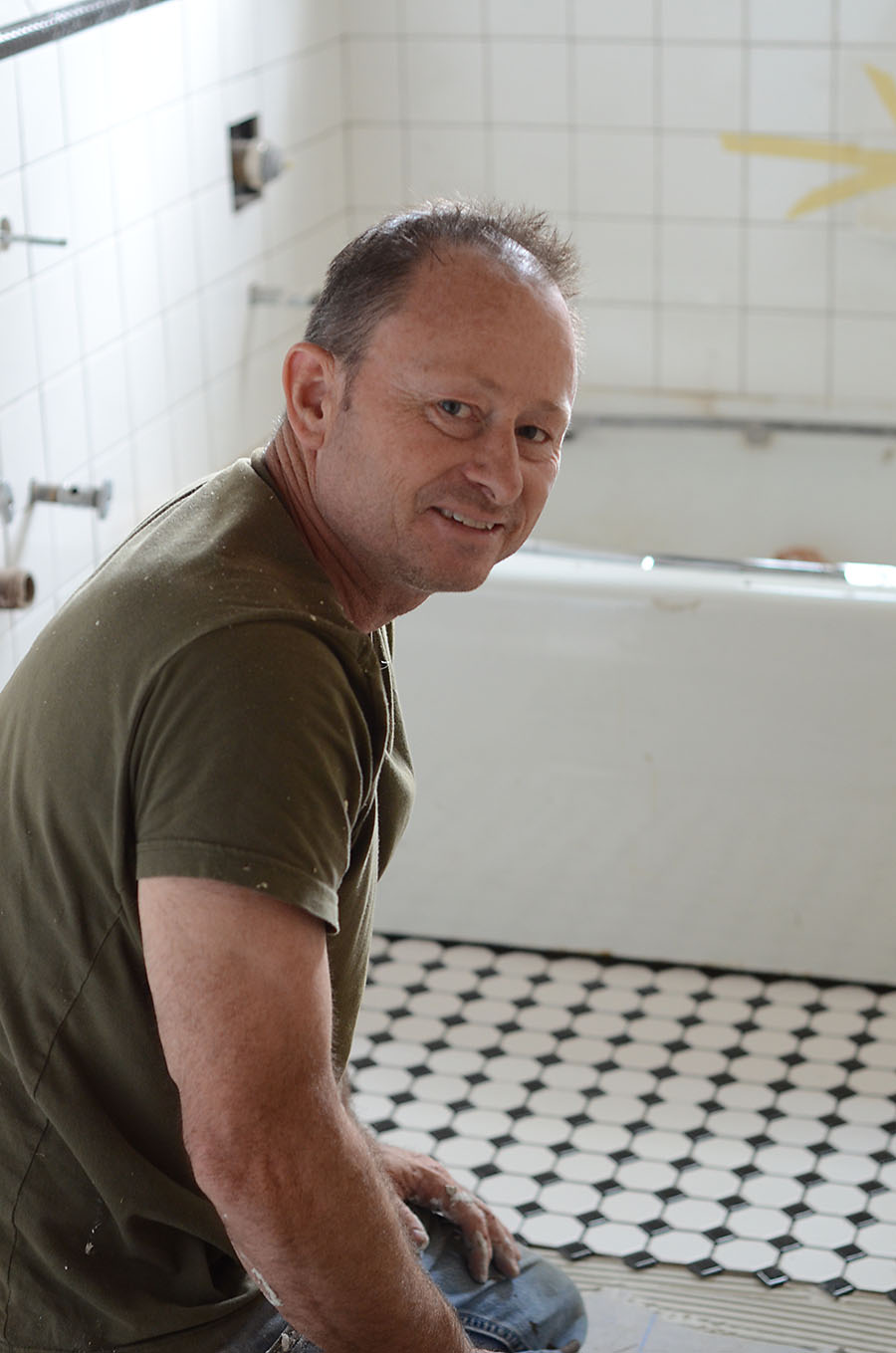 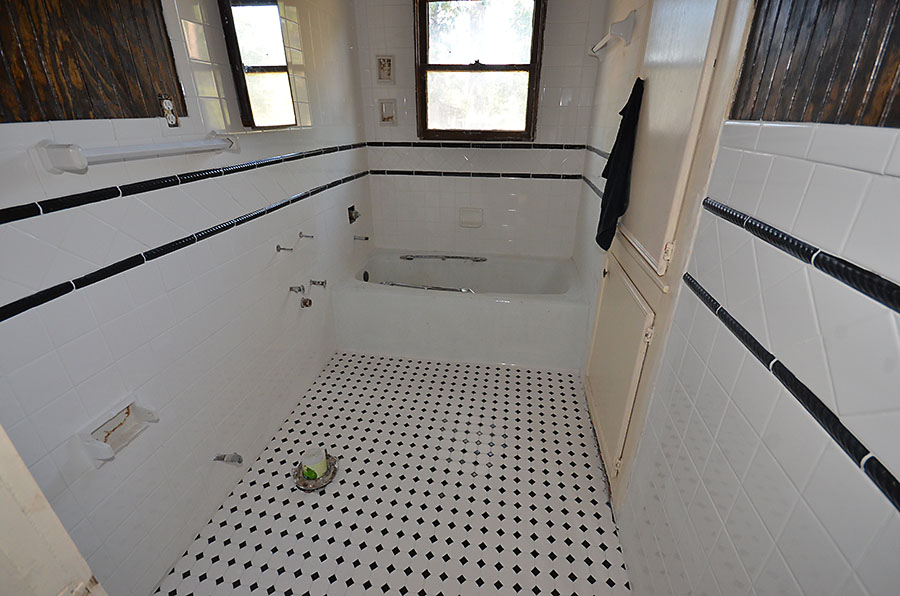 Well.. there ARE a few things missing.. 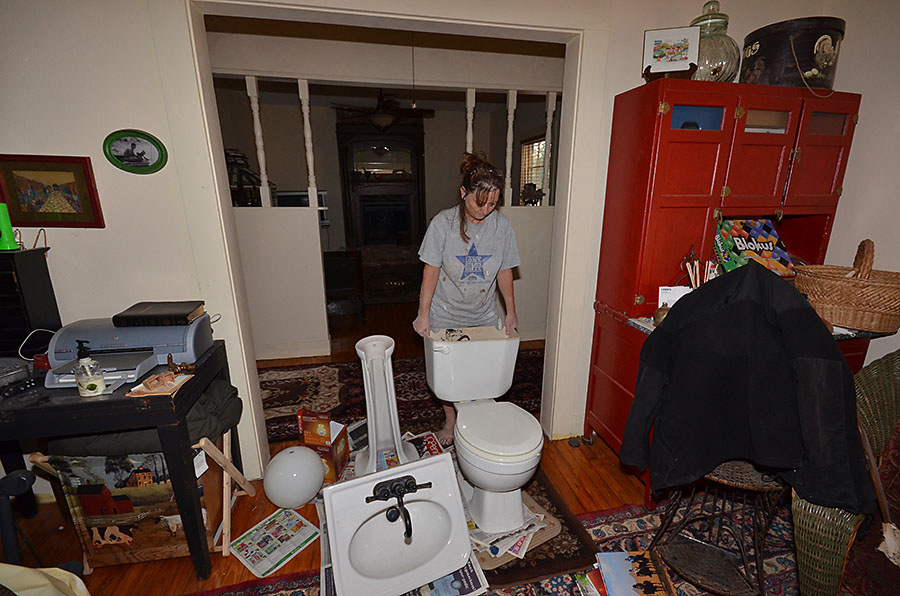 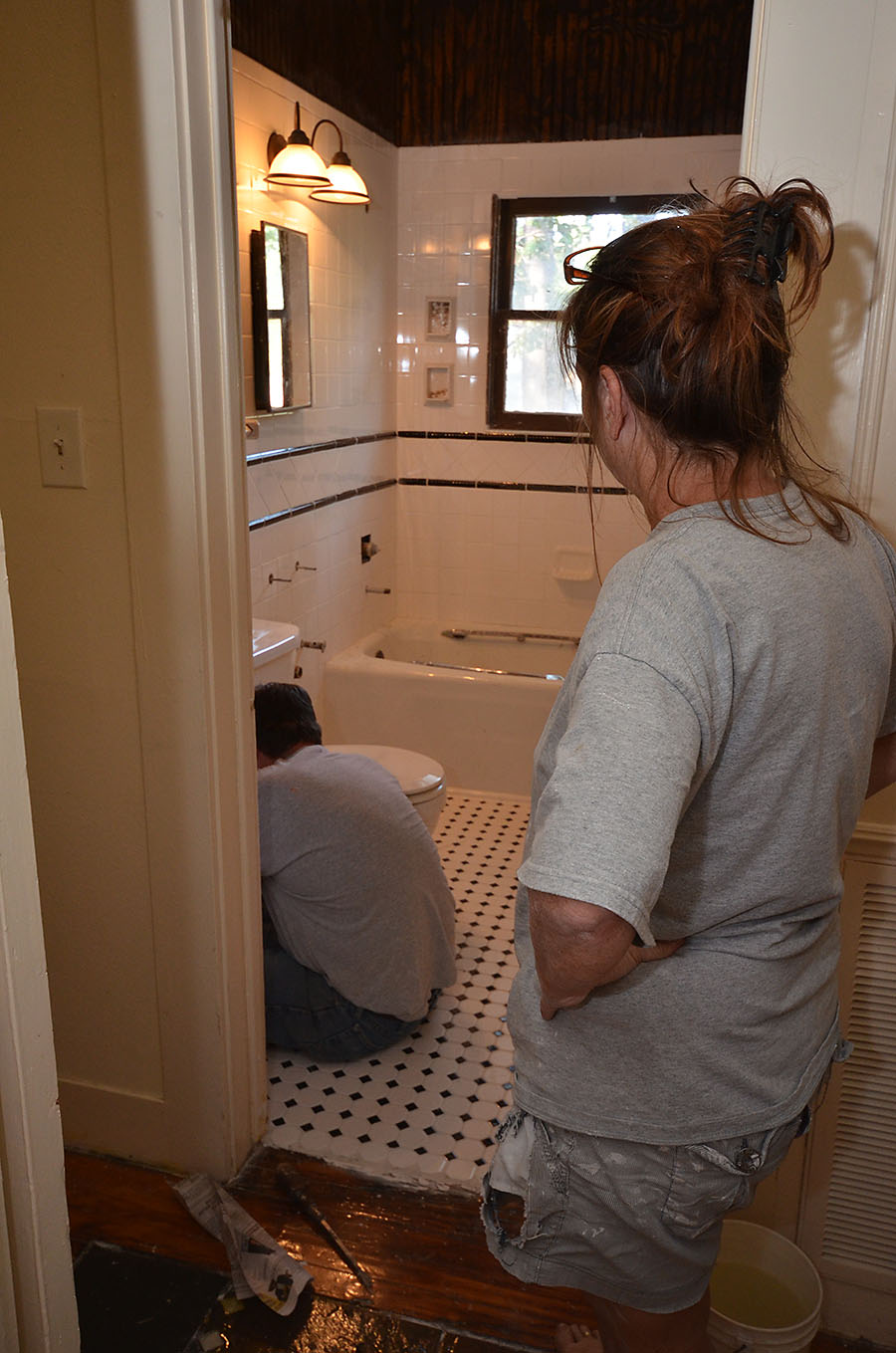 …. and Voila! Just makes you want to soak, don’t it? And just so you know, its a perfect blend of the LTL and S&S… in my opinion. 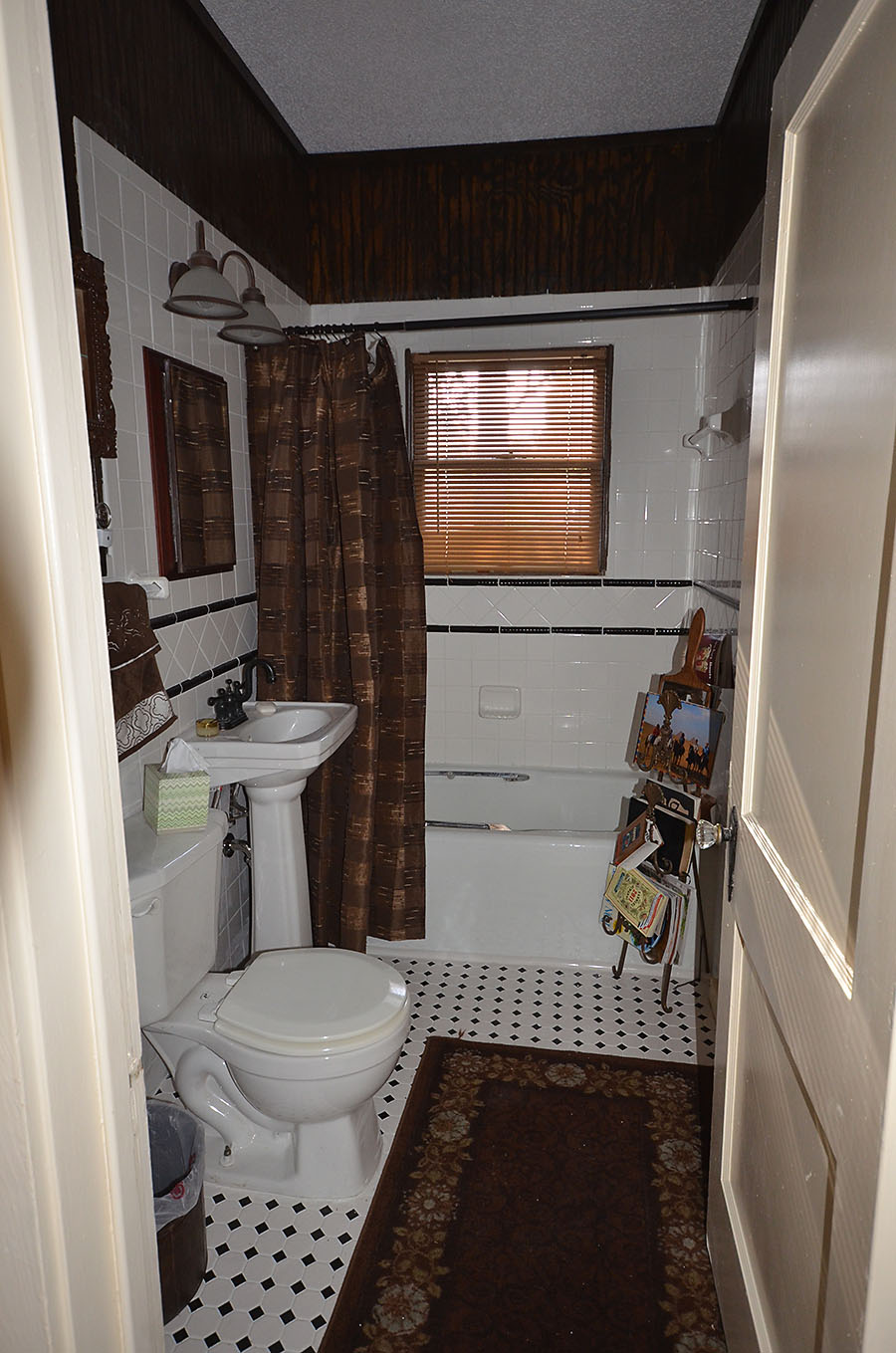