I walked through Wal Mart and there it was again, staring me in the face, a young man’s butt cheeks barely visible beneath the thin pair of boxes he wore. I could see them because while his hand was at his crotch, gathering up the front of his regular britches like a poor kid who didn’t have enough sense to fashion a belt to at least keep his waist band from falling around his knees, the back of his pant bagged well below where his butt cupped into his legs.

I think for the zillionth time, “Why?” (I have opined on this topic before, but this time I am way more strident.)

Let me state for the record, I believe in youth. I think there is both a metaphysical (read spiritual there) and evolutionary reason they are what they are and they do what they do. Despite the fact that their brains are soaked with such powerful chemicals as puberty assaults them that it causes them to be less than logical until about the age of 21, it also provides a certain vibrancy and passion that this world literally can’t do without. Like many things in this human adventure, we, the old people, need the young people. But let me tell you, it works both ways and this is one of those intersections of passion and wisdom that you need to think about.

Yes, we need you, Z or M or whatever else generation! I need you! But for heaven’s sake, while you explore who you are, among the stupid, sometime glorious, frequently amazing things you do, could you please not show me your barely clad ass.

Let me tell you why.

First of all, should I need help and you are the one around to assist me, if it involves running, and I so counting on your vitality youthful vigor to protect me should i ever need it, you are going to be absolutely NO help. Worse than that, you are probably going to be a danger to yourself.

Second, I bet you pass gas. I am not interested in breathing in those gaseous molecules, which are coming directly from the lower regimes of your alimentary canal while I walk behind you in Wal Mart or any where else we are publicly found in somewhat close proximity. With little to restrain them but a small barrier of loosely woven cloth, I shutter to think if they were neon colored what the air around us would like that. More than that, I have no idea what your personal hygiene is or how diligent you are at your toilette. Let me just say that poop, your poop, has bacteria in it. And because it’s kind of designer made and personal to your colon, I don’t want to be exposed to it should you scratch yourself, touch a doorknob, or sit on a McDonald’s bench that I might choose to sit on, you’re a walking fomite, for heaven’s sake, BECAUSE YOU AREN’T WEARING ENOUGH CLOTHES OVER YOUR BUTT IN PUBLIC.

Seriously, turn this thing around. Would you want to sit, touch, or otherwise be exposed to things that might emanate from the nether regions of my alimentary canal?

I didn’t think so…

Please, do this for me. Do what the ‘next generation’ has always done. Continue to push the envelope, I like that, I count on that, but in your more reflective moment, recognize how idiotic saggin’ is, for both of us.

Put it this way. I was this close to walking into Walmart, my blue jean bottoms dragging the floor, as I pulled the back of them down below my butt cheeks and grabbing the crotch of them to push my way past you and give you a little taste of your own medicine. I thought about dragging in reinforcements, other middle aged women, older aged women, heck old women, ready to sacrifice intimate views of their undies to make the point. I didn’t because I think there’s a chance of arrest due to public lewdness or public display of insanity.

Think about it… it is what it is no matter whose butt its on.

Next week: It ain’t just the boys I got advice for – Whales Tails. 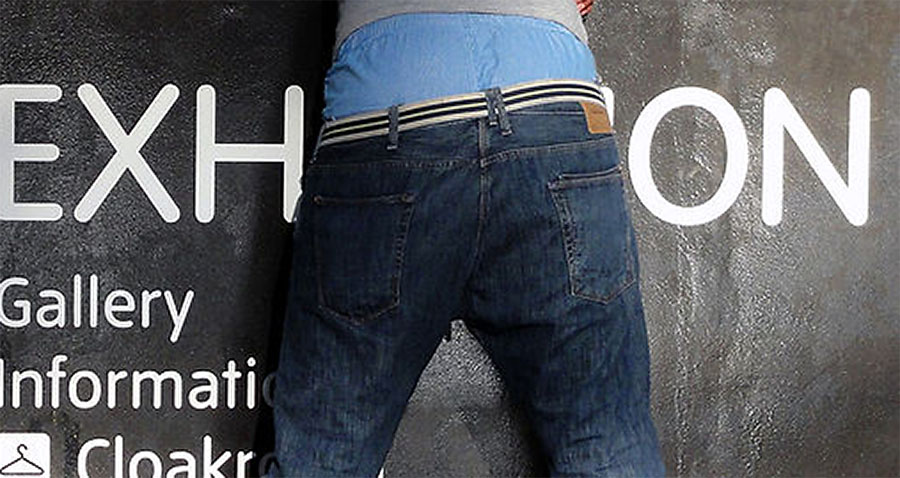