Growing up, I liked Connie’s house. It was grand. Her dad being a preacher an all, they moved around to parsonages and in this particular move, the house they lucked into was a two story, double staircased, window-on-the-stair landing, beauty. It was my pleasure to stay the night at her house.

Connie was rail thin and tall and on the excitable side. We had pears and cottage cheese salad on the weekend nights I stayed over. This salad was something new to me. There was something else new to me that I learned from Connie on my sleep overs. She liked to wear a girdle. She liked it so much she wore it while she slept.

“Connie, what is a girdle supposed to do?” I asked her, in my memory, ready to understand.

“It makes you feel all together,” she explained, unsatisfactorily.

“What part of you doesn’t feel altogether?” I asked her, totally unconvinced and a little bit concerned now that I knew this proclivity. “You need to feel altogether while you sleep?” I continued.

“Maybe you should just try one,” she said happily, completely unconcerned that I was beginning to look at her as if I didn’t know her.

“I don’t feel like I’m not together,” I told her. “Connie, you know how you told me you don’t go to the bathroom but once a week?” I added, adding up a number of things about Connie that sleep overs makes one privy to, “I think it’s the girdle,” I announced happily, as if this solution would convince her of several things. “Maybe the girdle is keeping things all together that aren’t supposed to be kept together,” I finished triumphantly.

“I don’t think so,” she said, her eyes curiously eyeing me, almost like our discussion was none of my business. “I don’t go to the bathroom but once a week because it takes too much time to go more times than that. It has nothing to do with a girdle. A girdle makes you feel as if nothing is going to move between your waist and legs when you walk. You don’t jiggle.”

“Because they keep you from jiggling,” she said matter of factly.

“Does Dad not want you to jiggle?” I asked absolutely incredulous. What is with this jiggling problem? I was considering watching a few more female butts, to see if I could figure out who jiggled and who didn’t and if they didn’t were they wearing protection against their tendency to jiggle.

“Janet, you ask too many questions,” Mother said, a bit exasperated. I was not the daughter she thought she would have and if I could have read her mind, I am certain she was thinking I was the daughter her husband had in mind.

I surreptitiously looked at girdles in the department stores. For the life of me, I couldn’t imagine anyone voluntarily wearing something that constraining for any reason.

A few years would pass, girdles out of mind, Connie with a new best friend, and me needing a destination to which to ride my new 10 speed bike, I chose Ovea’s house, about 10 miles from mine. Ovea was my Dad’s mother and I was her favorite. Ovea, liked to drink, chain smoke and sit around in her underwear. She was tiny by all accounts except for one; she had a huge stomach extending from just under her ample breasts to about two inches below her belly button. She was either chronically 9 months pregnant or she was gestating cirrhosis of the liver. All indications pointed to the latter. It was on one of these bike rides that I happened to be over at her house, watching her puff on her cigarette and drink her toddy, that she sitting in her underwear, mentioned she was going to get dressed and call her a cab to go downtown. Trailing after her, with cigarette ashes and smoke leaving a wake about her, we moved to her dusky old bedroom. In the recesses of her closet she pulled some two piece grandmotherly thing out to wear, placed her cigarette in an available ash tray, and dug into her lingerie drawer. In her bony, tar stained fingers she held her girdle.

For the next few minutes I watched, amazed.

There are only two things a girdle can do and both have to do with whatever is already there. If you are thin, they can make you… well, continue to look thin. (In some cases, you will gain the added benefit that nothing is going to move, in the case of some people, for a week, which to some minds is more than the opposite of benefit). If you are not thin, then whatever it is you are trying to corral into the girdle is either going up over the top of the girdle or down below the tail end of the girdle, or both. In the absolute worst cases, part will go up and part will go down and part will bulge in the middle.

Duh, conservation of mass, physical rule of the universe…

Girdles don’t get you pass this one girls.

Ovea looked like an ill formed sausage, with breasts, from the front. I am not sure what she looked like from the back. We could probably assume not much better.

So imagine my wonderment, given the decades of female empowerment, Oprah, Simmons and Schwarzenegger, and here we are full circle, back to where we started, perhaps boneless, but nonetheless, faced with slimming intimates, better known as Spanx.

Perhaps we are supposed to be more enamored with the slightly veiled sexual innuendo inherent in the name. Perhaps there is verified market research that, indeed, men like women who don’t jiggle, so therefore you should do what you can to accommodate.

Perhaps I’ll air just air up my bike tires. There are women in this world who think if they jiggle, it’s meant to be. And this woman, yeah, I be her. 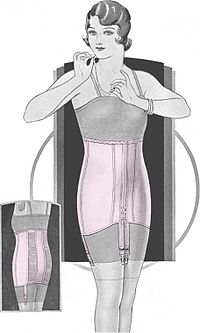