A little more about Daisy

I don’t know what Ovea did to my Dad. Ovea, my paternal grandmother, also answered to “Huddle”, which was her last name. Calling her either of those names suited her. She was either an unhappy woman or a mean one and anything else that would imply more endearment would probably be lying. Ovea or Huddle, in and of themselves, conveyed nothing more than identity. One could be less inflammatory, unless you knew her that is.

The other thing, she hated my Dad. Maybe it was because he was her middle child or maybe because he looked like her husband, who she also hated and remain married to until he died. Whatever the reason, that momma hated that child and as is bound to happen, did some damage to that son. (She actually damaged all of her children, but this one was my Dad and just as the Good book says, we all pay for the sins of our father, or grandmother in this case, through 4 generations. Lord help us, seriously and really.)

One of the things she must have done was make him hate cats. I don’t know what it was about cats that made her do this. I suspect that by nature every single person on the planet, if without pre-conceived notions and in the case of no allergic reaction, see cats as one of the most touchable animals in the kingdom. Their soft fur begs to be stroked. However, given that Dad’s native bent was overcome at an early age, I can only guess what horrific psychological games she played with her son. She probably told him it meant you were gay if you felt like petting a kitten. Yeah, that’s how mean she was.

So you know what happened. Dad promptly relayed cat hate to his own children. As I said, it’s just darned hard to escape your upbringing. Keeping right in line with that Biblical curse, I promptly conveyed hate cat to my own sons.

Along with this hate came good solid evidence of why you should feel that way. The argument was the following: if you and your cat and your dog were in a room together and you died, the dog would die with you and the cat would eat you. That was obviously the problem-with-loyalty argument. That was bolstered by the cats-are-nasty-and-can-make-you-sick argument. Cats have lots of worms and will lay their wormy poo in your sand box. You will get those very same cat worms when you make your sand castles because you will get said cat poo on your hands upon which time you will mistakenly but most certainly stick your worm casting infected hands in your mouth or pick your nose. This provides for unprecedented inoculating opportunity to your previously healthy self with all manner of parasites. This process can be evaluated (and in our case as children was) by pointing a flashlight at your butt, during the middle of the night, when the little creatures come out for air.

I don’t know about you, but ewwwhhhhhhhh…

Like a lot of things in life, though, while most of this is true, it is a one-sided argument meant to sustain a view. And given that cats are one of God’s creatures and we currently have one of God’s most lovable versions, (that would be Daisy!) let’s go to the other side…

It turns out that one of the other things that makes a non-prejudiced cat lover want to be around cats, is that really strange thing they do. They purr. They might not talk, but they vocalize at that consistent purring pattern at a frequency between 25 and 150 Hertz, every time they breathe in and then out.

As you might imagine there are some tax dollars going for research that help us to understand purring. Actually, the tax dollars are more about understanding osteoporosis, in old people and in astronauts. It’s one of those places where science, from a bunch of angles, converges to give an interesting conclusion. Research indicates that sound frequencies in exactly 20 – 50 Hertz can improve bone density and promote healing. How so you might ask? While it’s not entirely clear but it has something to do with those particular sound wave vibrations acting a little bit like mechanical forces on bone. They are just-right-oscillations for the way our bones are made. When bone and muscle do ‘work’, both are healthier. (Think astronauts riding stationary bikes and cute little old ladies lifting dumbbells.. think of this little old lady if you like.) And it’s a lucky happenstance that cats, in their constant purring, generate those sound waves.

I love the way God made nature and is evolving it every day.

The next time you are around a cat, and its purring, just picture your bones getting a tinier bit denser. If you have an ‘Ovea’ in your life, get over her and decide not to propagate the bad things handed down to you. 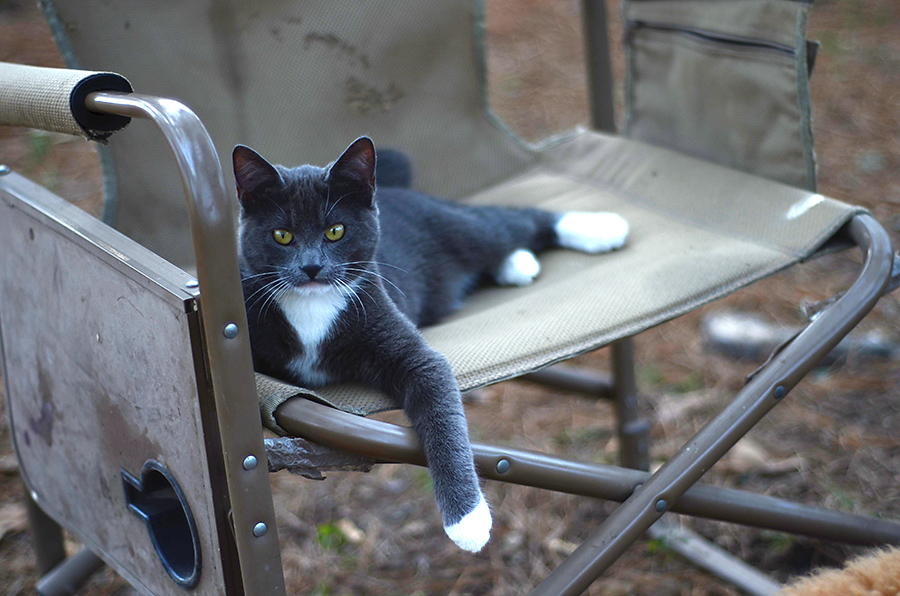