On August 23, 1939, Germany and Russia signed a secret non-aggression treaty known as the Molotov-Ribbentrop Pact. According to the terms of the agreement Poland was to be divided between Russia and Germany, roughly half and half, with the western division going to Germany and the eastern portion to the Soviets. On September 17, 1939, the Red Army invaded Poland. While we are well aware of the oppression the Polish people suffered under the Nazis, we seem to be less familiar with their struggle under the cruel repression of the Soviets.

The Ice Road is a non-fiction account of one family’s fight to survive the deportation, forced labor, illness, and countless other hardship that so many Eastern Europeans had to face. Stefan Waydenfeld was 14 years old and living in eastern Poland when he and his parents heard the expected but dreaded pounding on the door in the middle of the night. They were told to gather their belongings, and they were taken to the railway station where they were loaded into cattle cars filled to overflowing with other unfortunates. They were locked in and left for hours to wonder what lay ahead for them. Finally they were told that they were being sent back to German occupied Warsaw. In the morning, however, the rising sun told them a different story. They were not traveling west to Warsaw, but east into Russia. Their destination, unknown to them at the time, was a Stalinist labor camp, a timber operation on the western edges of Siberia.

This is an amazing true story of bravery and resourcefulness, of family, friendship, and love. Mr. Waydenfeld is such an engaging storyteller. He relates his experiences in vivid detail in a conversational style with a lot of humor and wisdom. In reading I understood the pain and desperation they must have felt, but at the same time I was cheered by their optimism and hope. One duty to which Mr. Weydenfeld was assigned was construction and maintenance of the Ice Road. It was literally a road of ice that was used in winter to move timber out of the deep woods. He worked in a team with three others that included his dad, his friend Helena who was his age, and a Russian foreman. They worked all night, about twelve hours and sometimes longer, every night on the road. First they had to build it and then maintain it, keeping it slick and free of snow. The night time temperatures were colder than -40 degrees F. I shook my head in wonder. How could they do it? It is hard to imagine people bearing up under such brutal circumstances, but they did it with unbelievable courage, always looking out for each other.

In June of 1941, the invasion of Russia by the Germans put an end to the deportations. The people in the labor camps were given amnesty, but that certainly wasn’t the end of their troubles. They had no place to go, no way to earn a living.

Mr. Weydenfeld’s story takes us from the Archangel Region of Russia, to the Caspian Sea, through Kazakhstan and Uzbekistan as he and his mother and father along with their friends sought work and a place to settle, always dreaming of the day they could escape the Soviet Union and the Communist Regime. Finally with great difficulty the family made their way to Persia, Palestine, and Italy. Then with the end of the war they finally found a new life in a new land.

This is an amazing story that inspires and surprises all along the way. For me it was a real education about a period and place in history that was somewhat unfamiliar. I think it is a remarkable book. 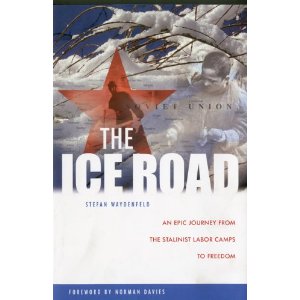