Becky, a friend of my heart, has this most amazing hair. She swears she has it because her dad shaved her bald when she was seven. Apparently she developed some sort of nervous habit of pulling whole locks of it out and her country doctor dad figured that relieving her of the ability to continue the activity was the most expedient method of curing her of what could be a very bleak Southern girl future. (He had four daughters. He had to be concerned about this.)

Beck swears it made her hair thick. She swears the truth of this happy outcome to me over and over because I am bound to request she tell me this story repeatedly. I like to hear it for two reasons. I like how she tells me how her hair came to be as thick as a horse’s tail. She’s all Southern girl comfort and confident when she tells it, displaying no self consciousness, and it’s clear how desperate her dad was to stem the, well, let’s just say it, disturbing habit. After she tells me the story, I say, “that’s just an old wives’ tale, that just not possible,” and she will respond adamantly, “well it sure is exactly what happened.”

I also like the story because it’s just got enough of the ‘really drastic’ measure to it that someone of my hair quality might grasp onto as a last hope and resort, if it was possible that there could be any truth to it whatsoever.

If Beck’s hair would require an industrial size rubber band to corral its mass about 3 inches in circumference, mine would do with one of those little rubberbands that they put around the teeny tiny umbrellas they put in umbrella drinks when they ship the umbrellas in a matchbox-sized box of a gillion from China.

Having neither the fortitude nor the courage to try a complete shave, I am a sucker for any chemical intervention and coating my fine, stringy, mousey brown hair with chemical color has been my most consistent strategy.

Let me whine a bit.

Picture this: I am in a roomful of lustrous headed females, in various states of ‘getting their hair done’ and those getting theirs cut already have a pile, I am talking a pile, of hair below their feet. Each of us has the requisite mag in our hand that verifies their isn’t a female movie star in the world with limp, prone to oily, fine baby hair. Nobody. And there I am, sitting in the chair, Lon whacking away on my hair while infinitesimally small, straight as a board, tiny end clippings float delicately down at my feet.

My pile is small.

No, more than small. I try not to be intimidated.

Lon speaks in Vietnamese to his wife and don’t think that I even begin to miss the expressions of sympathy on their faces.

“Janet, what do we do today,” Lon says, knowing I hope he has a miracle up his sleeve.

“Let’s go red,” I say, full of defiance and bravado.

“Does red make it thicker,” I ask.

Lon lets me believe what I want. I love a man who won’t lie to me.

He can’t let this one pass though.

“You are blonde. I’m not sure why you want to try red,” he says, shaking his head in doubt.

“Freckles, duh,” I think to myself as I watch the pretty little blonde next to me, toss her hair and when it falls back into place, she looks just like one of those Garnier commercials. She’s obviously worth it. Oh whatever…

I sat back in the chair and let him minister. I closed my eyes and in all the noise of his shop, all the chatter and gossip, for all that every woman had on her mind that she was sharing or holding in, I closed my ears and let my own mind wander back to years before when I didn’t seem so concerned about thin hair.

I thought about that time when motherhood was what was was in front of me, hormones still racing through my body as eggs matured, ready for the miracle of three precious sons I would bear, son-loves of my life. I wandered back to a time when earthly presence was about some people that are no longer part of this reality, but were mine then.

When I got home I rummaged through my old albums. I took a lot of pictures back then, of every step and dribble and smile that graced my life with those three boys, whose lives were nothing but promise and guarantee.

“Father in Heaven, did I cherish every moment, enough, of that time?” I said in conversation with Him, catching my breath as the Jake-shaped hole in my heart ached, that one that will only be filled, once I get to Heaven. Odd, I think, it almost seems like my heart tore a little again.

“Are you cherishing now?” God said back. “Janet,” he said, acting all incredulous but really not- He was doing his gentle reminder thing, “you really thinking about your thin hair today. Come on girl. Now really.”

“By the way, red’s okay,” He said, with a smile into my heart that must be like what it was when He smiled on the universe as it was being built.

I looked at this picture. I remember that day. My heart swells a bit thinking about those two in Heaven, that whole I mentioned, shrinking just a bit.

“Granny Belle and Jake say Hi.” God says. “By the way, take that picture to Lon the next time you go, I thought you looked good in red back when I was doing it for you.” 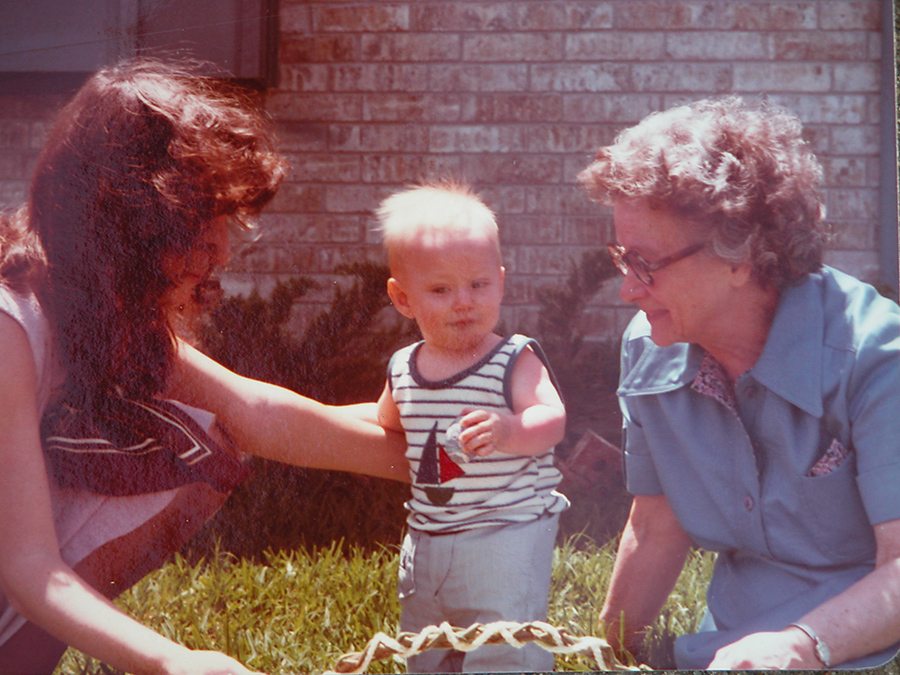