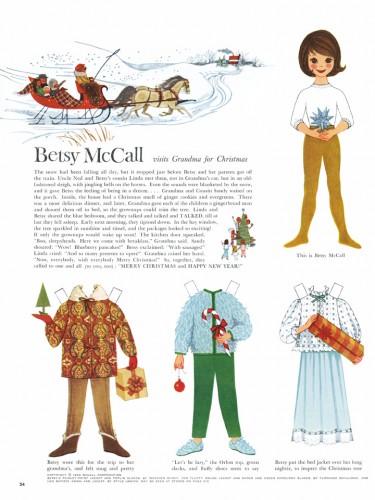 I was never good at playing with dolls.

Mostly I didn’t get it.

It’s possible that it wasn’t so much the dolls as it was the imagination that you had to employ.

I couldn’t get from the plastic or hard rubber and sort of creepy-eyed baby facsimile to the pretense that it was crying or wetting or whatever else little girls were supposed to imagine their dolls were doing.

It seemed awkward and silly to cradle them.

I thought I had the problem solved when I asked for a Chatty Kathy doll. She had a plastic ring attached to a string, that when you pulled it the length from the back of her neck, she said things. Talking has always made sense to me.

I don’t remember what she said now. Maybe she asked me if I was her mommy. I am sure I didn’t respond.

I spent about an hour, pulling her string, looking at her weird baby doll hair and set her to the side.

I tried once more and asked for a Barbie. In my house, you had to be careful about falling into the trap of doing something just because it was the fad thing to do. Thank goodness they made a brown haired, much more mousey version of curvaceous Barbie. I got a Madge doll.

While not being able to make the jump from rubber baby to mommydom, I could quite imagine acquisition of clothing in many and varied forms for dolls that were going on dates. There was an element of practice involved in this activity and even if blossoming womanhood was somewhere ahead of me, it was close enough.

There was one hitch. Having a Madge doll meant that you should imagine she was going on dates.. with Ken, although it was never clear to me whether that was okay with Barbie. Ken was rather on the creepy side anyway and despite my inability to imagine some things, I was more than okay on imagining a new and improved version of hunky boyfriend for Madge that had nothing to do with Ken and probably not all that much with Madge.

I concentrated on collecting clothes for Madge.

It wasn’t long until I tried my own hand at fashion design for the seriously long legged, tiny waisted, busty Madge. (Clearly, they used the same body mold for both B and M, managing to reiterate quite effectively that it surely is blondes that have more fun). The major problem with my elementary attempt into clothing manufacture for the seriously small waisted fashion doll was fastenings. Not even the smallest snaps made sense. They looked like weird mechanics on my even weirder concoctions.

At about this time I realized that there was another option that required little to no construction skill.

The paper doll option appealed to me. We’ll not go into too much analysis on the fact that I became enamored with dolls that confined their reality to two dimensional representations of humanity.

The problem was they were almost impossible for me to come by.

McCalls, was a monthly American women’s magazine. Aimed at married women who were homemakers, it published fiction by such well known individuals as Willa Cather and John Steinbeck. Eleanor Roosevelt even wrote a column for them until her death. And then in 1951, Betsy McCall paper dolls were printed in most issues.

McCalls, one of the ‘seven sister’s’ service magazines, and I have no idea how much it cost or where you could buy it, I just know we didn’t have it. The only local acquisition point for me was on the very street I lived, a local beauty operator who ran a shop out of the back room of her house. Mrs. Haymes availed herself of her own services, sporting ever thinning and permanented curly, carrot red hair. Her thin hair went with her ever thinner body. Her parlor smelled of ammonia and there was a harrowing contraption that sat in the corner, dusty and with massive numbers of insulated electric wires and coils and tubes. She was strangely vague on exactly what its function was. Ominous and slightly torturous looking, I hoped every time I went there that she may have gotten rid of it. Either that or I would see it being used and be relieved that it indeed was something that was supposed to be in a beauty shop. After taking a quick gaze, which always revealed that the thing remained collecting ever more dust, my eye traveled to the small end table that served her waiting customers. Every month, like clockwork there lay the newest Mc Call’s Magazine.

I’m not sure how many times I asked Mrs. Haymes if I could have Betsy’s page. I don’t think she ever gave it to me. No matter her consistent ‘no’s’ to my plea, I didn’t give up. I’d go knocking on her door, every month, pretending to come and visit, doing my best to steer the conversation towards any possibility that I might gently cut Betsy’s page out and take it home. I entreated her with the creative potential I had in mind for my own designs of Betsy’s clothes. (I had already figured out that drawing clothes on paper was much less demanding than actually constructing garments.)

She never gave in.

The truth of it was, I probably wouldn’t have been satisfied with just one months, it wasn’t just one of them I wanted. I wanted the collection.

Thinking about it now, the whole doll thing just left me with a lot of wanting.

Make believe is make believe and dolls, flat or otherwise are only what your mind can let you imagine them to be.

And no matter where your mind can take those little girl dreams, it’s the truth of real babies, mine and yours and those you love that fill our lives with the joy and memories, that even now as I sit here, at Pinekot Farm, with the cold morning air all around the little brown house, with Christmas right around the corner, my heart is every grateful to one.

Its God’s baby, wrapped in swaddling clothes and lying in a manager that makes me happy, that fills my heart with gladness. That fills me with hope, knowing his Father always gives the things I need. It’s Christ, the babe who would die for me. And you.

But Santa, if you are listening, Betsy’s online, you could stick a few in my stocking, you know just for ole time sake…