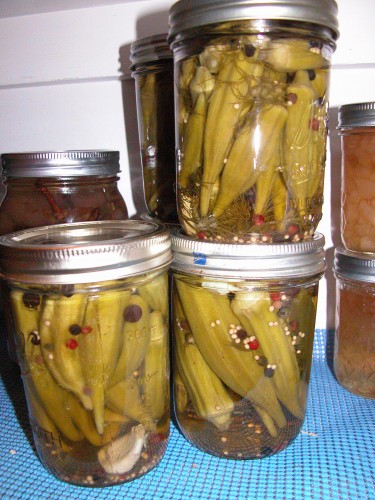 The Promise of LadyFingers

This summer I planted one row of okra, about 20 plants, that started bearing their little seedy, green pods the first of July.

They have been steadily producing, every four days providing a reasonable mess of the little ladyfingers, for all these months.

Of all the things in the garden, they have demanded the least.. and given the most.

They seemed to grow overnight, when the little bit of rain settled the dust around their stalks. When there was no rain, they still grew.

When nothing else was managing to set its fruit or vegetable, there was always a handful of okra to gather.

All summer long wee have eaten them in peas and we have fried them. We’ve boiled them and ate them slimey. We have put them into homemade soup and I made okra muffins. We froze little packages, sliced neatly for whatever a winter meal might bring.

And then a friend, someone I really like, asked me this, “Would you pickle some for me?

I chose the most tender pods and over about a month, trying and testing two different time, I tried my hand with canning the pods, seasoning them with pepper pods and cloves of garlic and fresh dill weed.

I had no idea how they might turn out.

I had to leave them on the shelf for two weeks.

I have been watching them and this weekend, for Thanksgiving, I gave them a try.

My middle son loved them. He’s a hard critic.

I checked the plants all around the farm today to see what light frost had done to them over the weekend.

Nothing was left in the garden. Not even the okra. Their yellow mallow flowers, the few that remained, looked as if they had been burned, the ice forming in the tiny cells of leaves and stems rupturing and turning them black in less than a day.

Their tall, pithy stalks stood sentinel, like old canes in a field that someone forgot to plow under.

The little yellow flowers that have steadily progressed up those stalks all summer long, through heat and drought, are no more.

I won’t get any more okra from them.

They are finally gone.

The thing about gardens is that the largess is temporal. It’s up to you to eat what your garden gives you, when it gives it to you, and if you have the mind and the wherewithal, to pickle some for just a special time, when winter comes and the promise of a garden’s provender is the guarantee that spring is sure to follow the repose of winter.

In the mystery that is nature and okra seeds, I am hoping that maybe, just maybe, some little seeds from cast off pods might have found their way into the winter dirt of my garden, waiting, for the spring sun and rain.

And maybe, just maybe, they aren’t really done. In a way that only the promise of nature never ends.

I have two jars of pickled okra to give to my good friend. I hope he likes them. I made them especially for him. I liked that he asked and I liked that I could give him what he asked.

Some days life is all about seeing the promise.