In this season when we focus on all the blessings we have received, we can never forget or take for granted the freedoms that we enjoy. Reading Lolita in Tehran certainly serves as a stark reminder of what happens when those freedoms no longer exist.

Azar Nafisi studied literature as a graduate student in the United States. At school she enjoyed sitting with other Iranian students and engaging in heated conversation about the politics of Iran. They opposed the U.S. support of the Shah and were thrilled when he was deposed. They envisioned positive reforms in their government, and did not see the danger in what was ahead.

After completing her degree, Azar returned to Tehran and began her career as a teacher of literature at a university in Tehran. She taught a popular course in Western literature, but it wasn’t to last long. When she refused to wear “the veil” while teaching, she was forced to leave the job that she loved.

Eventually, of course, the veil and robe became mandatory for all women in Iran. The freedoms of women were greatly curtailed, and the women became anonymous, silent figures in the neighborhoods of Tehran. Not wanting to give in completely, Azar invited several of her best female students to meet secretly in her home once a week to read and discuss books that were systematically being banned by the new regime. Together this group of women risked arrest and imprisonment to study the works of Vladamir Nabakov, Henry James, Jane Austen, F. Scott Fitzgerald and other important figures in Western literature. They read from the perspective of women who had suddenly been made powerless, their lives totally controlled by others. As they read, they saw themselves in the books. They drew strength and courage from the heroines who stood up for themselves and found a voice in repressive circumstances. Azar taught them to see how reading could be a type of salvation for them all.

I was fascinated by the stories of these women, each distinct and different, but all the same in their desire for dignity, for the privilege of not being invisible. There is so much that draws me to this book: Azar’s own memories of her experiences, her descriptions of the young students, and the actual literary analysis of the various books they read. It also gives a good description of what life is like for men and women under this fundamentalist regime. The book is non-fiction, but it reads like a novel in plot and character development. I do not believe that you can read it and be unmoved by the experience. You will definitely be counting your blessings. 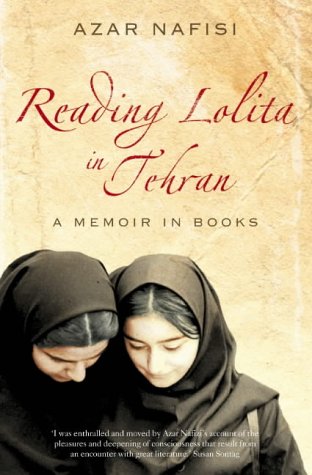